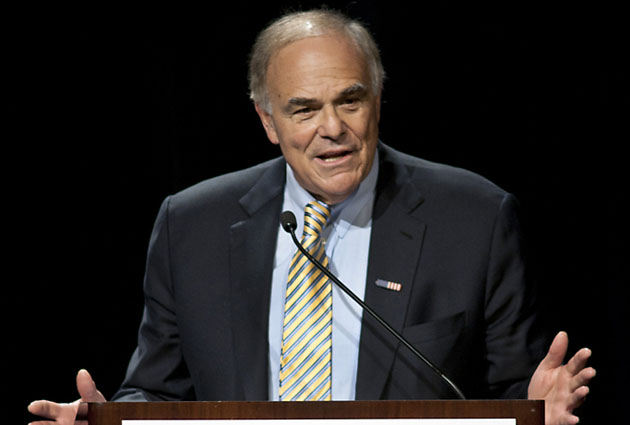 As New York Gov. Andrew Cuomo agonizes over whether to allow the controversial natural gas drilling technique, Rendell invoked his own experience as a Democratic governor who presided over a fracking boom. New York state, Rendell argued, has a major part to play in the nation’s fracking “revolution” 2014 and it can do so safely. He rejected what he called the “false choice” of “natural gas versus the environment.”

What Rendell’s passionate plea failed to note was this: since stepping down as governor in 2011, he has worked as a paid consultant to a private equity firm with investments in the natural gas industry.

The op-ed piece was widely noted in other media outlets, and Cuomo wound up being asked about it during a radio appearance on Wednesday. The New York State Petroleum Council promptly issued a press release hailing Rendell’s “strong and confident argument.”

Reached Wednesday, Rendell told ProPublica that he should have disclosed to the Daily News his work at the private equity firm, Element Partners, and that the newspaper “should have included it.”

Rendell said the Pennsylvania-based firm pays him about $30,000 per year. Still, he insisted he is not conflicted on the issue of fracking, in which water and chemicals are injected deep into the ground to extract previously unreachable natural gas from rock. He said he does not own equity in Element Partners or any fracking companies.

“The only conflict would be if I had a pecuniary interest in the natural gas industry doing well, and I certainly don’t,” he said.

Element Partners’ website lists several investments by the firm in natural gas companies, including a company called 212 Resources that specializes in “fluid management systems” for fracking.

Rendell is also a senior adviser at the investment bank Greenhill, which has worked on several large transactions involving natural gas companies. A Greenhill spokesman said Rendell has not been involved in the firm’s work in the energy sector.

“I have no brief for industry,” Rendell told ProPublica. He said he supports fracking because of the potential for American energy independence and jobs.

“If we choose to embrace natural gas, it will help us get past a number of significant economic and environmental challenges,” Rendell argued in the Daily News op-ed. “On the other hand, if we let fear carry the day, we will squander another key moment to move forward together.”

Daily News opinion editor Josh Greenman said in an email to ProPublica that he was unaware of Rendell’s relationship with Element, and indeed had been assured by Rendell’s representative that there was no conflict.

“Had I known, I certainly would have disclosed that and conceivably would have made a different judgment on the piece,” Greenman said.

The Daily News has now added a disclosure line to the online version of the op-ed.

This isn’t the first time Rendell has popped up in New York advocating for fracking. The New York Post ran an interview with Rendell in November in which he said Cuomo would be “crazy” not to lift the fracking ban. That piece didn’t mention Rendell’s ties to the industry either.

It’s worth noting that since leaving office, Rendell has been a vocal supporter of fracking around the country. He’s weighed in in support of a regulated fracking industry in venues including Huffington Post; the Nightly Business Report; a Manhattan Institute forum; the Austin, Texas, PBS affiliate; and a Wall Street Journal conference with businessman T. Boone Pickens.

Here is a clip from the Journal‘s 2012 ECO:nomics conference, in which Rendell says the burgeoning gas industry is “great for America in so many ways.”