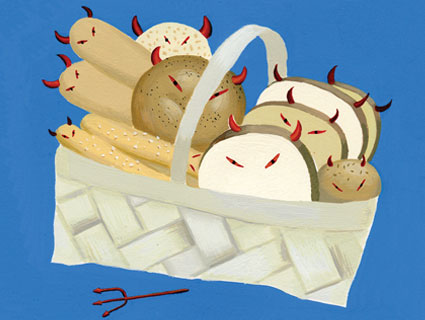 Editor’s note: Gluten intolerance has been quite the hot topic this week—for more on the subject, see this New York Times piece on the uptick in cases of gluten sensitivity, or this other one, which mentions gluten as a possible trigger for inflammation that worsened a little boy’s arthritis.

A few months ago, I visited a well-meaning but ineffective chiropractor. I was seeking relief for pain in my hip, but she seemed much more interested in my mental health.

“Do you ever feel stressed?” she asked.

“Well, I think you should try a gluten-free diet for that,” she said. She then pulled out a prescription pad and wrote down the names of a few specialty food manufacturers.

I nodded agreeably, quietly resolving to chuck her note into the nearest recycling bin. As gluten-free breads, pastas, and cereals have proliferated over the past few years, I had begun to suspect that so-called gluten sensitivity was not so much a medical condition as a nutritional fad.

A few days later, though, I rediscovered the note in my purse and out of curiosity decided to Google one of the brands the chiropractor had written down. “Many people are finding that they feel better on a gluten free diet, and not just the people who have Celiac Disease or a Gluten Sensitivity,” claims the website of Udi’s, a leading manufacturer of gluten-free foods. “People report increased energy levels, as well as a better ability to focus.” It goes on: “The biggest reason to go gluten free when not medically required to is simply because there is no downside to doing a gluten free trial, provided proper nutrition is maintained.”

Udi’s had a point: If avoiding gluten—a protein complex found in wheat and related grains—has all these potential health benefits, then why not steer clear of the stuff?

I decided to consult some experts. The doctors I polled all said gluten-related disorders are becoming more common—especially celiac disease, which causes the body to reject gluten instead of absorbing it, damaging the lining of the small intestine over time. Untreated, celiac may lead to pain, bloating, osteoporosis, certain cancers—and an increased risk of early death.

“Originally, I thought there was more celiac because we were better at finding it,” said Dr. Joseph Murray, a gastroenterologist and professor of medicine at the Mayo Clinic. But he was mistaken. For a 2009 study in the journal Gastroenterology, Murray’s research team compared blood samples collected from about 6,500 young men at a US Air Force base between 1948 and 1954 with a comparable number of modern-day samples. Today’s young men, they found, tested positive for celiac at four and a half times the rate of their forebears. What’s more, members of the older group with undiagnosed celiac disease were more likely to die in middle age than their non-celiac counterparts.

As for gluten sensitivity, which causes pain and bloating but not the small-intestine damage associated with celiac, there is no definitive test and therefore no solid way to document any increase in cases. The doctors I talked to, however, all say they’re seeing it more and more in their own practices.

But why? Humans have eaten wheat for thousands of years, so it seems odd that it would have begun to bother us only in the past few decades. So far, no one has explained this mystery, but there are a few theories. Some experts speculate that it’s changes in wheat itself—that the hybrid varieties we eat today contain more gluten than the stuff our ancestors ate. Yet we’ve been eating hybrid wheat for a half century. Another theory is the increasingly popular “hygiene hypothesis,” the notion that a lack of “good” bacteria in the developed world is causing our immune systems to go haywire and target formerly harmless proteins in nuts, grains, and other foods as dangerous invaders—a situation perhaps compounded by our overuse of antibiotics, which destroy intestinal flora.

The gastroenterologists were clear on one point: Whatever the cause of our declining ability to digest gluten, DIY dieting is not the solution. Dr. Daniel Leffler, the director of research at Beth Israel Deaconess Medical Center’s Celiac Center in Boston, finds Udi’s advice alarming. “I don’t feel comfortable making broad claims that eating gluten impairs energy levels,” he said. Avoiding gluten can actually be dangerous, Leffler added, since most people get the bulk of their necessary dietary fiber and certain vitamins from gluten-containing grains. Some gluten-free products are spiked with extra fiber, but subsisting on these specialty foods can get awfully pricey.

Murray cautioned that people who go gluten-free to ease stomach problems may end up masking the symptoms of underlying conditions such as Crohn’s disease, an immune disorder that affects the digestive tract. “You might feel better for a little while, but you wouldn’t know what’s really wrong with you,” he said.

Udi’s did not respond to my inquiries, but FDA spokeswoman Shelly Burgess told me in an email that the agency has no issue with the company’s claims, which “are talking about a diet or dietary pattern, not about attributes of a particular food.”

Although celiac is usually detectable via a simple blood test, diagnosing gluten sensitivity can require some dietary trial and error. Leffler and Murray recommend consulting a doctor before you try it. Rely on an overzealous chiropractor? Not so much.