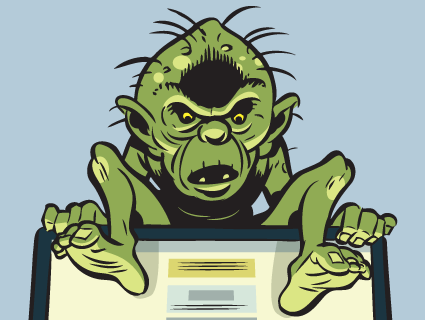 Everybody who’s written or blogged about climate change on a prominent website (or, even worse, spoken about it on YouTube) knows the drill. Shortly after you post, the menagerie of trolls arrives. They’re predominantly climate deniers, and they start in immediately arguing over the content and attacking the science—sometimes by slinging insults and even occasional obscenities. To cite a recent example:

What part of “we haven’t warmed any in 16 years” don’t you understand? Heh. “Cherry-picking” as defined by you alarmists: any time period selected containing data that refutes your hysterical hypothesis. Can be any length of time from 4 billion years to one hour. Fuck off, little man!?

It was reasonably obvious already that these folks were doing nothing good for the public’s understanding of the science of climate change (to say nothing of their own comprehension). But now there’s actual evidence to back this idea up.

In a recent study, a team of researchers from the George Mason University Center for Climate Change Communication and several other institutions employed a survey of 1,183 Americans to get at the negative consequences of vituperative online comments for the public understanding of science. Participants were asked to read a blog post containing a balanced discussion of the risks and benefits of nanotechnology (which is already all around us and supports a $91 billion US industry). The text of the post was the same for all participants, but the tone of the comments varied. Sometimes, they were “civil”—e.g., no name calling or flaming. But sometimes they were more like this: “If you don’t see the benefits of using nanotechnology in these products, you’re an idiot.”

The researchers were trying to find out what effect exposure to such rudeness had on public perceptions of nanotech risks. They found that it wasn’t a good one. Rather, it polarized the audience: Those who already thought nanorisks were low tended to become more sure of themselves when exposed to name-calling, while those who thought nanorisks are high were more likely to move in their own favored direction. In other words, it appeared that pushing people’s emotional buttons, through derogatory comments, made them double down on their preexisting beliefs.

Why are people so quick to buy junk theories on climate, creationism, and vaccines? Chris Mooney explains in “The Science of Why We Don’t Believe in Science.”

In the context of the psychological theory of motivated reasoning, this makes a great deal of sense. Based on pretty indisputable observations about how the brain works, the theory notes that people feel first, and think second. The emotions come faster than the “rational” thoughts—and also shape the retrieval of those thoughts from memory. Therefore, if reading insults activates one’s emotions, the “thinking” process may be more likely to be defensive in nature, and focused on preserving one’s identity and preexisting beliefs.

The study did not examine online climate change trolls directly—but there is good reason to think that the effects of their obnoxious behavior will, if anything, be worse. As the researchers note in the paper, compared with climate change, relatively few people know much about or have strong feelings about nanotechnology. When it comes to climate change, in contrast, “the controversy that you see in comments falls on more fertile ground, and resonates more with an established set of values that the reader may bring to the table,” explains study coauthor Dietram Scheufele, a professor of science communication at the University of Wisconsin-Madison. If commenters have stronger emotions and more of a stake, it stands to reason that the polarizing effect of their insults may be even stronger—although, to be sure, this needs to be studied.

The upshot of this research? This is not your father’s media environment any longer. In the golden oldie days of media, newspaper articles were consumed in the context of…other newspaper articles. But now, adds Scheufele, it’s like “reading the news article in the middle of the town square, with people screaming in my ear what I should believe about it.”

To be sure, we all retain the option of not reading the comments. Which, in light of the latest research, is looking smarter than ever.