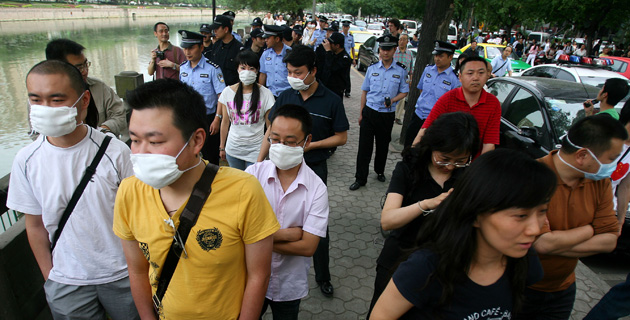 Policemen try to drive away citizens protesting against the construction of the polyethylene chemical factory in Chengdu in 2008.ZUMA/Color China Photos

China’s leaders made it clear this week that they want to put an end to the growing number of environmental protests flaring up across the country. On Monday, environment minister Zhou Shengxian announced that future industrial projects must include a “social-risk assessment” before they can launch, a plan Zhou hopes will reduce “the number of emergencies and mass incidents.” In other words, if you’re a local official who has plans to build a new power plant in your town, you’ll first have to predict how much it will piss off your citizens.

Many China observers see Zhou’s statement as a reaction to the increasingly large, frequent, and violent environmental protests staged by citizens ranging from upset farmers in rural villages to students and middle-class residents in major cities.

Most recently, citizens in the coastal city Ningbo reportedly gathered by the thousands over three days to protest the expansion of a petrochemical plant that produces paraxylene, a toxic ingredient used to make polyester (PDF). The plant is owned by Sinopec, one of China’s biggest oil and gas companies and the largest petroleum refiner in Asia. The Washington Post reported that some people grew violent after authorities opened tear gas and arrested protesters. Ningbo is hardly the first to see such protests; citizens in Xiamen, Dalian, and Shifang have staged similar demonstrations in recent years.

These protests, which the Chinese government calls “mass incidents,” show few signs of abating; in 2010 they numbered around 180,000 by one scholar’s estimate—four times the figure a decade earlier. Yang Zhaofei of the China Society of Environmental Sciences told the state-owned paper China Daily that public protests over the environment have been swelling by 29 percent annually. A protest in Wukan, Guangdong, late last year earned particular notoriety when some 4,000 villagers took to the streets to demonstrate against illegal land seizures and rigged local elections. The protests escalated after authorities allegedly tried to cover up the death of a demonstration organizer who was beaten by police.

This map by the New York Times highlights some of China’s most notable environmental protests over the last year. 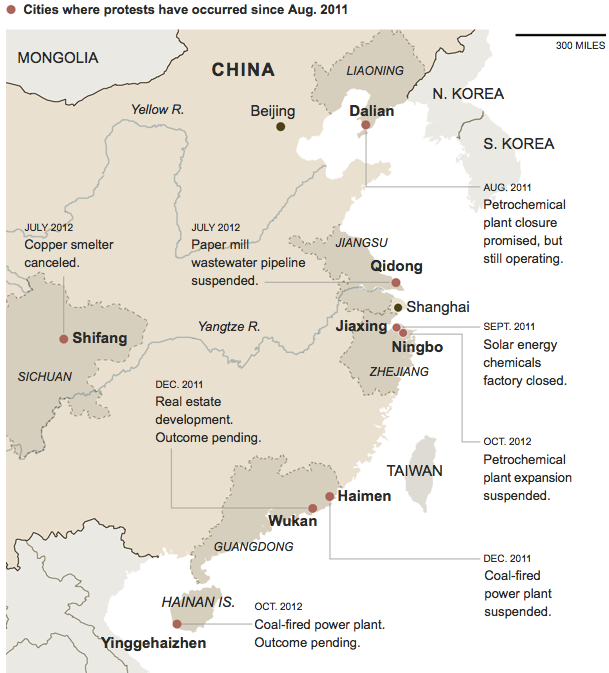 Zhou’s news conference took place alongside the ongoing Communist Party Congress, where for the first time in a decade China’s leaders, including President Hu Jintao, will hand over power to a new class of successors. “We are now in a sensitive period especially in terms of environmental issues,” Zhou said, while stressing the need for governments to “disclose all the information related to environmental assessment, including the promises made by local government officials.”

In part, Zhou’s remarks are an expression of the frustration among many environmental officials whose opinions are often outweighed by those investors and politicians with stakes in industrial projects, says Ma Jun, one of China’s foremost environmental advocates who runs the pollution monitoring group Institute of Public and Environmental Affairs. “The environmental agencies feel they have been put under too much pressure, beyond the authority they’ve got,” Ma told the New York Times.

“Mass incidents” in China number around 180,000—four times the figure a decade earlier.

Although Zhou’s plan might demonstrate political will from the Communist Party leadership to make decision-making around industrial projects more transparent, it’s doubtful the plan will do much to heed the demands of protesters, some China observers say.

Instead, chances are the new “social-risk” plan may result in more proactive and sophisticated suppression tactics, says Phelim Kine, the Asia division deputy director at Human Rights Watch. We may begin to see more industrial projects relocate to poorer areas of the country where local populations are likely to be more acommodating of industries because of the promise of jobs, Kine adds. We may also see the targeting of potential opinion leaders, civil society activists, and environmentalists with “a staged bribe/bully/bludgeon approach designed to snuff out potential sources of protest before it can occur.”

The Chinese government already employs censorship tactics to prevent news of protests from spreading. Shortly after demonstrations broke out in Ningbo last month, the Central Propaganda Department issued this directive to media and internet companies: “Do not report or comment on the PX project in Zhenhai, Ningbo spurring groups to seek audience with officials or related issues.”

We may see the targeting of activists with “a staged bribe/bully/bludgeon approach designed to snuff out potential sources of protest.”

On the up side, Qian Jingjing, the China program director at the Natural Resources Defense Council, says that requiring social-risk assessments is “a step in the right direction.” She explained that since August China’s National Development and Reform Commission—main economic planning agency which oversees industrial projects—started requiring social-risk assessments before approving certain projects. Qian concedes that it’s unclear how effectively social-risk assessments will respond to the views of local citizens, and that they’ll need to include measures such as public notices, public hearings, site visits, and questionnaires to assess public opinion toward a project.

Another open question is whether the new social-risk assessment requirement will successfully reduce the number of protests in the absence of fundamental reforms to the legal system and political freedom. Whether what they seek is damage compensation, the relocation of a power plant, or the removal of a corrupt official, public protests in China often take place after citizens have tried—and failed—to seek justice through petitioning or by going to court.

“The why of these protests is no mystery: the lack of the rule of law, transparency, and official accountability,” Economy wrote at The Atlantic last year. “In the Wukan case, the villagers are protesting corruption in both land sales and the electoral process. Whether the protests are over these issues or the environment or defective products, the root cause is the same.”

*Full disclosure: Between 2007 and 2010, I worked for Elizabeth Economy as a research associate at the Council on Foreign Relations.