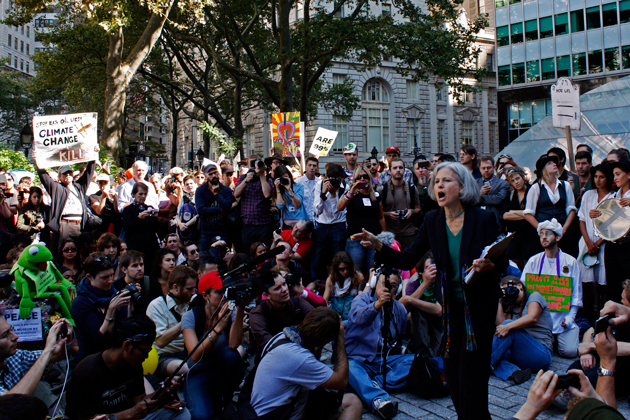 Here’s one thing Barack Obama and Mitt Romney have in common: They don’t have to battle for attention with a squad of dancing jellyfish puppets. Jill Stein did, and won. The Green Party presidential candidate spent yesterday morning in Manhattan’s Financial District with the environmental contingent of Occupy Wall Street, dodging cops, patiently waiting out street theater performances, and shouting hoarsely into the People’s Mic.

“Wall Street has put our climate in crisis,” Stein yelled, to an ample wiggling of spirit fingers. “It’s up to us to lead the way on the economy and the climate.”

Occupy Wall Street has long eschewed party politics, which makes the appearance of this long-shot presidential contender slightly discordant. But to see Stein, for whom environmental issues are a campaign centerpiece, marks an apex in what Occupy’s environmental organizers call a yearlong struggle to bring climate change to the forefront of the movement.

Stein, 62, is a Harvard-educated physician who first entered politics ten years ago as a Green-Rainbow Party candidate for Massachusetts governor, after years of public health activism. Despite her greatest electoral success being a seat on the Lexington, Mass., Town Meeting in 2005 and 2008, Stein will go head to head with Obama and Romney in at least 38 states this November, making her a contender for the votes of environmentally conscious Occupiers nationwide who are dissatisfied with both mainstream parties’ mollifying of the fossil fuel industry.

Stein isn’t naïve about her chances for the White House. But she’s running anyway, because in her mind both parties are tarred by the same brush.

“Without our voices there is no public interest, it’s just corporate spin campaigns competing with each other for more corporate dollars.”

The environment hasn’t always been a top concern in the Occupy movement. In the earliest days in Zuccotti Park, sustainability discussion groups cropped up here and there, and the green-minded managed to get a few bicycle-powered generators in operation. Climate change would come up and get dropped. In a sea of distractions ranging from overhauling finance regulations to avoiding imminent arrest, it took months for climate change to register as a prominent issue, according to Occupy organizer Rebecca Manski, who dropped out of the world of environmental non-profits to move to New York in the first days of the occupation.

“For some reason, people still don’t see the connection between environmental and economic justice,” she said in a phone interview with Climate Desk last week. “But gradually we’re seeing that we’re being heard.”

“This machine that is driving our economy and our climate over the cliff is bought and paid for by Wall Street.”

That connection was the backbone of Stein’s speech, and is also a central tenet of her campaign. “This machine that is driving our economy and our climate over the cliff is bought and paid for by Wall Street,” she said in a one-on-one chat an hour before her speech, flipping through a fat clipboard of notes and smoothing a dark blue pantsuit. “It’s wonderful that people are connecting the dots here, to say we have a crisis with the economy, a crisis with the climate, we have to fix them both by standing up to Wall Street, by breaking down the big banks.”

Unsurprisingly, the environmentalists of Occupy have not come out with “official” stances on specific Obama administration policies. But they’re far from toothless: Cathy Duval, political director of the Sierra Club, said that over the last year Occupy has become an important partner for mainstream environmental groups. The movement’s particular talent for turning out large groups of enthusiastic, outraged people has also been a boon. Occupiers showed up to protest the Keystone XL pipeline in front of the White House in November, rallied against fracking in Pennsylvania and New York, and last week got arrested for blocking construction of a pipeline that will carry natural gas from fracked wells into Manhattan. And Phil Areneau, a regional organizer for 350.org, said the movement’s far-reaching social networks have proved an effective mechanism for disseminating climate change talking points.

“I think it’s healthy to have some movements that focus on politics, and some that don’t,” Duval said. “One of [Occupy’s] strengths is that they don’t engage with traditional players.”

After her speech, Stein’s slight frame and poof of grey hair dissolved into the crowd that had gathered for “Storm Wall Street,” an event staged on Occupy’s one-year anniversary dedicated specifically to climate change. People in polar bear costumes rubbed shoulders with anarchists in black hoodies, while anti-fracking activists carried signs and shouted slogans as if they’d just been bused in from Albany.

A tall blonde polar bear named Monica Hunken expressed optimism that climate change will keep gaining as an important issue in Occupy. Responding to arrests, evictions, bank divestments, and other pressing daily issues often keeps the movement “in a state of reactivity,” she said. As the short-term impacts of global warming become more apparent, expect more action from the Occupiers: “What we’ll see is the urgency of climate change, of sea level rise knocking at the door.”