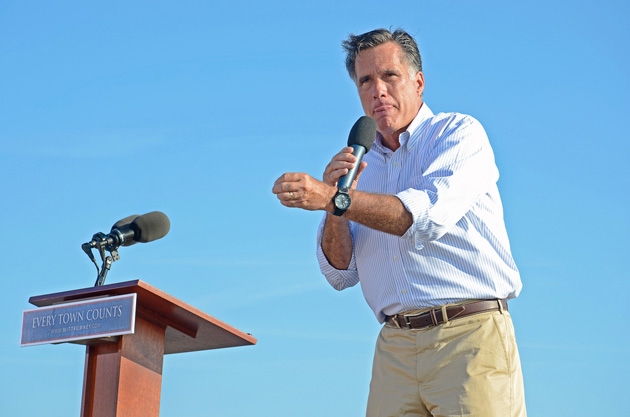 This story first appeared on Slate and is reproduced here as part of the Climate Desk collaboration.

And these folks aren’t just in D.C. for decoration. A few years ago, Obama issued a memorandum to all heads of executive departments and agencies on the subject of scientific integrity. It began:

Science and the scientific process must inform and guide decisions of my Administration on a wide range of issues, including improvement of public health, protection of the environment, increased efficiency in the use of energy and other resources, mitigation of the threat of climate change, and protection of national security.

With that dream team in his corner, and with his powerful belief in the scientific method, you’d think Obama would have an overwhelming advantage over Mitt Romney in a debate of the top American science questions. You’d be wrong.

On Tuesday, the candidates submitted answers to the 14 “most important science policy questions facing the United States.” The Q-and-A session was organized by Science Debate, a grassroots, nonpartisan, do-gooder group that has been trying since 2008 to get the presidential candidates to engage in a live debate about science and science policy. Subjecting politicians to a science debate might sound like a cruel pop quiz, but it isn’t meant to be. As Science Debate explains:

According to Science Debate, both the Obama and Romney campaigns say they are considering participating in a live science forum. In the meantime, these written answers will have to do. If you scroll through them quickly, one thing is immediately apparent: Mitt Romney’s team took this very seriously. His answers are longer, they have subtitles, they have bullet points. It’s not just great presentation: The Romney text is substantive, specific, and detailed. Obama’s answers to some of the same questions are single paragraphs that are vague, repetitive (two in a row start with “Since taking office”), and poorly written.

Question No. 4 is about pandemics: Recent experiments show how avian flu may become transmissible among mammals. In an era of constant and rapid international travel, what steps should the United States take to protect our population from emerging diseases, global pandemics and/or deliberate biological attacks?

This question is an invitation to show strong leadership, expertise, creativity, and a sense of urgency. Obama’s answer starts like this: “We all are aware that the world is becoming smaller every day.”

Romney nailed it. An excerpt of his answer: “To further improve preparedness, we must continue to invest in the best public health monitoring systems that can be built. I will also encourage advancements in research and manufacturing to increase scientific understanding of new pathogens and improve response time when they emerge. The development of new countermeasures, from diagnostics to antibiotics and antivirals to respirators, will help protect human lives in the face of new bugs and superbugs.”

If you look more closely at Romney’s answers, though, it’s clear that some of his policy proposals are either not informed by science or directly contradict the scientific evidence. He starts out strong while answering Question No. 2, about climate change: “I am not a scientist myself, but my best assessment of the data is that the world is getting warmer, that human activity contributes to that warming, and that policymakers should therefore consider the risk of negative consequences.” Yes! He gets it! Maybe he’s even atoning for his pick of Paul Ryan. We can all stop debating a question that has been settled scientifically for years and move on to an honest discussion of how to deal with the problem of global warming.

But then Romney goes on. “However, there remains a lack of scientific consensus on the issue—on the extent of the warming, the extent of the human contribution, and the severity of the risk—and I believe we must support continued debate and investigation within the scientific community.” Sure, scientists are continuing to refine their understanding of climate change—they’re stubborn like that, always trying to improve their models—but there’s no true debate on the extent of the human contribution (if it weren’t for the human contribution, the climate would likely be cooling) and the question of severity of risk isn’t between “a smidge of risk” and “something we should probably pay attention to.” It’s between “really bad” and “difficult to imagine just how really bad.”

And Obama clearly wins Question No. 8, about fresh water. His answer emphasizes the importance of water for health, recreation, and international relations, and he names and enumerates specific conservation and distribution plans.

Romney’s answer to the same question sounds promising at first: “America has made extraordinary environmental progress in recent decades thanks to the laws that protect our air and water. But while these laws have served us well, they have not been modernized in over 20 years and are now significantly out of date.” One might think, just for a moment and against all evidence, that the Republican candidate for president realizes that the Clean Water Act was one of the greatest accomplishments of legislative history and should be updated to reflect the latest science and make it even more effective. But again he goes on: “Our communities and businesses must contend with excessively costly and inflexible approaches that impose unnecessary economic constraints and trigger inevitable litigation.”

Sigh. Mitt, take a break from the campaign for an afternoon and go kayaking on the Potomac River. In your lifetime, it has gone from a filthy, acidic drainage ditch for coal mine tailings to a thriving, cleaner-all-the-time waterway teeming with fish and birds.

It’s clear from Romney’s answers that his top priorities are reducing government and promoting business, and that science is fine as long as it doesn’t interfere with those ends. But what is impressive and kind of surprising about the science debate is how much thought and effort the Romney campaign put into responding to these questions. It’s not clear how many votes he could pick up with his answers: Scientists and science enthusiasts don’t make up a big chunk of the electorate, and they tend be Democrats. But Obama’s campaign team shouldn’t take them for granted.

And maybe by the next presidential election, we’ll get to see the candidates debating science policy not in writing but on stage.