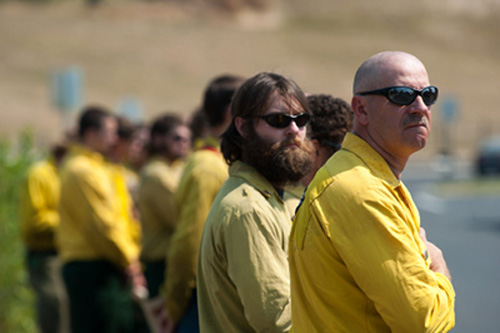 Firefighters attend the funeral of Anne Veseth, the 12th person killed while fighting wildfires around the country this year.Photo: Michael Kodas

This story was originally published online by OnEarth magazine. Read more about wildfires and climate at OnEarth.org.

Earlier this month, a 20-year-old digging a fireline in the Idaho mountains was killed by a falling tree, making her the 12th person to die in forest firefighting operations around the country this year. When I attended her funeral a few days later, nearly 300 of her fellow US Forest Service firefighters lined up outside the Moscow, Idaho, Church of the Nazarene in their flame-retardant work gear—shirts the color of sunflowers tucked into rugged, jade-green pants—and watched bagpipers and an honor guard lead the family of Anne Veseth into the sanctuary.

I served as a wildland firefighter during the 2003 season and have spent a lot of time around Forest Service crews while writing a book about megafires, so I’m used to seeing firefighters’ eyes tearing from smoke and sweat. But I’ve never seen so many of their stony faces weeping, and I’ve never witnessed as much outrage among them as Veseth’s death has prompted.

That’s because the day before she was killed, a 20-person crew of highly trained “hotshots”—the Forest Service’s equivalent of the Navy SEALS—arrived at the Steep Corner fire where Veseth died but refused to take part in the firefighting operation. They deemed it “extremely unsafe,” according to a report they later filed explaining their decision. Chief among the crew’s concerns were the number of dead and fire-weakened trees—known as “snags”—that were falling around firefighters. One of those snags knocked over the tree that killed Veseth.

In a fire season driven by heat and drought that has already proven among the most destructive in US history, Veseth’s death highlights both the human costs of firefighting and a raging debate about the proper policy for managing wildfire in a warming world. With the Forest Service’s $948 million firefighting budget for 2012 nearly exhausted, but months to go in a fire season projected to cost as much as $1.4 billion, the agency—in a major reversal of a federal policy adopted in 1995—is quickly responding to almost every blaze in an attempt to keep small fires from raging out of control. That’s despite the long-term harm to forest ecosystems and the likelihood that the new policy could prime forests for even more destructive fires in the future. (See OnEarth‘s previous coverage of this controversial shift in firefighting policy.)

There’s also a potential human cost to the more aggressive stance: Most fireline deaths occur in the early phases of firefighting operations, when small teams or individuals may take on blazes without adequate management, communication, or knowledge of the terrain and weather. “Initial attacks” are often made up of a variety of local, state, and federal firefighters, who can prove difficult to coordinate and may have differing approaches to even the most basic firefighting operations. The hotshots’ report on the fire that killed Veseth describes just such a situation. Posted on SAFENET, which allows Forest Service employees to anonymously report safety concerns, the report claims that the Steep Corner operation was in violation of 8 of the 10 Standard Firefighting Orders—the basic safety rules for federal wildland firefighters.

When the hotshots arrived, the firefighting operation was being overseen by the Clearwater-Potlatch Timber Protection Association, a private, nonprofit organization chartered by the Idaho Department of Lands to fight fires on private lands, most of it controlled by logging companies. The fire was burning in standing timber and debris left from timber harvests. The report by the Flathead Hotshots crew, which is based in Montana, alleges a number of safety concerns, including:

Firefighting experts say the specific problems alleged by the hotshots at the Steep Corner fire are indicative of what happens when firefighting resources and expertise are stretched thin, as they have been by this year’s destructive fire season and the Forest Service’s “aggressive initial attack” mandate.

That policy shift “is putting firefighters at greater risk, and it’s increasing the cost,” said Bob Mutch, who spent 38 years in the Forest Service and is now a wildfire consultant. “We rush people in without all the support.”

Andy Stahl, executive director of the nonprofit forestry watchdog group Forest Service Employees for Environmental Ethics, points out that firefighters are often at the greatest risk when they’re racing to and flying over wildfires. Indeed, six of this year’s firefighting fatalities were caused by plane crashes. “Anytime a firefighter climbs into an airplane, his or her chance of dying goes up tenfold,” Stahl said.

Several agencies are now investigating conditions at the Steep Corner fire, including the federal Occupational Safety and Health Administration, the Idaho Lands Board (which oversees state lands), and the Forest Service’s law enforcement division. Leaders of the Clearwater-Potlatch Timber Protection Association and the Nez-Perce Clearwater National Forest have said that the problems identified by the hotshots were corrected before the accident.

Through a spokesperson, Veseth’s family members said they are reserving judgment on the circumstances of her death until the investigations are complete. The family is devoted to public service and firefighting. Veseth’s mother is a nurse, her oldest sister is a paramedic, and her brother is a seven-year veteran forest firefighter. In 2010, Veseth asked her brother to help her get a job; last year she joined the fire crew in the North Fork Ranger District of the Clearwater National Forest, just a couple hours drive from her home. She eagerly signed on with teams sent to fight wildfires in Colorado and Arizona earlier this year. When she arrived at the Steep Corner fire, Veseth was 10 days away from starting another degree program at Lewis Clark State College, where she had previously studied auto mechanics. Her family told the Associated Press she wanted to focus on forestry or fire ecology.

Outside the church, after the bagpipes and bells, Veseth’s family walked through two rows of firefighters, climbed into her brother’s forest firefighting truck, and slowly drove away. Firefighters lined the road, then climbed into their trucks to join a short procession.

But they couldn’t stay long. With 95-degree temperatures bringing scores of blazes to Idaho, Washington, and California, they were needed back on the firelines.