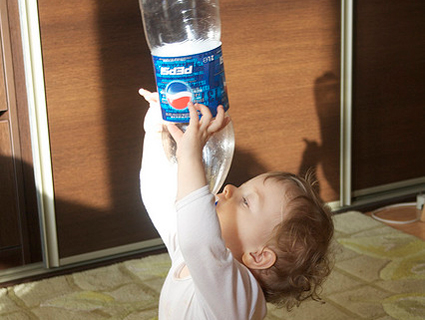 Update (9/13/12): The New York City Board of Health approved Bloomberg’s ban on the sale of sugary drinks larger than 16 ounces in places like restaurants and movie theaters. The measure will take effect in six months.

Talking pop is all the rage right now. Scarcely a day goes by without mention of the state of tyranny that will arise if New York City Mayor Michael Bloomberg succeeds in restricting the size of sodas sold in some venues in the city (the New York Board of Health gave preliminary approval to the measure on Tuesday). The latest New Yorker cover portrays a couple cowering over a massive cup of a sweetened drink, trying to shelter it from the view of a passing authority. Catalyzed by the sneers of Jon Stewart and polling that suggests a majority of Americans would rather make their own call on soda portions, the hip response to all this seems to be weighted towards “keep the government outta my Coke” libertarianism.

Another option may provide hope to those who see obesity as a national disaster, but who think regulating sizes of sugary drinks sold will either prove ineffective or backfire. The idea of a “soda tax”—a tax per beverage or per ounce of drinks with added sugar—isn’t new, and in 2009, 33 states levied taxes (PDF) on sodas at an average rate of 5.2 percent.

Now, some municipalities like Richmond, California, are muscling up and proposing more aggressive taxation–high enough, economists and physicians say, to actually have a chance at changing behavior. More than a third of American adults are now obese, and as University of California-San Francisco professor and endocrinologist Robert Lustig points out, even more are suffering from metabolic syndrome, often linked to the over consumption of sugar. Seeing as obesity accounts for an estimated 21 percent of our country’s medical costs, and diseases related to metabolic syndrome to as much as 75 percent of our health care spending, some government intervention might be due. Here are some reasons why taxing soda is a good idea:

People are getting scary amounts of calories from drinking sweetened beverages. It’s not just that children and adults are increasingly obese; the excessive slurping of the sugar in soda, Snapple, Gatorade, and the like has risen in tandem. A 2011 UC-Berkeley paper points to the finding that liquid sugar accounts for almost half the total added sugar intake (PDF) in the US population, and soft drinks contribute more energy to the diet than any other single type of food or beverage. A National Health and Nutrition Survey in the early aughts found the average American (PDF) consumed 22.5 teaspoons (360 calories) of added sugar a day; for a 2,400 calories-a-day diet, that about exhausts the amount of sugar total that’s recommended; the National Heart Association recommends just five teaspoons of added sugar for women and nine teaspoons for men.

Sweetened drinks are also among the least expensive sources of energy. That means that poor people, who are also at the highest risk for obesity and type-2 diabetes, are also the most likely to grab cheaper drinks from 7-Eleven.

And take a step back here: Soda is not food. We don’t need it to survive, and our government pays for a free alternative—water. “That was the aha! moment for me,” says Diane Dickstein, a former public policy lawyer active in the campaign to support the Richmond penny-per-ounce tax. “There are alternatives, and no one is saying you can’t drink it.”

Sugar could be addictive. In commentary published in Nature (PDF) in February, Lustig and two researchers make the claim that sugar meets the same four criteria as alcohol in terms of why it should be regulated—it’s pervasive, toxic, has the potential for abuse, and makes a negative impact on society. This potential for abuse theory stood out to me; could my own sweet tooth be indicative not just of an innate love for the taste of sweetness, but instead of certain hormones being suppressed that should be telling me to stop eating?

Lustig points to studies that suggest that sugar has dependence-producing properties; the substance hinders ghrelin, which tells your brain whether you are still hungry; the hormone leptin, which tells you when to be full; and may reduce dopamine messaging, meaning you might get less pleasure from food and want to consume more.

An even scarier question: Could we be evolving to want sugar as a result of so much intake? “That is a very interesting and hot topic,” Lustig told me, “but unfortunately there is virtually no data to tell us.” Lustig did point to some research done on rats that suggests that the earlier rats are exposed to sugar, the more they’ll crave it later.

Read my earlier blog post on Lustig’s theory for more about the link between sugar and addiction.

A big enough tax could change behavior. When the USDA crunched the numbers (PDF) on a 20 percent increase in cost of sugared beverages in 2010 study, it found that more expensive drinks could spur an average loss of 3.8 pounds a year for adults and 4.5 pounds a year for kids.

The American Beverage Association and others have fiercely opposed this type of taxation because they think it could be detrimental to businesses, jobs, and the economy. “Sugar-sweetened beverages are only a small percent of the average diet,” says Chris Gindlesperger of the American Beverage Association. “Why are researchers and others trying to assign 100 percent of the blame to a single product? It unfairly puts the burden on the backs of the workers.”

I had Syon Bhanot, a doctoral student specializing in behavioral economics, break down the basic economic arguments behind “sin taxes”: “There are behaviors that people consistently undertake that are damaging to their health. Because you are causing harm to yourself, you are arguably causing harm to the society you live in, but also the people who may have to pay the bills if you’re on any government programs.”

But how much tax is needed to change behavior? Some research shows that smaller soda taxes—like around a 5 percent sales tax on soda—have had little impact on weight in adolescents. In a 2009 paper, Dr. Kelly Brownell, head of Yale University’s Rudd Center for Food Policy and Obesity, and colleagues called for an excise tax of 1 cent per ounce on beverages that have any caloric sweetener. This spring, Richmond proposed a measure that will tax businesses 1 penny per ounce of sugared beverages—like soda, sports drinks, and iced teas—sold, but the tax won’t apply to juice and milk. If the retailer taxed passes along the fee to the consumer, as legislators hope, the consumer might respond by buying fewer drinks with added sweetener.

Whether this can have any affect on consumer habits relates in part to a product’s “price elasticity”—how much less people will buy if the price is raised by a certain amount. Lisa Powell, a senior research scientist in health policy at the University of Illinois-Chicago, explained that the price elasticity of soda generally has been thought to be about -.8, meaning if you raise the price of soft drinks 10 percent, consumption would go down about 8 percent. “More recent evidence has shown that soda might be even more sensitive,” Powell says, and have an elasticity of -1.2. The 10 percent increase in price could then reduce consumption by 12 percent.

The penny-per-ounce tax raises the price of sugar sweetened beverages by 20 percent—meaning consumption could fall 24 percent.

And on average, the penny-per-ounce tax raises the price of sugar sweetened beverages by 20 percent. Meaning consumption could fall 24 percent—a substantial change in habits.

Powell, whose research has included analyzing the effect of such taxes on employment, argues that it’s likely consumers will spend their dollars on alternative beverages or products. Though she couldn’t tell me the full results of a study she just wrapped up on the subject, she would say that a soda tax “shouldn’t make a difference in terms of net demand” and that “one would expect there would be no reduction in jobs.”

Revenues raised through taxation could pay for health education and medical costs. As a result of the costs incurred treating obesity and diseases like heart disease, Lustig says, “we’re chewing through money for medical care so fast, Medicare will be broke by 2024.”

In Richmond, where voters decide if the municipality will become the first to tax sugary drinks per ounce, 52 percent of kids are overweight or obese, and 58 percents of adults are. The city estimates that 11 percent of its deaths arise from obesity.

The nice thing about taxing sugared beverages instead of regulating portion sizes is that taxes raise revenue. Richmond’s director of finance predicts the proposed fee on business could generate from $4-$8 million; cardiologist and Richmond city councilman Jeff Ritterman, who proposed the city’s penny-per-ounce measure, thinks $3 million is more realistic. The money would be put into a general fund and could address the city’s health problems by being funneled towards different initiatives. Among those talked about? “Increasing after-school sports programs and making them less expensive,” Ritterman says, “improving school-based nutrition classes along with the urban agriculture community, and helping with the health care costs of diabetic children.”

Just talking about a tax could spark change. Could awareness about the reason for taxing soda in the first place nudge some consumers to think more about how much sweetener they’re inhaling? “Humans are myopic,” Bhanot says. “Making soda consumers pay more is an economic mechanism to combat their natural tendency to be shortsighted.”

Lustig agrees with this rationale: “It shines light on the issue, so people can determine for themselves whether this is a public health problem or not.”

“What if the government had said: AIDS, we don’t care about, TB, we don’t care. Where would we be?” he continues. “Public health matters. Exposures cause problems in public health…There’s no single piece of legislation that’s going to solve the problem, but this would be a smart beginning.”