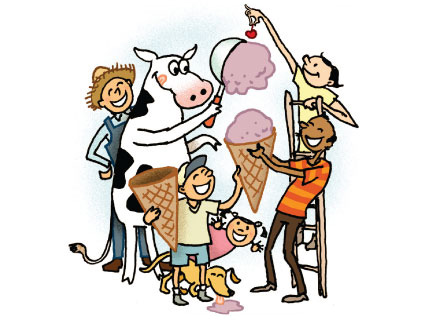 Every other Saturday in the winter, I head out to a bustling local-food bazaar, the pickup site of the multi-farm CSA I help run in North Carolina’s Appalachian Mountains. A few weeks ago, I watched customers marvel over the spread: bok choy, kale, potatoes, Jerusalem artichokes, garlic, free-range eggs, pasture-raised meat, freshly baked bread, and more. The rest of Appalachia, where the economy still sucks, seemed a world away. I couldn’t help but wonder if the answer to at least some of our jobs woes didn’t lie right in front of me.

Every year, Americans spend almost $1.2 trillion on food, equal to nearly a tenth of total US GDP. In most communities, the great bulk of that goes to fast-food chains and retail giants like Walmart—and doesn’t do much for locals. As Minnesota-based economist Ken Meter puts it, “Our food system is extractive, sort of like mining.”

Indeed. A series of case studies by the consultancy Civic Economics shows that for every dollar we spend at a large chain, about 15 cents stays in the area, while locally owned enterprises trap 30 to 45 cents. Locally owned food companies are often on the upper end of that range. That’s because they tend to source their products from the area—unlike, say, local bookstores or boutiques, which generally buy their inventory from far away.

The good news is that local food businesses have blossomed over the past two decades. Between 1992 and 2007, sales of farm goods sold directly to consumers through channels like farmers markets jumped 77 percent to $1.2 billion, a 2011 USDA study shows. And total local food sales—to consumers, but also through grocery stores and restaurants—reached an estimated $4.8 billion in 2008.

Still, we’re only scratching the surface of local food’s potential. That $4.8 billion? It amounts to just 1.9 percent of total US farm sales. The other 98 percent is mostly Big Ag. So what’s holding us back? I know the answer from hard experience: Because of consolidation by the agribiz giants in recent years, small farms like ours are usually hours away from the nearest packinghouse, cold storage, dairy-processing facility, cannery, and the like. At our farm, for example, we’d consider raising animals for meat if we didn’t have to haul them 50 miles to the slaughterhouse—what with the price of gas and the time we’d lose in the commute, it just doesn’t make economic sense.

But these problems are not insurmountable—if you’re willing to collaborate. When small food businesses find creative ways to work together, they build even more wealth within their communities. Meter pointed me to Snowville Creamery, a small dairy processor in rural Ohio that sells fresh milk, cream, and yogurt throughout Ohio and neighboring states. The company buys and processes milk from surrounding pasture-based dairy farms.

When you sell reduced-fat retail milk, you generate lots of cream—and Snowville was having trouble finding a market for all of it. While Snowville’s owners pondered what to do with their glut, a boutique ice cream maker in Columbus, called Jeni’s Splendid Ice Creams, was looking for a high-quality cream. A partnership was born: Since 2010, Snowville has supplied Jeni’s with cream and skim milk for a delicious ice cream base. So now, when Columbus residents buy a pint of Jeni’s, they’re supporting jobs at a food retailer, an ice cream maker, a dairy processor, and a dairy farm, all in one go.

The teamwork model isn’t just for ice-cream-obsessed foodies. Back in 2006 a group of farmers in northeast Iowa noted that the region was producing plenty of soybeans and corn for livestock feed, but very little food for locals. So they lured farmers into devoting tiny patches of their land to growing fresh produce and expanded farmers markets where they could sell it. As a result, the USDA reports, local food sales in the area grew from less than $10,000 in 2006 to more than $2 million by 2010—creating an estimated 26 new jobs and drawing in 21 farms to sell produce directly to schools.

And then there’s our farm. We’ve teamed up with other growers to make our bustling Saturday winter bazaar happen. Rather than each farm figuring out how to grow greens in the freezing cold, we all worked together to find grants that helped us build passive-solar greenhouses. And instead of hawking our beautiful bok choy at each of our far-flung farms, we found that we draw a bigger crowd when we’re all in one place. The model has worked so well that we’re recruiting other folks to join our team: Most recently we’ve partnered up with the county health department to offer CSA discounts—and cooking classes!—to teen parents and people who use the local free health care clinic. Are our little collaborations the silver bullet for Appalachia’s flagging economy? Not quite. But they’re a start.