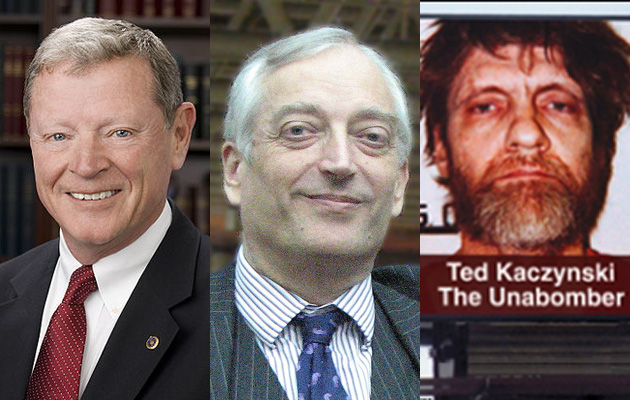 It’s been a tough few weeks for the forces of climate change denial.

First came the giant billboard with Unabomber Ted Kacynzki’s face plastered across it: “I Still Believe in Global Warming. Do You?” Sponsored by the Heartland Institute, the nerve center of climate change denial, it was supposed to draw attention to the fact that “the most prominent advocates of global warming aren’t scientists. They are murderers, tyrants, and madmen.” Instead it drew attention to the fact that these guys had overreached, and with predictable consequences.

A hard-hitting campaign from a new group called Forecast the Facts persuaded many of the corporations backing Heartland to withdraw $825,000 in funding; an entire wing of the institute, devoted to helping the insurance industry, calved off to form its own nonprofit. Normally friendly politicians like Wisconsin Republican Rep. Jim Sensenbrenner announced that they would boycott the group’s annual conference unless the billboard campaign was ended.

Read Kate Sheppard on the smear behind Climategate.

Which it was, before the billboards with Charles Manson and Osama bin Laden could be unveiled, but not before the damage was done: Sensenbrenner spoke at last month’s conclave, but attendance was way down at the annual gathering, and Heartland leaders announced that there were no plans for another of the yearly fests. Heartland’s head, Joe Bast, complained that his side had been subjected to the most “uncivil name-calling and disparagement you can possibly imagine from climate alarmists,” which was both a little rich—after all, he was the guy with the mass-murderer billboards—but also a little pathetic. A whimper had replaced the characteristically confident snarl of the American right.

That pugnaciousness may return: Mr. Bast said last week that he was finding new corporate sponsors, that he was building a new small-donor base that was “Greenpeace-proof,” and that in any event the billboard had been a fine idea anyway because it had “generated more than $5 million in earned media so far.” (That’s a bit like saying that for a successful White House bid John Edwards should have had more mistresses and babies because look at all the publicity!) Whatever the final outcome, it’s worth noting that, in a larger sense, Bast is correct: This tiny collection of deniers has actually been incredibly effective over the past years.

The best of them—and that would be Marc Morano, proprietor of the website Climate Depot, and Anthony Watts, of the website Watts Up With That—have fought with remarkable tenacity to stall and delay the inevitable recognition that we’re in serious trouble. They’ve never had much to work with. Only one even remotely serious scientist remains in the denialist camp. That’s MIT’s Richard Lindzen, who has been arguing for years that while global warming is real it won’t be as severe as almost all his colleagues believe. But as a long article in the New York Times detailed last month, the credibility of that sole dissenter is basically shot. Even the peer reviewers he approved for his last paper told the National Academy of Sciences that it didn’t merit publication. (It ended up in a “little-known Korean journal.”)

Deprived of actual publishing scientists to work with, they’ve relied on a small troupe of vaudeville performers, featuring them endlessly on their websites. Lord Christopher Monckton, for instance, an English peer (who has been officially warned by the House of Lords to stop saying he’s a member) began his speech at Heartland’s annual conference by boasting that he had “no scientific qualification” to challenge the science of climate change.

He’s proved the truth of that claim many times, beginning in his pre-climate-change career when he explained to readers of the American Spectator that “there is only one way to stop AIDS. That is to screen the entire population regularly and to quarantine all carriers of the disease for life.” His personal contribution to the genre of climate change mass-murderer analogies has been to explain that a group of young climate change activists who tried to take over a stage where he was speaking were “Hitler Youth.”

Or consider Lubos Motl, a Czech theoretical physicist who has never published on climate change but nonetheless keeps up a steady stream of web assaults on scientists he calls “fringe kibitzers who want to become universal dictators” who should “be thinking how to undo your inexcusable behavior so that you will spend as little time in prison as possible.” On the crazed killer front, Motl said that, while he supported many of Norwegian gunman Anders Breivik’s ideas, it was hard to justify gunning down all those children—still, it did demonstrate that “right-wing people…may even be more efficient while killing—and the probable reason is that Breivik may have a higher IQ than your garden variety left-wing or Islamic terrorist.”

If your urge is to laugh at this kind of clown show, the joke’s on you—because it’s worked. I mean, James Inhofe, the Oklahoma Republican who has emerged victorious in every Senate fight on climate change, cites Motl regularly; Monckton has testified four times before the US Congress.

Morano, one of the most skilled political operatives of the age—he “broke the story” that became the Swift Boat attack on John Kerry—plays rough: He regularly publishes the email addresses of those he pillories, for instance, so his readers can pile on the abuse. But he plays smart, too. He’s a favorite of Fox News and of Rush Limbaugh, and he and his colleagues have used those platforms to make it anathema for any Republican politician to publicly express a belief in the reality of climate change.

Take Newt Gingrich, for instance. Only four years ago he was willing to sit on a love seat with Nancy Pelosi and film a commercial for a campaign headed by Al Gore. In it he explained that he agreed with the California congresswoman and then-speaker of the House that the time had come for action on climate. This fall, hounded by Morano, he was forced to recant again and again. His dalliance with the truth about carbon dioxide hurt him more among the Republican faithful than any other single “failing.” Even Mitt Romney, who as governor of Massachusetts actually took some action on global warming, has now been reduced to claiming that scientists may tell us “in 50 years” if we have anything to fear.

In other words, a small cadre of fervent climate change deniers took control of the Republican party on the issue. This, in turn, has meant control of Congress, and since the president can’t sign a treaty by himself, it’s effectively meant stifling any significant international progress on global warming. Put another way, the various right-wing billionaires and energy companies who have bankrolled this stuff have gotten their money’s worth many times over.

One reason the denialists’ campaign has been so successful, of course, is that they’ve also managed to intimidate the other side. There aren’t many senators who rise with the passion or frequency of Inhofe but to warn of the dangers of ignoring what’s really happening on our embattled planet.

It’s a striking barometer of intimidation that Barack Obama, who has a clear enough understanding of climate change and its dangers, has barely mentioned the subject for four years. He did show a little leg to his liberal base in Rolling Stone earlier this spring by hinting that climate change could become a campaign issue. Last week, however, he passed on his best chance to make good on that promise when he gave a long speech on energy at an Iowa wind turbine factory without even mentioning global warming. Because the GOP has been so unreasonable, the president clearly feels he can take the environmental vote by staying silent, which means the odds that he’ll do anything dramatic in the next four years grow steadily smaller.

On the brighter side, not everyone has been intimidated. In fact, a spirited countermovement has arisen in recent years. The very same weekend that Heartland tried to put the Unabomber’s face on global warming, 350.org conducted thousands of rallies around the globe to show whom climate change really affects. In a year of mobilization, we also managed to block—at least temporarily—the Keystone pipeline that would have brought the dirtiest of dirty energy, tar sands oil, from the Canadian province of Alberta to the Gulf Coast. In the meantime, our Canadian allies are fighting hard to block a similar pipeline that would bring those tar sands to the Pacific for export.

Similarly, in just the last few weeks, hundreds of thousands have signed on to demand an end to fossil fuel subsidies. And new polling data already show more Americans worried about our changing climate, because they’ve noticed the freakish weather of the last few years and drawn the obvious conclusion.

But damn, it’s a hard fight, up against a ton of money and a ton of inertia. Eventually, climate denial will “lose,” because physics and chemistry are not intimidated even by Lord Monckton. But timing is everything—if he and his ilk, a crew of certified planet wreckers, delay action past the point where it can do much good, they’ll be able to claim one of the epic victories in political history—one that will last for geological epochs.

Bill McKibben is Schumann Distinguished Scholar at Middlebury College, founder of the global climate campaign 350.org, a TomDispatch regular, and the author, most recently, of Eaarth: Making a Life on a Tough New Planet. Follow TomDispatch on Twitter @TomDispatch and join us on Facebook.