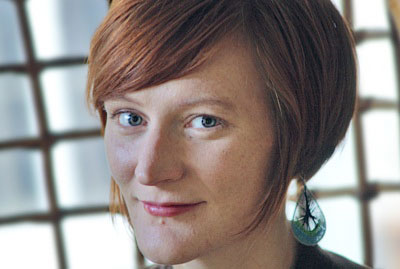 Maggie Koerth-Baker
Before the Lights Go Out: Conquering the Energy Crisis Before it Conquers Us
Wiley

Boing Boing science editor Maggie Koerth-Baker has built a career out of demystifying complicated science and technology issues. With her recent book, Before the Lights Go Out: Conquering the Energy Crisis Before it Conquers Us, she set herself the gargantuan task of explaining the evolution and potential fates of American energy system—from our wood-stove days to the smart grid. It was commenters on Boing Boing, the popular little-bit-of-everything blog, who woke her up to the need for such a book. “The same bits of confusion would come up over and over again—people wouldn’t understand how electricity worked and so on. There were a lot of little things that made it clear that even Boing Boing‘s well-educated, science-geekery population doesn’t know the context behind a lot of the news they’re reading.” Nor do pols, in her experience: “Most of Congress doesn’t understand any more about science than your mom.”

So she aimed her book at people who “might not even know that this is something interesting.” And successfully so: Before the Lights Go Out, written in a jaunty, conversational tone, isn’t the book for people seeking in-depth information about a particular topic, but it’s a great introduction to this immensely complicated realm. While her own interest in energy is driven largely by concern about climate change, Koerth-Baker says her research helped her realize that others are concerned about it for different reasons: national security, cost savings, self-sufficiency. “I wanted to be able to do more to reach out to the kinds of people who are often overlooked or assumed to be inherently against these things.”

She also didn’t want to repeat well-trod green-tech stories. “I wanted it to be focusing on people who aren’t usually the focus,” Koerth-Baker says. “I want to cover these undercovered, underreported communities, and I really made an effort to go look for those things.” She pored over local newspapers, pursued connections through friends and family members, and tracked down off-the-beaten-track tales of unlikely green energy champions. 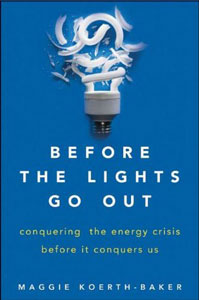 Accordingly, wonkish explanations of how batteries store energy and stats on how many BTUs we use each year are leavened with stories of people—like Bernice Dallas, a middle-class African-American woman and first-time homeowner who lives in a passive house in Urbana, Illinois—and initiatives like the Climate and Energy Project, a Kansas-based organization that seeks to bring people from diverse backgrounds together to talk about climate and energy issues. Beyond climate hawks, the CEP includes less obvious constituencies, including “hardline conservatives who thought climate change was a socialist plot” but who cared about energy for national security reasons, and Christians interested in Creation Care—which Koerth-Baker describes as the idea that “your Heavenly Father wants you to clean up after yourself.”

To engage people of such disparate perspectives requires a departure from the shock-and-awe tactics practiced by some energy writers, Koerth-Baker thinks. With David Owen’s recent book, The Conundrum, for instance, “I felt that there were so many chunks where we were saying the same thing but in really different ways. That kind of controversial, everything-you-think-you-know-is-wrong perspective gets attention but it isn’t a good way to talk to people about stuff—if it’s not perfect, it’s terrible, so you start ruling out everything until there’s nothing left.” Instead, she argues, we need to “start thinking about doing things that are better than what’s happening now. Look at the unintended consequences that could be out there, try to figure out which thing has the least problems. I think there’s a way to talk to people about this that doesn’t make them feel like they just have to go off and wait for the world to end.”

And that’s a tall order, she acknowledges: “All this stuff becomes so overwhelming that people just want to give it up.” While Koerth-Baker hopes to help people understand the challenges we face, she’s realistic about the limitations of solving energy problems through education alone. “It’s not a good thing that people don’t think about energy at all, but you can’t expect everyone to become experts in it; you can’t expect everyone to know everything.”

So how can we make it easier to be thoughtful about our energy choices? Koerth-Baker is bullish on technologies that seek to embed information in our daily lives in a way that’s easy to understand. When you bring out numbers, she says, people’s “brains shut down”— visual graphics are more powerful and memorable. For example, Koerth-Baker points to ideas like an energy orb that changes colors to let consumers know how expensive electricity is at any given moment.

We also need “ways to build in that information without needing a news hook,” she says. “One of the reasons we think more about transportation is because you’re always out there filling up your gas tank.” (Though of course, that’s not a silver bullet either—you can fill up your tank while grumbling—erroneously—about how the president is responsible for high gas prices.)To that end, Koerth-Baker concludes her book on a hopeful note, avowing that we can solve our problems so long as we can muster the willpower. Then again, willpower is itself a scarce commodity, so what to do?

One of Koerth-Baker’s biggest concerns is what she calls “the tribalism gap” in politics. It would help, she says, to have “some kind of grassroots movement with people from both sides who are interested in getting in the room together.” And for that to happen, you often “have to find people who are mediators between two different groups.” For example, to address the false belief that vaccines cause autism, doctors met with “mommy bloggers” to explain the science behind vaccines, hoping to get information to a skeptical community via a trusted messenger. Koerth-Baker thinks climate and environmental communities need to do the same thing—reach out to influential figures in the climate-change denial movement.

Writing the book, Koerth-Baker says, “really changed the way I thought about how we need to do energy and climate education. I was really frustrated with the kind of thing I see online”—the kind of partisan bickering where “the only people who agree with anything already agree with everything.” That mode of discussion is “completely useless,” she says—climate discussions are dominated by “the assumption on either side that the other people are evil.” (See, for example, the Heartland Institute’s new ad campaign comparing people who believe in climate change to mass murderers.) But Koerth-Baker thinks that can change. “Use whatever tools you can to start having respectful conversations about more things—you’re more likely to listen to someone you have emotional connection to.” She hopes that “cross-cultural conversations” that reject easy dichotomies might even help change the dialogue in Washington.

So, after writing the book, does she feel more or less optimistic? It depends. “I feel more optimistic that we can make some level of change,” Koerth-Baker explains. “We have the technology, it exists, we know how it needs to come together. There’s definitely momentum to do this on smaller scales. Change is going to happen.” But “the thing that was really both perspective-changing and depressing for me was the conclusion that so much of it is big, large-scale policy change. The local-level stuff helps, but at some point we need some top-down stuff kicking in or we won’t have change at the scale that we need.” There are “definitely some big roadblocks,” she adds.

Still, understanding what we need to do is an important first step. The biggest takeaway she hopes to give her readers: “Energy isn’t just sources, energy is systems. We have to change those systems if we want to make the changes to the personal and individual level.”