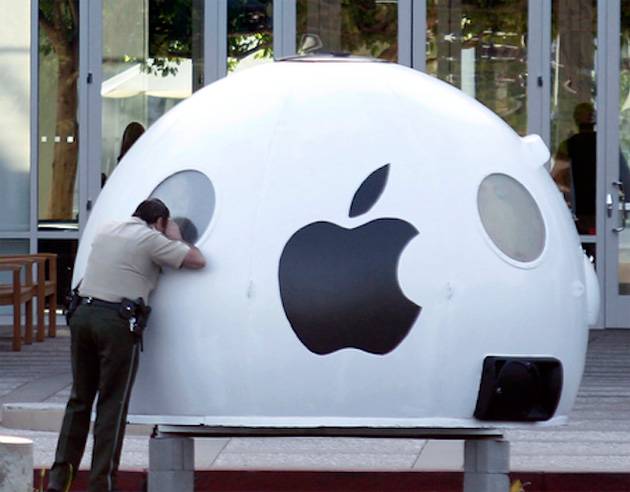 Greenpeace landed a giant iPod at Apple HQ on Tuesday to protest Apple's use of coal power.Photo: Greenpeace

This story was produced by Wired as part of the Climate Desk collaboration.

Apple is cleaning up its energy act.

The computer company says that by early next year, the energy used to power its worldwide data centers will all come from renewable sources, such as solar, wind power, or hydroelectric dams. It announced the news Thursday in a post to its website.

That’s a victory for the environmental activists at Greenpeace, who have been pressuring Apple for more than a year to clean up its act and commit to renewable energy.

A major sticking point has been Apple’s Maiden, North Carolina, facility, which is on the inexpensive but partially coal-powered Duke Energy grid. Apple had already started building a 100-acre solar array and a biogas energy plant on the site, but was still using Duke for a large chunk of the power at the 500,000-square-foot data center.

Now, the company says it will instead use local power providers who use renewable energy. “By the end of 2012, we’ll meet the energy needs of our Maiden, North Carolina, data center using entirely renewable sources.”

The company now plans to build a second 100-acre solar array a few miles down the road from the facility, but it isn’t saying when that will come online.

Greenpeace has stepped up its campaign against Apple in recent months. It sent cloud-cleaning activists to Apple stores in San Francisco, New York, and Toronto last month, and on Tuesday, two Greenpeacers were arrested after setting up a giant iPod in front of Apple’s Cupertino, California, headquarters.

Greenpeace is happy with Thursday’s announcement, but it’s not stopping its campaign. “Apple’s announcement today is a great sign that Apple is taking seriously the hundreds of thousands of its customers who have asked for an iCloud powered by clean energy, not dirty coal,” a Greenpeace spokesman said in an email message.

Greenpeace wants Apple—and Microsoft and Amazon, too, for that matter—to promise to make renewable energy a priority even as it builds new data centers. “Only then will customers have confidence that the iCloud will continue to get cleaner as it grows,” the Greenpeace spokesman said.

An Apple spokeswoman declined to comment, but referred us to the company’s new web page.

Apple says that another of its data centers, this one in Newark, California, will be 100 percent renewable by February 2013. A third data center, located just down the road from Facebook in Prineville, Oregon, will use wind, hydro-, and geothermal energy when it comes online. The company also runs data facilities in Austin, Texas, and Sacramento, California, both of which are plugged into the renewable grid, Apple says.