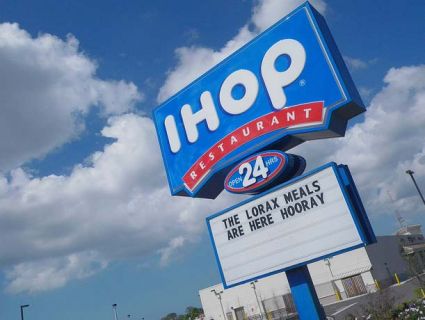 I’m going to start with a disclaimer: I really enjoyed The Lorax, the big-screen version the classic Dr. Seuss book about a little orange treehugger. The film debuts Friday around the country, and features the voices of stars like Danny DeVito, Zac Efron, and Taylor Swift.

It really is quite enjoyable, from the fluffy CGI Truffula Trees to the adorable fish. The stumbling block for the film isn’t the film itself—it’s the ham-handed way the promotion has been handled.

So, the quick synopsis for anyone who hasn’t read the book: A guy named “The Once-ler” tells a child the story of how he moved into a beautiful valley bursting with colorful Truffula Trees. The Once-ler then proceeded to chop down the trees so he could use their tufts to manufacture Thneeds, which are amorphous sweater-like things that can be used as a sock, a hat, a carpet, a pillow, or a sheet—”a Fine-Something-That-All-People-Need!” A fuzzy, mustachioed guy named the Lorax shows up, informing him that he speaks for the trees. But business booms, and soon the Once-ler and his Thneeds have destroyed the valley, filling it with “smogulous smoke” and “gluppity glupp.” The book ends with the valley now a barren, hazy wasteland, as the Once-ler tells the child that things could maybe improve if he cares enough to change them. The message isn’t very subtle: industrialism = bad, and trees = good.

The movie stays true to themes of the 61-page, 41-year-old children’s book, while expanding it to feature-film length and adding a modern edge, with chase scenes and a love story. And—spoiler alert—it concludes on a much more positive note than the book, which was a bit dreary, one must admit. (See my colleague Asawin Suebsaeng for a more thorough review of the film).

But this is the real problem with the marketing: It seems like whoever was in charge of promoting the film either didn’t get the message, or didn’t care. Take, for example, the fact that the movie is being used to promote a new gasoline-powered crossover SUV from Mazda. Mazda is partnering with the film and the National Education Association for the Read Across America program. The automobile maker has agreed to give a $1,000 donation to 21 schools in 20 cities to support their libraries, and an additional $25 every time a kid convinces their parents to go take a Mazda for a test drive.

The most glaring indicator that the marketing department is out of touch with the film is that it includes a musical number from the Once-ler about how capitalism is awesome and everyone needs a Thneed, which plays over a scene of his company decimating the landscape with all its biggering and biggering. It includes a flash of a billboard featuring an image of the Lorax, who is definitely not happy about this situation, sporting a Thneed under the headline “Lorax approved!” Somehow, the irony was lost on the marketing department, which has backed a long list of 70 “Lorax-approved” launch partners.

Sure, that list included some green-minded companies. But it also featured a disposable diaper company, “Truffula chip pancakes” from the International House of Pancakes, and Hewlett-Packard, where you can learn how to “print like the Lorax.” Universal Pictures says it was conscientious about what brands it worked with. “Our partners needed to legitimately be in the environmental space,” Universal’s president of partnerships and licensing, Stephanie Sperber, told the Associated Press. “The brands and messages had to ring true to the Lorax story.” But a lot of onlookers would beg to differ.

Jason Bittel, a copywriter and brand strategist with the Pittsburgh-based Fitting Group, was so incensed by the Mazda promotion that he penned a poem. While the partnership was probably good for Mazda, Bittel says, maybe it wasn’t the best fit among potential automobile partners for the film. Why not a hybrid or electric vehicle? Sure, it’s a cleanish car. But it’s still an internal combustion engine, which means it entails gluppity glupp and schloppity schlopp—the kind you see the cute animals suffering from in the book and film.

“They had an opportunity to partner with brands that could have wowed us with what they were doing in the world,” Bittel told Mother Jones. “Instead they found a brand that sort of worked. In the end, it’s still a combustion engine, and it’s still a movie about overusing resources, and that just doesn’t match up.” He likened it, colorfully, to the film Finding Nemo partnering with a company that makes fish sticks.

The in-school element of the Mazda partnership also rubbed people the wrong way—specifically the fact that Mazda and Universal are bringing a guy in a Lorax suit into schools to enlist children in their marketing campaign. “When there’s advertising in schools, it’s usually more subtle,” said Josh Golin, associate director of the Boston-based Campaign for a Commercial-Free Childhood. His group has launched a campaign to save the Lorax from the grip of corporate cross-promotions. But Golin says this is pretty par-for-the-course when it comes to kids’ movies these days—it’s just more alarming when the message of the film is environmental. “This is what happens when a book like The Lorax goes through the corporate machine,”  Golin said. “It gets chopped up and spit out in a million little products.”

I reached out to the National Education Association about the partnership, and asked whether it had any concerns about engaging with corporate partners like Mazda for its long-standing Read Across America program. Steven Grant, the manager of the program, noted that in many schools, “the librarian has been laid off, and there is no budget to purchase new books.” Fair enough. “In a perfect world,” he added, “all of our nation’s students would have the best, state-of-the-art, fully stocked libraries and classrooms; but unfortunately, the reality is that without community and corporate partnerships, many schools would go without any source for books and learning materials.” He balked at the idea that the campaign is marketing Mazdas to kids, adding, “We are, however, ‘marketing’ the need for them to read to succeed in school and in life.”

Joel Makower, the founder of GreenBiz.com, notes that any time a company tries to promote itself as green, it’s walking into risky territory. “There’s a sense of purity when it comes to environmental causes that sets a far-higher bar than other issues,” he says. Even if a company is trying to be more sustainable, they’re almost always accused of “greenwashing.”

While he hasn’t been following The Lorax debate all that closely, Makower says it probably won’t do much to damage the film’s reputation: “You’d have to commit some pretty awful sins of greenwashing to besmirch The Lorax.” And maybe we should have faith that kids are smart enough to see through the smogulous smoke. In a Washington Post article on the partnership, one of the kids was on point: “The Lorax doesn’t drive a car.”