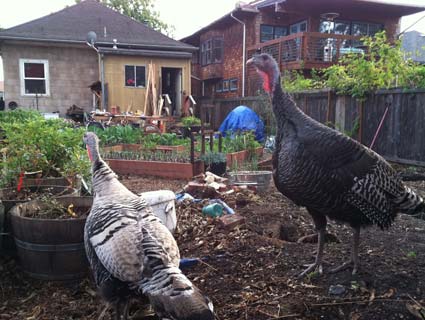 My urban turkeysPhoto by Kiera Butler

A few weeks ago, my friend was handed a flier (PDF) at a farmers market in Oakland, California. It’s from a local group called Neighbors Opposed to Backyard Slaughter that wants the City of Oakland to forbid people to raise livestock on their property. Around here, urban farming is a pretty hot issue; a nonprofit called City Slicker Farms has been promoting DIY food production for several years, and author and farmer (and Mother Jones contributor) Novella Carpenter brought the practice into the limelight with her 2009 book Farm City: The Education of an Urban Farmer, about her experiences at her Oakland farm.

Now I’m obviously biased on this issue; I’ve written on this site about the experience of raising turkeys for meat in my Berkeley backyard. But when I read through the anti-urban farming arguments put forth on the flier, I couldn’t resist making a rebuttal. Herewith, some sections of the flier, along with my responses. First up:

I called the Oakland Animal Shelter and asked whether it had seen an uptick in livestock (chickens, rabbits, and goats) since the urban farming trend took off around 2005. While the number of chickens at the shelter has gone up in recent years, from 213 in 2009 to 340 in 2010, shelter director Megan Webb attributes that increase to the city’s crackdown on fighting roosters in 2010, when the city confiscated hundreds of roosters. Aside from that, said Webb, “I’ve asked several of my animal control officers and they don’t feel like we have been seeing more livestock-type animals in the field or being impounded in the shelter.”

Obviously, this one’s a matter of personal parenting choice. But one thing I do know: Kids are very curious about where their food comes from. I witnessed this curiosity firsthand when a bunch of neighborhood rapscallions showed up for the slaughter of one of my turkeys. I’m not sure how they even knew about it. Word must have gotten around. Sure, there were giggles and morbid jokes aplenty. But I’m pretty certain that the kids got something valuable out of the experience, too. I talked to a little girl who had never seen a turkey up close before. A few others wanted to get right up close to the processing to see what it was all about. I’m not the only one who thinks that kids learn from raising and processing animals. The 4-H Club has been doing it for a century.

I wanted to see whether local real estate agents saw neighbors with livestock as a deterrent for potential home buyers, so I called up Elisa Uribe at Wells & Bennett Realtors, which sells homes in Oakland. “Keeping animals in the yard certainly does seem to be the trend, and I have not heard of it as a deterrent at all,” she said. “I actually have a rental property where the neighbors have three or four chickens. We’ve had a variety of different tenants and they’ve never complained. I don’t think that having neighbors with animals would lower property values at all.”

Now this one just strikes me as silly. I don’t know anyone who is raising animals instead of gardening; most urban farmers are doing both. In fact, urban farming groups convinced Oakland to change its rules so that people could sell crops from their garden out of their homes. Pitting animal-raising against vegetable-raising is a strange and nonsensical rhetorical strategy.

And one more from Neighbors Opposed to Backyard Slaughter’s website:

Introducing animal agriculture into Oakland’s food policy would be an unjust distribution of resources because it would serve the needs of a small group of people interested in creating artisan animal products instead of serving the low-income communities that the city of Oakland mandated the Planning Department to create food policy to serve.

Essentially, NOBS is arguing that allowing people to raise their own meat would be elitist, since everyone who raises animals is a foodie who wants to host heritage omelet brunches. That’s blatantly untrue. What about immigrants who come from places where tending animals is a way of life? And why shouldn’t people in the “low-income communities” get to produce their own eggs, which would likely be cheaper and healthier than eggs from the supermarket?

Local rules about urban farming vary widely. Oakland is currently in the process of revising its urban agriculture policy. Oakland Food Policy Council coordinator Esperanza Pallana told me that under current rules, residents who obtain a home occupation permit are allowed to sell plant-based crops and raw agricultural products—which includes eggs and honey, but not meat. Urban farming advocates are now in the process of trying to make it easier for urban farmers to raise their own meat. Meanwhile, in the neighboring community of El Cerrito, the city attorney ruled last November in favor of letting people raise and process animals on their property, arguing that forbidding such a practice could be a violation of First Amendment rights (for example, the rights of people who want to slaughter animals according to halal rules).

I could go on. And perhaps in some other post, I will. For now, though, I’ll leave it at this: My colleague Tom Philpott writes regularly about the deplorable practices of factory farms and the growing body of evidence that the meat that they produce is not healthy. To my mind, any rule that provides an alternative to mass-produced animal products would be a step in the right direction.