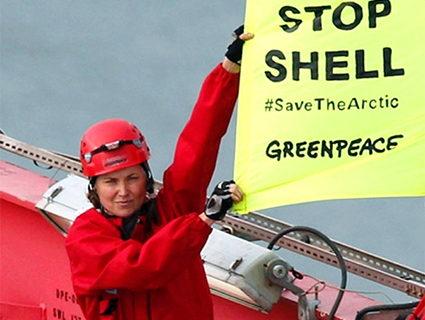 Lucy Lawless is illegally seated atop a 174-foot derrick rising from a drilling ship off New Zealand’s western shore, and she really, really doesn’t want to talk about Xena: Warrior Princess. The ship is called the Noble Discoverer, but Lawless has rechristened it the Ignoble Destroyer. It used to be called the Frontier Discoverer, and before that the Discoverer 511, and sometime before that, the Jessica. It’s a nearly 50-year-old ship, built for offshore drilling, and its owner, the Noble Corporation, has leased the ship to Royal Dutch Shell. This weekend, the Noble Discoverer is scheduled to head out on a 6,000 mile journey to the Chukchi Sea, off Alaska’s northwest coast, to break open the ice and suck out some of the 26.6 billion barrels of recoverable oil estimated to await in the Arctic’s outer continental shelf. That’s why Lawless left her house very early Thursday morning, her three kids still asleep, drove to Port Taranaki in Wellington, walked straight up the Noble Discoverer‘s gangplank along with five other climbing experts and Greenpeace volunteers, and scaled its massive derrick.*

The business about Xena is that Lawless actually hated working on that show: hated the costumes, hated the dialogue, hated the fight scenes. When it’s suggested that boarding a sea vessel and climbing its nearly 200-foot tower with messages about injustice sounds like exactly something the Warrior Princess would do, Lawless is curt: “I’m not Xena. She’s not me. I was just doing a gig.” She’s not up there as Xena, with the winds whipping around her head and peanuts and freeze-dried space food to eat, some water to drink, and a few hammocks for six people. She’s up there as a 43-year-old mom scared for her kids, and roiling mad.

Still, she allows, working on the show involved a fair bit of harness work—there were magical flight scenes and lots of leaping battles—which came in handy today.

There’s a lot of reasons to worry about offshore oil drilling, but the special concern with Shell’s venture in the Chukchi Sea is the way the ice melts and freezes each year along that part of the Alaskan ice shelf. Basically, the only window for cleaning up an oil spill, should one occur, is from mid-summer to roughly December of each year. Say the Noble Discoverer were to experience a Deepwater Horizon-style blowout toward the end of the window one year, sending an undersea rush of crude into the ocean. The ice would likely freeze over before the well was fully repaired, letting crude oil gush out for half a year or more until the ice thawed again and the leak could finally be fixed and plugged up. A top manager of a private oil-spill response company in Canada told the Canadian Parliament in 2010 that containment booms, the floating plastic fences trapping huge pools of oil made familiar through all those aerial photos of BP’s Gulf blowout, could be rendered useless in the Arctic winter. “You can’t lay boom on ice,” he said. “You can’t recover oil from the surface, because it’s hampered by the ice or under the ice, so it’s quite a different scenario, and there is really no solution or method today that we’re aware of that can actually recover oil from the Arctic.”

For its part, Shell says the Chukchi Sea fleet will include an icebreaker vessel equipped with a special “capping stack” developed to serve as a primary response tool in case of a blowout along the Arctic shelf. The capping stack would land on the failed blowout preventer, effectively slamming a manhole cover down on the open well. By the time the company submitted its Chukchi Sea oil-spill response plan (PDF) to the Interior Department at the end of last month, the capping stack system had not yet been fully tested—a Houston-based company was still building and testing the design, according to Shell’s own report. Still, the department rubber-stamped the plan three weeks later, and Shell’s Alaska exploration manager was ecstatic, calling it “another major milestone on the path to drilling in the Alaska offshore this summer.”

Lucy Lawless’s kids watch the Discovery Channel a lot, and she says it makes her heart hurt that on every other show they see, some species is vanishing or threatened. She’s gotten media calls on her cellphone all day, and she told the AP that her “sole biological reason for being on this planet” is to ensure those kids can flourish. “They can’t do that in a filthy, degraded environment,” she said. “We need to stand up while we still can.” She’s worried that even if Shell’s fleet makes it to Alaska and never blows a single valve, it’ll still pump tens of thousands of tons of pollution into Arctic skies, and global warming from the greenhouse gases and black carbon released by the fleet will melt off even more snow and ice in the polar regions. “Deep-sea oil drilling is bad enough, but venturing into the Arctic, one of the most magical places on the planet, is going too far,” she said.

By 1:30 p.m. in New Zealand, one of Lawless’s compatriots had been arrested by the five police officers who’d boarded the ship; the arrestee was one of the volunteers who’d stayed down below while the others climbed. For their part, the Noble Discoverer crew kept to themselves during the whole affair, and Lawless says no words were exchanged between occupiers and occupied. The hashtag displayed on the Greenpeace activists’ banners, #SavetheArctic, was multiplying across Twitter, broadcast to TV by local news copters hovering around the ship. Lawless’s kids were probably at school, and everyone was probably talking about what their mom was doing. She was starting to get a headache from the adrenaline comedown and tired of questions about what kind of car she drives (a Prius) and what she’s doing to reduce her own carbon footprint (flying less). She hoped to nap soon, given that there’s no telling how long she and her friends will be stuck on the derrick. It’s Shell’s move, she says—when Shell agrees to suspend its Arctic drilling program, they’ll consider coming down. She thinks back again to her Xena days, and admits there were some fun parts. “Like having someone around to brush your hair all the time,” she says. “This is much less fun than being on a show, but it’s much more important.”

Correction: This article previously stated that Lucy Lawless’s children were all boys. She has two boys and a girl.