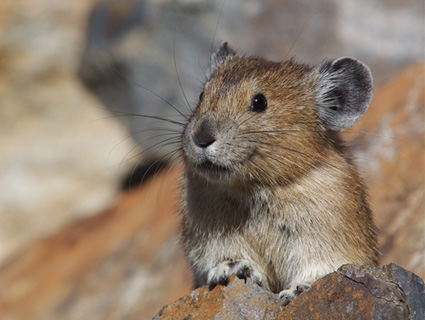 On a clear, sunny day last summer, I went looking for the endangered Karner blue butterfly. I boarded a southbound commuter train from Chicago and rode past an aging Ford assembly plant and through crumbling industrial parks, arriving at the Indiana Dunes National Lakeshore. My guide, US Geological Survey ecologist Ralph Grundel, led us onto a shady trail flanked by black oaks and sassafras. The forest gave way to open savanna, where Grundel stopped and pointed: A female Karner, her dime-size blue wings ringed in orange and white, trembled on a sunflower in the breeze.

Tiny though they are, Karners have a large fan club: Nabokov wrote about them (likening them to “blue snowflakes”), and there is a Midwestern literature society called the Order of the Karner Blue. But ecologists are interested in them for a different reason: Over the past decade, the Karners’ population in the Dunes has nose-dived, and rising temperatures could be to blame. “If we’re right, the Karners are in for a rough next few years,” says University of Notre Dame biologist Jessica Hellmann, who studies how global warming affects ecosystems. In the past, climatic changes would have prompted the Karners to move slowly northward. But now their escape routes are bounded by parking lots, factories, and industrial agriculture, with the next nearest patch of suitable habitat about 100 miles away—much too far for a Karner to fly.

The butterflies aren’t alone in feeling the heat. In a paper published in Nature in 2004, a team of British scientists estimated that up to a third of all species could face extinction by 2050 if the warming trend continues. Some might be able to migrate to more hospitable climes. But others—take the pika, a rodent that lives only on mountaintops, or the key deer, an island-dwelling mammal that can’t swim far—will be stuck. So Hellmann and a handful of other ecologists are considering a radical idea: assisted migration.

This might sound like a good Samaritan no-brainer, the critter equivalent of helping an old lady cross the street. Yet relocating animals would be a major departure from the last half-century of conservation practice in the United States. The 1964 Wilderness Act was based on the idea that the way to preserve biodiversity is to set aside tracts of land, step aside, and let nature take its course. That approach is insufficient in light of climate change, says Alex Camacho, a University of California-Irvine law professor studying assisted migration. “Our conservation laws are based on static ideas about nature,” he says, “not landscapes that are rapidly changing because of something humans did.”

Research on assisted migration is so new that there isn’t yet evidence of whether it works. But clearly it would be complicated and expensive. In order to move mammals, you’d have to trap and transport enough individuals to start a new population. In the case of the Karners, the process would involve breeding the butterflies in a lab and carefully moving them elsewhere—then planting plenty of purple lupine, the larvae’s sole food source.

Transplanting an ecosystem can be risky, as history shows. In the late 1800s, the USDA famously encouraged farmers to use kudzu, a vine imported from Japan, to control soil erosion. Farmers and gardeners have cursed the prolific weed ever since.

Hellmann doesn’t believe that relocating species threatened by climate change is a panacea. “It’s just not realistic to think you’re going to be able to move all the creepy-crawlies that no one cares about,” she says. But for even a few plants or animals, “it could be huge.”

The trick, then, is figuring out which species are worth the effort. Last July, a team of Australian researchers published a paper in Nature outlining a set of criteria. For example: How well will a species withstand the relocation process? Will the habitat remain suitable long enough? Could the species disrupt its new habitat?

Answering these questions will require years of experiments. With the Karners, Hellmann and her colleagues are up for the challenge. “What I do like about assisted migration is that it’s outside the box,” Hellmann says. “This climate change problem is an order of magnitude larger than what conservation biologists are used to dealing with. We need big ideas.”