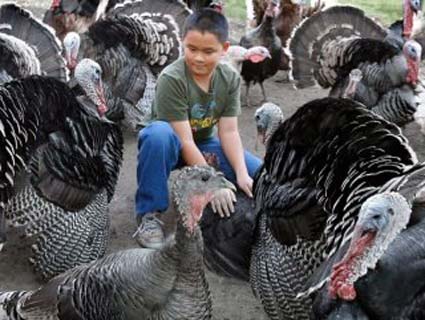 This post is part of my series on 4-H Club. Read about the club’s Big Ag ties here, and about kids raising pigs in Oakland here.

For the past few weeks, I’ve been blogging about the two heritage turkeys that my friends and I have been raising in our backyard. But our turkeys aren’t Berkeley natives. They spent the first 10 days of their lives on the Thode Family Farm in Sebastopol, California. There, the four Thode kids raise dozens of turkeys every year for a collaboration between their 4-H club and the local Slow Foods chapter. Back in September, I visited the farm to learn more about this cool partnership. 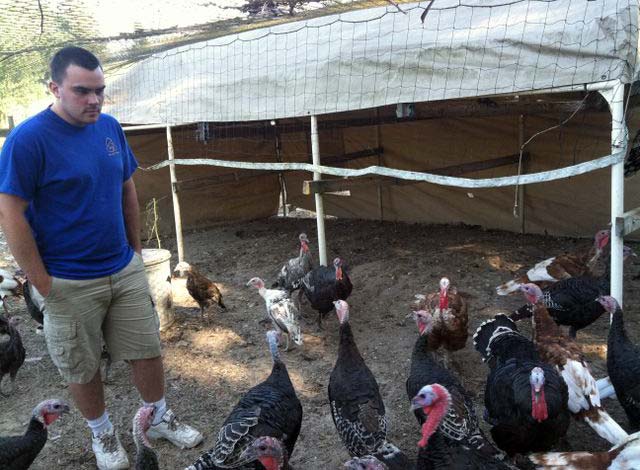 4-H alum Zach Thode and his family’s heritage turkeys in Sebastopol, CaliforniaThe turkey whisperer above is Zach Thode. A soft-spoken 21-year-old, Zach is the veteran turkey farmer of the family. Seven years ago, he and a few friends began raising heritage turkeys for their 4-H club. Through the club, the kids tried to sell their birds for Thanksgiving, but they had a marketing problem: Their customers wondered why they should pay $7.50 a pound when supermarket turkeys cost a fraction of that. “People didn’t understand that organic feed costs more, and so does giving them enough space to live in,” Zach told me. “Plus, we raise our birds for six months, whereas most supermarket birds only take three months or less to get to slaughter weight.” 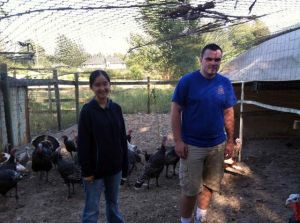 Janelle Thode, 16, and Zach Thode, 21, are two of the Thode family turkey farmers.

But then, Slow Food Russian River got wind of the project. “We were so impressed with how these kids were raising their birds,” says Jim Reichert, a poultry farmer and member of SFRR. “We wanted to support the project.” It was a natural match: The 4-H club had the birds, and Slow Food had the network of foodies to buy them. The project has grown every year since. This year, 11 kids raised 225 birds. Project leader Catherine Thode expects some kids to earn upwards of $1,000. (A few years ago, Zach used his earnings to buy a used pickup truck.)

By now, Zach has aged out of 4-H, but he still helps out with the project. “I like the 4-H community,” he says. “It’s a tight group of people.” We got to talking about 4-H’s corporate sponsorship, a topic I am kind of obsessed with. I asked Zach if he knew that agribusiness giants like Monsanto, Cargill, John Deere, and Philip Morris USA sponsored the club. He shrugged and said it made sense. “The shift from rural to urban living means that very few people want to work in agriculture,” he said. “So these companies have to invest in the youth. There is a danger of farms disappearing.” 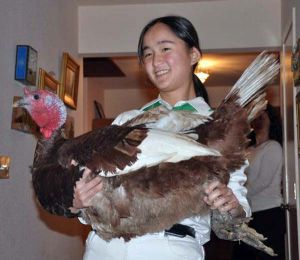 Janelle Thode, in her 4-H uniform, shows off one of her turkeys. Photo by Slow Food Russian River

In Zach’s case, it worked: After a distinguished career in 4-H (he’s won many prizes for animals he’s raised, as well as a quiz-show-style comp called the Avian Bowl and a poultry-judging contest), he is now majoring in agriculture business at Santa Rosa Junior College and hopes someday to be the manager of a farm or ranch. I asked whether he’d consider making use of the skills and values he learned in the heritage turkey project by working on a small farm. “Hopefully it would be somewhere that I can use what I learned in 4-H and at school,” he says, “but probably it will be wherever I can get a job.”

Right. The number of farms in the United States has been declining steadily for decades, and as my colleague Tom Philpott recently reported, young farmers say they lack the capital to start new farms. The good news, though, is that direct sales of local foods are on the rise.

“Especially around where we live in California, there really is a growing market for meat that was organically raised nearby, in a humane way,” Catherine Thode says. “It is a great fit for 4-H animals, since the kids spend so much time and effort raising them right, but I don’t know if it would catch on everywhere else.”

There’s some evidence that other 4-H clubs are becoming interested in organic and local food: In Pennsylvania, there’s this award for organic 4-H projects. In Oregon, this program helps schools start “sustainable living” clubs. A Google search revealed that a bunch of 4-H clubs now offer organic gardening. But when I searched the official 4-H site, I couldn’t find any official organic or local initiatives. The club hasn’t returned my request for an interview yet, but I’m curious to know whether there’s anything in the works.

In the meantime, the Thodes, like me, are getting for this year’s slaughter. But unlike me, they haven’t made the mistake of getting to know their birds. “At this point, I make sure they are treated well, but I don’t really get attached,” says Zach’s 16-year-old sister, Janelle. “There are just so many of them.” Spoken like a true farmer.