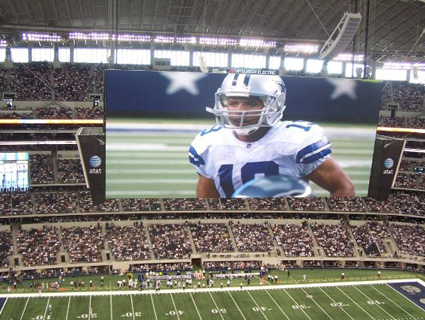 It’s a sunny fall day in Arlington, Texas, and some 80,000 fans have come from far and wide to cheer on America’s Team, the Dallas Cowboys. Most of them showed up early outside the team’s two-year-old, $1.2 billion stadium, filling 24,000 parking spots en route to some pregame tailgating. As they make their way to their seats in the largest domed structure in the world, (recyclable) commemorative plastic cups in hand, to watch the ‘Boys take on the New England Patriots—who chartered a flight from Boston, about 1,500 miles away—many stare at the massive video boards, twin 160-foot-by-72-foot behemoths that require 30 million LED lightbulbs.

Here, at a venue that, according to Forbes, consumes as much energy as Santa Monica, California, it seems reasonable to ask: Big-ticket sports can’t truly be green, can they?

Well, they’re trying. For all of Cowboys Stadium’s in-your-face excesses, the organization reportedly hopes to reduce solid waste by 25 percent, energy use by 20 percent, and water consumption by 1 million gallons annually. Not convinced? Then try baseball’s San Francisco Giants. “The way I look at it,” says Jorge Costa, the Giants’ senior vice president of ballpark operations, “this is a city of 42,000 people. And in a city of 42,000 people, you generate a lot of garbage.” The reigning World Series champs are three-time winners of the Green Glove Award, awarded to the major league team that has recycled the most over the course of the season. In the past several years, the Giants have diverted 75 percent of their garbage from landfills via recycling and composting; have installed 590 solar panels at AT&T Park, enough to power more than 5,200 homes since 2007; have seen their ballpark earn LEED silver certification; and have even created more sustainable ways to produce their famous garlic fries.

The Giants—located in an avowedly ecofriendly city—aren’t alone. Throughout baseball’s postseason, playoff teams have been showing PSAs touting Major League Baseball’s collaboration with the Natural Resources Defense Council. That relationship began nearly a decade ago, says the NRDC’s Allen Hershkowitz, who recalls a staff retreat back in 2004 that was attended by board member Robert Redford. “We were trying to figure out how to reach out to untraditional allies,” he says. “And Redford says to us, ‘You know, if you want to meet Americans, you’ve got to go to a baseball game or a football game. You’ve got to go to one of these stadiums. That’s where America is.'”

Hershkowitz soon met with MLB’s commissioner, Bud Selig, whom he calls “a dedicated environmentalist.” Shortly thereafter, the NRDC put together “Greening Advisors“—online primers that help front offices wrap their minds around everything from paper procurement and energy use to waste removal and transportation—for all 30 teams. Eventually, the group even put together a guide for clubs looking to invest in solar energy. Now, the Greening Advisors have spread to the NBA, the NHL, and Major League Soccer, and the NRDC has also worked with the NFL, the US Tennis Association, and the NCAA to reduce their environmental impacts.

So by guiding teams and leagues, the NRDC gains some traction with a new audience on top of some sway with the leagues’ various suppliers and sponsors. And the teams? The greening of sports, says Joel Makower, executive editor of GreenBiz.com, “has long moved past random acts of kindness.” Whereas team owner Jeffrey Lurie pushed his Philadelphia Eagles to become one of the first pro teams to invest in ecofriendly practices when it opened Lincoln Financial Field in 2003, most teams that have since adopted green practices have done so with the bottom line in sight.

Says one baseball exec, “A side conversation between two treehuggers has now really become a topic people are engaged in.”

For Scott Jenkins, the Seattle Mariners’ vice president of ballpark operations and the board chairman of the recently formed Green Sports Alliance (GSA), pushing that cost-benefit approach has been the most effective way to get his colleagues to listen. “Whether you think that climate change is real or not real, you don’t have to get into any of that,” he says. “You just have to talk business.” For example, the Mariners’ ballpark, Safeco Field, has an average energy cost of roughly $750,000; some fields’ energy bills approach $3 million.

The GSA, which started as a local information-sharing group of teams in the Pacific Northwest, now counts 26 pro teams as members. The group held its first Green Sports Summit in August. “What five years ago would’ve just been a side conversation between two treehuggers has now really become a topic people are engaged in on every team and at the league level,” Jenkins says.

Still, that focus on bottom-line results opens pro franchises up to criticism from people who see their efforts as nothing more than a drop in the bucket—or worse still, greenwashing. (After all, teams produce between 179 and 716 tons of carbon per game. For reference, an average American household of four people produces about 41.5 tons of carbon in a year.) Hershkowitz recognizes the concern and says his group has tried to hold teams accountable. “We vet everything they do,” Hershkowitz says. “From the napkins to the toilet paper used during construction to the disposable cutlery to their sponsorships.”

Makower believes that sports franchises, like many businesses with green initiatives, don’t get enough credit for the work they’re doing—mainly because most of the substantive changes are in waste reduction and material selection, not flashy projects like stadium-top wind turbines. “If they’re nibbling around the edge of this, then yeah, we have the right to call them greenwashers,” he says. “But when we see that what they’re doing is imperfect, do we beat them up or cheer them on? What we should do is say, ‘Thank you—now do more.'”