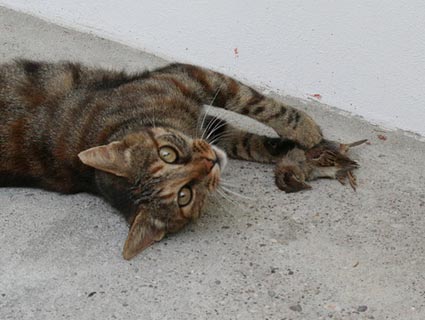 A little black cat lives in the crawl space under my house. Some weeks I see him every day, darting back into his burrow as I pull into the driveway. Then he’ll disappear for weeks at a time, and just when I’m sure that he’s found cushier digs, he comes back, like the cat in the old children’s song. He’s not much of a charmer—skinny, mangy, limping, and so feral that he bolts at the mere sight of people. But I can’t help feeling sorry for him, so a few months ago I began leaving out cat food. I congratulated myself on this great solution: He’d get a square meal and maybe keep the mice away, too. But when I told an ecologist I know, she was horrified. “Basically,” she said, “you’re subsidizing a killer.”

Surely she was overreacting. After all, how much damage could one pathetic little furball really do? As it turns out, a lot. Any cat owner who’s ever found a mouse corpse thoughtfully placed on her pillow knows that cats are efficient hunters. Domestic cats, officially considered an invasive species, kill at least a hundred million birds in the US every year—dwarfing the number killed by wind turbines. (See “Apocalypse Meow,” below.) They’re also responsible for at least 33 avian extinctions worldwide. A recent Smithsonian Institution study found that cats caused 79 percent of deaths of juvenile catbirds in the suburbs of Washington, DC. Bad news, since birds are key to protecting ecosystems from the stresses of climate change—a 2010 study found that they save plants from marauding insects that proliferate as the world warms.

What’s more, feral cats can carry some heinous people diseases, including rabies, hookworm, and toxoplasmosis, an infection known to cause miscarriages and birth defects. (There’s also speculation that it can trigger schizophrenia and even the desire to be around cats—some researchers blame the crazy-cat-lady phenomenon on toxo.)

Considering all this—and the fact that the world* feline population has tripled over the last four decades, to about 600 million in 2007—it’s clear we have a kitten problem. Cat advocacy groups believe they’ve found a simple solution: Trap ferals, sterilize them, then release them.

In theory, this strategy, known as trap-neuter-return (TNR), sounds great. If cats can’t reproduce, their population will decline gradually. Unfortunately, it doesn’t work. To put a dent in the total number of cats, at least 71 percent of them must be fixed, and they are notoriously hard to catch. Cash-strapped cities can’t afford to chase down, trap, and sterilize every stray—a process that costs roughly $100 per kitty.

And yet, the feline freedom fighters continue to promote TNR and battle to preserve feral colonies at all costs. Among the most powerful of these groups is Alley Cat Allies, a nonprofit whose main program, the Feral Friends Network, teaches people how to care for “community cats.” ACA, whose budget was $5.3 million last year, has enjoyed generous grants from cat-food vendors like PetSmart and Petco. Pro-feral groups—there are 250 or so in the United States—have used their financial might to woo wildlife groups. Audubon’s New Jersey chapter backed off on its opposition to TNR in 2005, around the same time major foundations gave the chapter grants to partner with pro-TNR groups.

All the caterwauling is working. At least 10 major cities, including San Francisco, Miami, and Chicago, have adopted TNR. And the crusade continues. Cat groups are trying to reinstate TNR in Los Angeles (where it failed miserably in the past) and make it illegal to remove ferals from a wildlife refuge in South Florida, where the cats have taken a major toll on an endangered woodrat. “These groups are incredibly well-organized,” says John Fitzpatrick, the director of Cornell‘s renowned ornithology lab. “And even though there are all these studies, they won’t change their minds. It’s a very emotional issue for them.”

Emotional indeed. Many of the biologists I spoke with say they’ve been harassed and even physically threatened when they’ve presented research about the effect cats have on wildlife. In 2005, research by Stan Temple, an emeritus professor of wildlife biology at the University of Wisconsin-Madison, was cited by a panel that proposed studying cats’ impact on birds in that state. In response, he received several death threats. “You cat-murdering bastard,” one activist wrote to Temple. “I declare an open season on Stan Temple.” (Police promptly arrested the suspect.) When Travis Longcore, science director of the environmental group Urban Wildlands, filed suit in Los Angeles against the city’s TNR program, an irate blogger posted his cellphone number.

But wildlife groups haven’t found a solution, either. The silver bullet would be a single-dose sterilization drug that feral feeders could slip into cat food. The Michelson Prize offers $25 million to anyone who can invent such a prophylactic, but nobody has even come close.

Until they do, biologists recommend a combination of strategies. For starters, quit feeding the ferals: Beyond sustaining strays, the practice often leads delinquent pet owners to abandon their cats outdoors, assuming they will be well cared for. The food can also attract the very pests that cats are supposed to keep at bay. The American Bird Conservancy‘s campaign to convince pet owners to keep cats indoors has had some success—bird deaths have declined by a third in areas that passed ordinances against free-ranging cats. Programs that remove feral cat colonies are typically more successful than TNR—but those usually involve euthanizing cats at shelters. Which, for obvious reasons, is a tough sell.

I can see why. In theory, I’m on the birds’ side. But could I call in the authorities and sell out my scrappy little friend? I’m not sure. Anyway, it’s a moot point: I live in a TNR city, so if I call animal control, he’ll eventually end up right in my driveway. But I’ve stopped putting food out. Towhees and robins of my yard, you’re welcome.

Quantifying annual bird kills isn’t easy, but US researchers have made some educated guesses.

*Correction: An earlier version of this article incorrectly stated that the US feline population has tripled over the last four decades.