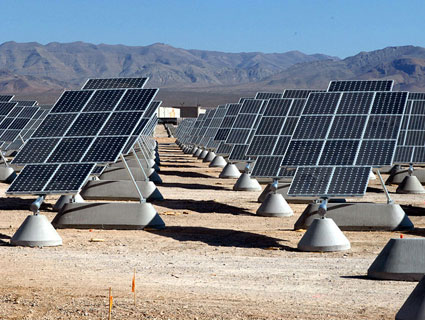 I think I found one!” I say, pointing at a small, round hole in the sand at the base of a cactus.

“Nope. That’s a little too small.”

I’m crouching in the middle of California’s Mojave Desert, about 150 miles northeast of Los Angeles. I’m here with Ileene Anderson, a biologist with the Center for Biological Diversity, and two Sierra Club volunteers, and we’re looking for tortoise burrows. The warm December sun brings out the desert colors: green creosote bushes, fading red wildflowers, golden cholla cacti rearing their prickly heads above the low scrub. To the north lie the Cady Mountains, where bighorn sheep move between peaks. Except for the chirping of a few birds—horned larks, loggerhead shrikes, mountain plovers, and American pipits—it’s quiet.

But not for long. Later this year, the desert will thrum with the pounding of backhoes, heavy trucks, and articulated haulers, rolling in to transform the Mojave into the epicenter of America’s solar-energy revolution. In 2009, President Obama announced that renewable-energy projects launched before December 31, 2010, could qualify for millions of dollars of federal stimulus money, kicking off an unprecedented solar gold rush. (The deadline has since been extended.) The California Energy Commission estimates that nine solar projects it recently approved will generate more than 4,000 megawatts of power—about 6 percent of the state’s grid capacity, up from less than 1 percent.

The Mojave, where the sun shines more than 300 days a year, would seem like a perfect home for the solar hub—unless you happen to be a threatened desert tortoise, in which case you can kiss your burrow goodbye. Across the country, environmentalists are finding themselves in the awkward position of having to choose between clean energy and wildlife: In the Midwest, wind farms ensnare bats and migrating birds, and hydropower dams in the Northwest decimate salmon spawning grounds. “We’ve been supportive of efforts to accelerate clean-energy projects,” says Jim Lyons, who studies renewable energy at the conservation nonprofit Defenders of Wildlife. “But the scale of these new projects is massive, and they could be enormously destructive to plants and animals.”

But so, of course, could global warming. In a recent study (PDF), Scott Loarie, an ecologist with the Carnegie Institution for Science, found that climate change is forcing ecoystems to creep northward by about a quarter-mile each year. That’s a problem, he says, since “only 8 percent of our protected areas are big enough to allow animals to move north ahead of climate change.”

The trick, Loarie says, is to figure out how to build renewable-energy projects while inflicting minimal damage on the landscape. Under the federal Endangered Species Act, energy companies are required to estimate how many animals will be displaced by a project, and to develop a mitigation plan. This sometimes means moving animals to another tract of land—think of it as a wildlife refugee camp. In practice, this doesn’t always work. Desert tortoises, the crotchety old farts of the animal kingdom, spend their entire lives within a few miles of their birthplace. If you pick them up and move them, they will promptly freak out and dehydrate themselves by peeing out several months’ worth of stored water.

And since tortoises rarely leave their burrows during the winter and summer, they’re notoriously hard to count. Solar companies’ census methods don’t always catch every animal. In one case, a company counted tortoises on a site it wanted in California’s Ivanpah Valley—but after the project was approved, another study found 35 percent more. Despite the evidence of imprecise census work, major green groups chose not to sue over the project. No one wants to look like they’re against renewable energy, explains Gloria D. Smith, a senior attorney with the Sierra Club.

Of course, solar projects needn’t destroy pristine landscapes at all. I visited one future plant site where farming had long ago scared off tortoises and other sensitive species. And consider that just outside the Mojave lie acres upon acres of flat, sunny spaces where the tortoise count is guaranteed to be zero: the roofs of warehouses and big-box stores. The idea has taken off elsewhere; in Germany, where solar installations have proceeded at eight times the US rate, hundreds of thousands of individuals and companies now sell their excess electricity back to the power authority.

But here in the US, where public land can be rented for a song, it’s more cost-effective for utilities to build a massive power plant out in the desert than hundreds of little ones atop privately owned roofs. And utilities usually aren’t keen on the idea of buying electricity from their customers, says Bill Powers, a solar-energy expert in San Diego. “Utilities make money off power plants; they’d lose money if big-box stores started making their power on the roof,” he says. To wit, the New Mexico utility PNM waged an unsucessful battle in 2009 to prevent residents and businesses from installing rooftop panels and selling the electricity they didn’t need back into the grid. The same year, Xcel Energy fought and lost a similar battle in Colorado.

In the coming years, you’re likely to hear a lot of this kind of argument: What are a few tortoises (or bats, or salmon) compared with thousands of megawatts of renewable energy? But the individual creatures are only part of the point, says Anderson. “In protecting the tortoise,” she says, “you end up protecting the entire ecosystem.” Doing that right will require cooperation between conservation groups, governments, utilities, and energy companies—not to mention plenty of biological grunt work.

We never found a tortoise during my day in the desert—never even saw a burrow. But, as Anderson reminded me, that doesn’t mean they weren’t there.

CASH ON A HOT TIN ROOF

Solar installations are pricey up front (up to $30,000 for a modest single-family home), and commercial projects can harm the environment. Four bright ideas:

Rent your roof In some states, companies like Sungevity, SolarCity, and SunRun will install solar panels on your roof and sell you the power they generate for less than you’d pay your local utility. Alternatively, some banks will lend you cash for the installation, then let you pay it back via your utility savings—with interest, of course.

Solar commune If you rent or live in the shade, rooftop panels aren’t practical. But some cities will let you buy into a centrally located solar project—reducing your electricity bill in the process.

Pimp that warehouse Some utilities are beginning to buy up commercial roof space: Southern California Edison, for example, is leasing enough square footage from warehouse owners to generate 250 megawatts of solar electricity—enough to power 162,500 homes.