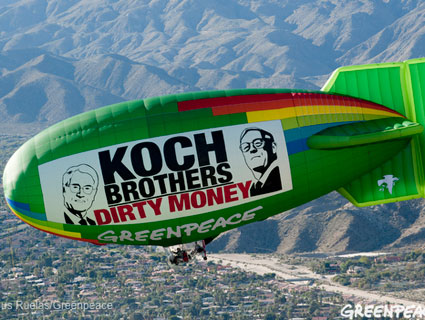 Last June, Glenn Beck paused in the middle of a rant about the economy and climate on his television show for an important, if rather unexpected, aside. “I want to thank Charles Koch for this information,” he said. Beck’s statement was totally without context, thrown in amid jabs at Al Gore and endorsements of the free market. Months later, it came to light that he recently had been a guest of honor at a semiannual confab sponsored by fossil-fuel billionaire Charles Koch and his brother, David, an event the pair hosts to connect conservative think tanks, politicos, and media types like Beck.

Koch Industries, a Kansas-based company founded in 1940 by father Fred Koch, is the second largest privately held company in America. Charles and David Koch are tied as the fifth wealthiest people in the nation, worth a combined $43 billion. Their money comes through a variety of business interests—ranching, mining, oil refining, and production of paper products, fertilizer, and chemicals. It would be an understatement to say that they have much at stake when it comes to efforts to cut climate-changing emissions.

Indeed, the brothers have spent $31.3 million since 2005 on organizations that deny or downplay climate change, according to a forthcoming report from Greenpeace that updates its report on Koch’s climate denial work released last year. But it’s the web of media influence the Kochs have created that perhaps accounts best for their power—particularly when it comes to sowing doubt about climate change.

Koch Industries describes its semiannual shindigs, which began in 2003, as an “opportunity for attendees and presenters to discuss ways of preserving and advancing economic freedom in the United States and to share ideas about the free-market principles that have made our country great.” The guest list for last weekend’s meeting is still under wraps, but the June 2010 event in Aspen drew a who’s who of conservative media stars; Besides Beck, there were Philip Anschutz, owner of the Examiner newspapers and the Weekly Standard; Charles Krauthammer, syndicated columnist and Weekly Standard contributor; Stephen Moore, Wall Street Journal editorial board member; and Ramesh Ponnuru, senior editor for The National Review.

Andrew Breitbart, the mastermind behind the conservative news sites Breitbart.com and Breitbart.tv, made his presence at the meeting known by rollerblading out to heckle some of the 1,500 protestors who’d gathered outside of the gate.

The Kochs’ influence over the conservative media may be obvious at such powwows. But to the general public, it’s not always apparent that the pundits they read about in blogs and see on TV have a direct relationship to the company. So says Derek Cressman, regional director of state operations with Common Cause, the group that organized the protests outside the Koch Bros gates. “They don’t see that connection between the pundit and the fact that it’s funded by an oil company,” says Cressman. “The global warming deniers aren’t being candid that their funding is coming from people with an enormous financial stake in how we deal with climate change.”

Take, for example, Planet Gore, the denialist blog at National Review Online. Planet Gore, along with NRO‘s main blog, The Corner, regularly features guest posts by representatives of think-tanks and foundations that have benefited from the Koch’s largesse. Prime examples include Chris Horner and Ian Murray of the Competitive Enterprise Institute, who have each posted hundreds of items on the site. NRO‘s blogs regularly promote the institute’s work to undermine climate science, such as the lawsuit the group filed against NASA last fall for temperature records. CEI has received more than $700,000 in Koch funds over the years.

Pat Michaels, a senior fellow at the libertarian Cato Institute, is another regular guest blogger. Cato has received $13 million from Koch family foundations since 1998. (Michaels’ refusal to disclose how much money he’s taken from fossil fuel interests has drawn scrutiny—most recently when a senior House Democrat raised questions about whether he lied on his resume about his funding from energy interests.)

Other guests representing Koch-funded organizations featured on National Review Online include Jim Manzi of the Manhattan Institute (which has received $1.5 million in Koch family money), Phil Kerpen of Americans for Prosperity ($5.5 million), and Jonathan Adler of the Federalist Society ($2 million).*

The Koch brothers also spent $1 million on a ballot measure last fall to derail California’s landmark climate law, and funded groups, including the California branch of Americans for Prosperity, that were key in promoting the measure. The Pacific Research Institute for Public Policy (PRI), which has received $1.2 million in Koch money, also rallied against the climate law with a report that made extreme claims about potential job losses it would cause. The day after the report appeared, author and PRI senior fellow Benjamin Zycher appeared on the Planet Gore blog to tout it. (The ballot measure failed despite all these efforts.)

The Kochs’ influence isn’t limited to fringe media. Krauthammer has used his Washington Post column to blast the “Church of the Environment” that believes the global warming is real, and he has appeared on Fox News to discuss why any legislation addressing climate change is “dead on arrival.”

The Wall Street Journal has regularly offered up its opinion pages to Cato’s Michaels to bash climate scientists. The Weekly Standard, too, has provided a platform for Koch-backed organizations like the American Enterprise Institute to accuse scientists of being a “corrupt cabal of global warming alarmists.”

For the Kochs, the millions of dollars they have invested in think tanks and electoral politics is small change. But the value of having access to media outlets that can promote the work of other projects they fund is hard to put a dollar figure on. “In addition to building their own think tanks, they built their own media,” said Kert Davies, research director at Greenpeace. “They have their own echo chamber built up, so then when they need it, when they need to amplify a message, they simply push a button and it’s there.”

* Sentence has been rewritten for clarity.