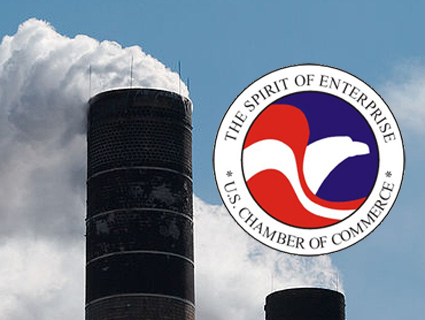 In Beijing, they celebrate when they have a “blue sky day,” when, that is, the haze clears long enough so that you can actually see the sun. Many days, you can’t even make out the next block.

Washington, by contrast, looks pretty clean: white marble monuments, broad, tree-lined avenues, the beautiful, green spread of the Mall. But its inhabitants—at least those who vote in Congress—can’t see any more clearly than the smoke-shrouded residents of Beijing.

Their view, however, is obscured by a different kind of smog. Call it money pollution. The torrents of cash now pouring unchecked into our political system cloud judgment and obscure science. Money pollution matters as much as or more than the other kind of dirt. That money is the single biggest reason that, as the planet swelters through the warmest years in the history of civilization, we have yet to take any real action as a nation on global warming.

And if you had to pick a single “power plant” whose stack was spewing out the most smoke? No question about it, that would be the US Chamber of Commerce, whose headquarters are conveniently located directly across the street from the White House. On its webpage, the chamber brags that it’s the biggest lobby in Washington, “consistently leading the pack in lobbying expenditures.”

The group spent as much as $33 million trying to influence the midterm 2010 elections, and has announced that it will beat that in 2012. That, of course, is its right, especially now that the Supreme Court, in its Citizens United ruling, opened the floodgates for corporate speech (as in “money talks”).

But the chamber does what it does with a twist. It claims to represent “three million businesses of all sizes, sectors, and regions.” The organization, that is, seems to speak for a country full of barbers and florists, car dealers, restaurant owners, and insurance salesmen, not to mention the small entrepreneurs who make up local and state chambers of commerce across the country.

At least when it comes to energy and climate, though, that claim is, politely put, a fib. The Chamber of Commerce doesn’t have to say where it gets its money, but last year a group called US ChamberWatch used one of the last disclosure laws still in existence to uncover a single pertinent fact. They went to the headquarters of the chamber and asked to see its IRS 990 form. It showed that 55% of its funding came from just 16 companies, each of which gave more than a million dollars. It doesn’t have to say which companies, but by their deeds shall you know them.

The chamber has long opposed environmental standards. In the 1980s, it fought a ban on the dumping of hazardous waste. In the 1990s, it fought smog and soot standards. On climate change, though, it’s gone pretty near berserk.

In 2009, for instance, one of its officials even demanded a “twenty-first century Scopes monkey trial” for global warming: “It would be the science of climate change on trial,” the chamber’s senior vice-president for environment, technology, and regulatory affairs explained.

That didn’t go over so well. Several high-profile companies quit the chamber. Apple Computer, the very exemplar of the universe of cutting-edge technology, explained: “We would prefer that the chamber take a more progressive stance on this critical issue and play a constructive role in addressing the climate crisis.”

Other businesses complained that they hadn’t been consulted. Some, like Nike, quit the organization’s board. “We just weren’t clear in how decisions on climate and energy were being made,” said a Nike spokesman.

One thing was for sure: they weren’t being made by three million small businesses—because many local chambers of commerce started quitting the chamber as well. From Florida and South Carolina to Missouri and Kansas, from Colorado and Pennsylvania to New Hampshire and Washington, dozens of local chambers have announced that the US Chamber doesn’t speak for them on these issues. In Largo, Florida, for instance, the head of the local chamber explained that the US Chamber was composed, “for the most part, of political action committees and business lobbyists. They hold little resemblance to the local chambers of commerce that have been the cornerstone of their communities for generations.”

Faced with that kind of incipient rebellion, the chamber backtracked just a little, issuing a statement saying that they didn’t really want a global warming version of a monkey trial after all, and that climate change was an “important issue.” (The same statement went on to call for transforming the United States into the “Saudi Arabia of clean coal.”)

The happy talk in public, however, has done nothing to change the agenda the chamber pushes so powerfully in private. The same year as that statement, for instance, the organization petitioned the Environmental Protection Agency to take no action on global warming on the grounds that “populations can acclimatize to warmer climates via a range of range of behavioral, physiological, and technological adaptations.”

Now, read that again. No suggestion here that 16 dinosaur companies adapt their business model to a reality that now includes melting ice caps, desertification and massive flooding, ever fiercer storms and acidifying oceans. Instead, they would prefer that every human being (and every other species) be so kind as to adapt their behavior and physiology to the needs of this tiny coterie of massive contributors. Forever.

What’s become clear is that the US Chamber of Commerce, an organization formed in 1912, more than a century after the first local chamber came into being, is anything but a benign umbrella for American small businesses. Quite the opposite: it’s a hard-edged ideological shop. It was Glenn Beck, after all, who said of the chamber that “they are us,” and urged his viewers to send them money. (Beck personally contributed $10,000 of the $32 million he earned in 2009.) The chamber’s chief lobbyist even called in to offer his personal thanks. It shouldn’t have come as a great surprise: Beck’s Fox News parent, Rupert Murdoch’s News Corporation, had given its own million-dollar donation to the chamber.

Thanks to the Supreme Court and its Citizens United decision, there’s no way to keep the chamber and others from running their shadowy election-time campaigns. As long as monster companies are pumping money into their coffers, it’s “free speech” all the way and they’ll simply keep on with their dodgy operations.

Still, the rest of us can stand up and be counted. We can tell the Congressional representatives taking their money that they don’t speak for us. We can urge more big companies to act like Apple and Microsoft, which publicly denounced the chamber. (It’s good to hear Levi Strauss, General Electric, and Best Buy making similar noises.) We need to hear from more dissenting chambers of commerce. It cheered me to find that the CEO of the Greater New York Chamber said, “They don’t represent me,” or to discover that just a few weeks ago the Seattle chamber cut its ties.

But it’s even more important to hear from small businesspeople, the very contingent the US Chamber of Commerce draws on for its credibility. Across America in the coming months, volunteers from the climate change organization I helped to found, 350.org, will be fanning out to canvass local businesses—all those bakeries and beauty salons, colleges and chiropractors, pharmacies and fitness centers that belong to local chambers of commerce.

The volunteers will be asking for signatures on a statement announcing that “the US Chamber doesn’t speak for me,” and offering businesspeople the chance to post videos expressing just how differently they do think when it comes to global warming, energy, and the environment. It’s a chance to emphasize that American business should be about nimbleness, creativity, and adaptation—that it’s prepared to cope with changing circumstances, instead of using political cash to ensure that yesterday’s technologies remain on artificial life support.

It’s easy to guess how the US Chamber of Commerce will respond to this campaign. Last week, a series of leaks showed that their law firm had been carrying out extended negotiations with at least one “security firm” to collect intelligence on the chamber’s adversaries, including the group that uncovered the tax data showing where their money came from. Once the leak was made public, the chamber’s law firm cut off the negotiations, but not before they received “samples” of the kind of intelligence they presumably wanted—pictures of their opponents’ children, for instance, or the news that one foe attended a “Jewish church” near Washington.

For the record: I don’t like the chamber’s deceptions. I belong to the Methodist church in my hometown. Keep away from my daughter.

With my colleagues at 350.org, I’ll do what I can to help undermine the chamber’s claim to represent American business. I don’t know if we can win this fight against money pollution, but we’re going to do what we can to clear the air.