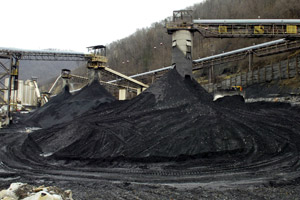 One of the most commonly accepted bits of conventional wisdom about energy is the notion that fossil fuels like coal are “concentrated” and renewable sources are “diffuse.” According to this notion, the huge land demands of renewable sources like solar thermal are an inconvenient reality that energy planners must face up to.

Sounds like common sense, right? After all, a lump of coal surely packs more energy than a dancing sunbeam or a fickle breeze.

The reason that solar power, wind power, and ethanol are so expensive is that they are derived from very diffuse energy sources. It takes a lot of energy collectors such as solar cells, wind turbines, or corn stalks covering many square miles of land to produce the same amount of power that traditional coal, natural gas, or nuclear plants can on just a few acres.

Fulmer is a pro-fossil ideologue, but it’s not just bloggers of that ilk who talk this way. So do some green capitalists such as Matthew Nordan of venture-capital firm Venrock. Here is Nordan’s recent reply to a question about when he expects solar thermal to become a very large part of the electricity mix: “My bet would be never.” Like Fuller, Nordan bases his pessimism about solar thermal on what he sees as the technology’s insatiable appetite for land. Building a solar thermal plant, he notes, requires “about ten times the amount of land required to build a comparable coal facility …”

Nordan’s answer makes sense if you’re just comparing the land footprint of a coal plant to the land footprint of a solar thermal plant. California’s proposed Blythe plant will require a whopping 7,000 acres of Mohave Desert in order to deliver 2,100 GWh per year. The area of a coal plant producing the same output will typically be one square mile (640 acres) or less.

But is that really a fair comparison? What about the land required to mine the coal? Shouldn’t that be part in the equation?

Unlike sunlight, coal does not fall from the sky. It has to be dug out of the ground, at the expense of substantial areas of forests, mountains, and prairies. (To get an idea of just how much land a single mine can occupy, see CoalDiver’s comparison of the size of a mountaintop-removal mine to the size of various cities.) Unfortunately, pinpointing the exact number of acres disturbed by mining is impossible, because the same federal government that each month tracks national production of coal down to the ton, and national production of electricity from that coal down to the kilowatt-hour, fails to accurately monitor how many acres of land are ruined in the process. The lax reporting of this massive sacrifice of land is rather like an army that brags about its victories but fails to count its fallen soldiers. It’s a reflection of national priorities, and not a flattering one. Under the 1977 Surface Mining Control and Reclamation Act, each state is required to report the number of acres disturbed by coal mining to the Office of Surface Mining. Most states do report this critical number, but a handful with the most destructive mining practices, most notably West Virginia and Kentucky, refuse to do so.

Nevertheless, by examining mine permits, it is possible to fill in the data gaps, and on that basis one can calculate the acreage disturbed by mining. Using that approach, a reasonable estimate of the annual extent of surface mining, which accounts for 70 percent of US coal production, is 104,000 acres. An additional 15 percent of US coal is produced by an underground technique known as longwall mining, which causes land subsidence. Longwall affects 13,000 acres each year in ways that range from minor annoyance (cracked roads) to major damage (disappearance of streams and ponds). For anyone interested in seeing the full extent of longwall’s effects on farms in southwestern Pennsylvania, Terri Taylor’s documentary film Subsided Ground / Fallen Futures is an eye-opener.

Overall, based on figures compiled by the US Army Corps of Engineers for the years prior to the Surface Mining Control and Reclamation Act, and by the Office of Surface Mining for the subsequent years, approximately 8.4 million acres of land have been surface mined in the United States. Continuing the current rate of surface mining for the next 60 years would require about 7 million more acres to be surface mined or longwall mined—and that’s based on the optimistic assumption that the quality of coal and the thickness of seams does not decline over time. In fact, such a decline is inevitable, based on the tendency to mine the best and most accessible coal first. So 7 million acres is a conservative estimate.

What about reclamation? Under the Surface Mining Control and Reclamation Act, mined lands are supposed to be fully restored. In fact, according to this analysis of reclamation in six Western states [PDF] by the Western Organization of Resource Councils and NRDC, and this analysis of reclamation in Central Appalachia by Appalachian Voices, there’s a giant gap between the intent of the law and the reality on the ground. In the West, during the decade 1996 to 2005, only one acre out of every 17 acres disturbed by mining emerged successfully from the regulatory bonding process, which ends with successful recontouring, establishment of vegetation, and restoration of aquifers. In some states, the record was even worse. In Wyoming, only one acre out of every 555 mined was reclaimed; in Montana, only one acre out of every 735. In Central Appalachia, the results are similarly dismal: According to the Appalachian Voices study, after decades of mountaintop-removal mining, 89.3 percent of MTR mining sites still show no post-mining economic development.

As for whether using the sun or using coal to generate a kilowatt-hour disturbs more land, the answer is: coal. Based on the current mix of mining techniques, a solar thermal plant like Blythe will produce 18 GWh per acre of land over a 60-year period. In contrast, a coal-fired power plant will produce 15 GWh per acre of mined land. In other words, the land footprint of coal is about 20 percent bigger than the land footprint of solar thermal.

When I emailed venture capitalist Nordan to question why he thought that solar thermal’s land appetite was any worse than coal’s, Nordan responded that what he was really talking about was the difficulty of finding suitable Blythe-sized parcels of land meeting all the necessary parameters, such as gradient, insolation, proximity to transmission, etc.

Fair enough. Finding 7,000-acre plots like the one needed for the Blythe project may not be easy. But solar thermal plants don’t actually need to be that large. In Spain, the median size of solar thermal plants under construction isn’t the 1,000-MW size of Blythe, but only 50 MW. And in the United States, the median size of announced projects is only 250 MW. In other words, around the world, the vast majority of solar thermal projects are in the 350-acre to 1,750-acre range. Screening for flat sites of 1,978 acres or smaller, one study conducted by the National Renewable Energy Laboratory [PDF] found a potential of 6,500 gigawatts of solar thermal potential in six Southwest states, more than enough to power the entire country.

In reality, whether enough suitable sites will be developed to make solar thermal a major slice of the US energy requirements seems mainly a matter of national priorities rather than actual availability. In the case of coal, Uncle Sam has bent over backwards to provide massive chunks of land for coal mining—in particular by leasing large federal tracts of coal on the cheap in the Powder River Basin region in southeast Montana and northeast Wyoming. A quick scan of existing surface and longwall mines shows a number in the monster range of 5,000-60,000 acres. (By comparison, the area of Manhattan Island is 14,500 acres.)

Yes, making electricity from solar energy rather than from coal will require plenty of land: as much as 6 million acres to replace all coal. But that amount compares favorably to other land uses including continuing to use coal (7 million acres over the next 60 years), Department of Defense installations (13 million acres [PDF]), rural roads (22 million acres [PDF]), and lawns (31 million acres). Substituting solar thermal for coal would actually reduce the amount of land disturbed in the process of generating electricity, and the intensity of disturbance would certainly be more benign.

Of all the arguments that might be made against solar energy, the argument that “solar uses too much land” is among the least convincing.

This article was produced by Grist for the Climate Desk collaboration.