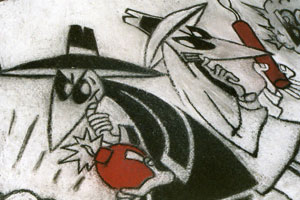 More than two years ago, Mother Jones exposed a private security firm run by former Secret Service agents that had spied on an array of environmental groups on behalf of corporate clients, in some cases infiltrating unsuspecting organizations with operatives posing as activists. Now, one of the targets of this corporate espionage is fighting back.

The suit charges that between 1998 and 2000 the chemical companies, the PR firms, and BBI “conspired to and did surveil, infiltrate and steal confidential information from Greenpeace with the intention of preempting, blunting or thwarting its environmental campaigns. These unlawful activities included trespassing on the property of Greenpeace, infiltrating its offices, meetings and electronic communications under false pretenses and/or by force, and by these means, stealing confidential documents, data and trade secrets from Greenpeace.” Greenpeace is seeking an injunction against further trespass and thefts of trade secrets, as well as compensatory and punitive damages.

The lawsuit stems from an April 2008 Mother Jones article that detailed a series of black ops carried out by BBI against Greenpeace and other environmental groups. The story was based largely on internal BBI records made available to the magazine by John Dodd, a principal investor and officer of BBI. At the time, Dodd said he decided to come forward after discovering that BBI’s employees had defrauded him and engaged in unscrupulous snooping on activist groups and other targets.

Mother Jones reporters sifted through thousands of pages of internal documents that included billing records, surveillance reports, and email correspondence from undercover operatives in Washington and Lake Charles, Louisiana. Contained in the trove were a variety of internal Greenpeace records, including strategy memos, campaign plans, donor lists, and documents that included credit card information and the social security numbers of Greenpeace employees. Also unearthed were similar records belonging to other organizations, including Friends of the Earth, GE Food Alert, the Center for Food Safety, and Fenton Communications, a PR firm that represents various environmental groups.

Following Mother Jones‘ story, Greenpeace officials were granted access to Dodd’s BBI archive, where they eventually recovered more than 1000 pages of internal Greenpeace records. The complaint charges that: “The vast majority of Greenpeace’s internal documents that were ultimately recovered from BBI were in pristine condition, giving rise to the inference that these documents were not taken from trash dumpsters, but rather from recycling receptacles and/or…from inside Greenpeace’s office.”

BBI’s operations included clandestine night-time dumpster diving sorties into Greenpeace’s trash and recycling bins in the alleys of downtown Washington. The firm’s operatives were assisted by at least one active duty Washington police officer, who may have used his badge to gain entrance into Greenpeace’s gated trash area, the environmental group alleges. Between July 1998 and October 2000, BBI operatives stole internal Greenpeace records on at least 100 occasions, the group claims.

According to the complaint, internal BBI documents show that “BBI employees or contractors tested multiple three- and four-digit codes and documented whether each code was successful in granting access” to Greenpeace’s Washington headquarters. The suit also charges that BBI “appears to have broken into the offices” of a Louisiana law firm engaged in litigation against the Condea Vista chemical company (now Sasol North America).

Undercover operatives employed by BBI organized an elaborate system to penetrate Greenpeace, sending at least one contractor posing volunteer to surveil Greenpeace’s Washington offices, the complaint states. Meanwhile, other BBI employees and contractors spied on Greenpeace employees and other activists in Lake Charles, Louisiana, where environmentalists were engaged in a fierce campaign against Condea Vista.

Condea Vista employed BBI directly and through its PR firm, Dezenhall-Nichols (now Dezenhall Resources). From October 1998 until July 1999, Dezenhall paid BBI about $150,000 to work on the “U Street Project”—a reference to Greenpeace’s then-headquarters on Washington’s U Street. Dezenhall’s chemical company client was particularly interested in campaigns targeting the manufacture and sale of plastics containing the polymer polyvinyl chloride. The objectives of the U Street operation, according to the complaint and internal BBI records, “explicitly included obtaining financial information about Greenpeace: ‘funding’; ‘[d]onors: corporate political, private’; and ‘money trails.'”

Meanwhile, BBI also launched a similar operation in Louisiana dubbed the “Lake Charles Project” to collect internal information on campaigns by Greenpeace and other environmental groups. For the Lake Charles operation, BBI relied heavily on a freelance “research consultant” named Mary Lou Sapone. She recruited a school teacher to infiltrate a local environmental groups, where he eventually become a board member. The Greenpeace complaint alleges that Sapone also “cased Greenpeace’s U Street Office while masquerading as a prospective campaign volunteer.” In July 2008, Mother Jones revealed that Sapone, using her maiden name, McFate, had for more than a decade infiltrated the gun control groups on behalf of the National Rifle Association.

While BBI was working for Condea Vista, it also targeted Greenpeace on behalf of Dow. At the time, Greenpeace was aggressively campaigning against the spread of genetic engineered foods and was pushing to get the federal government to impose strict regulations on the industry. (Dow is a major player in this field.) The suit alleges that Dow hired the public relations firm Ketchum to keep tabs on the plans of its critics; the PR firm in turn employed BBI to spy on Greenpeace.

The complaint describes a July 1999 meeting in which representative of BBI, Ketchum, and Dow convened at an Annapolis, Maryland, hotel “to discuss the surveillance of Greenpeace and other environmental organizations critical of, or likely to criticize Dow Chemical.” There, the BBI team “delivered a power-point presentation about Greenpeace which included confidential, prospective budget information and campaign plans.” According to the complaint, Ketchum paid BBI more than $125,000 for confidential information on Greenpeace.

Dow Chemical, Ketchum, and Dezenhall Resources did not immediately respond to requests for comment. Informed of the law suit by Mother Jones, a Sasol North America spokeswoman said, “Wow.” She then directed a reporter to a past statement by the company saying it had no comment on matters that occurred prior to Sasol taking ownership of Condea Vista in 2001.

On Monday, Greenpeace posted a “SpyGate” page on its website devoted to the lawsuit. “The purpose of this lawsuit is twofold,” the group explained on its site. “First, we aim to put a dent in the arrogance of these corporate renegades who have for too long believed that ethics do not apply to their pursuit of ever-higher profits. Second, we believe it is every citizen’s right to stand up for the health of their children and community without fearing retribution, an invasion of privacy, conspiracy against them or theft of their belongings. We believe Dow and Sasol conspired to do this to Greenpeace; we aim to stop this before it happens to you.”