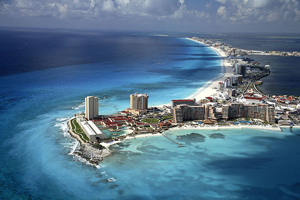 The hope—and hype—surrounding the climate negotiations in Copenhagen last December was hard to miss. Even though the possibility of securing a new global climate pact was scaled back significantly in the weeks ahead of the summit, the level of engagement was unprecedented. President Obama and more than 60 other heads of state from around the world flew in for the brutal final days of the summit, and in the closing hours a deal of sorts was finally hashed out.

But a year later, there’s almost no build-up to the sixteenth Conference of the Parties, the annual climate negotiation hosted by the United Nations Framework Convention on Climate Change. The two-week negotiating session starts on Nov. 29 in Cancun, Mexico. And while it’s happening much more quietly this year, the 2010 meeting could make or break the future of global negotiations. There could be an opportunity south of the border to reinforce commitments and establish new frameworks for cooperation—but if there’s no real agreement on what comes next, the summit could leave the path forward somewhat treacherous.

“I think they’ve set the expectations at a place where they might actually be able to meet them, which I think is good news,” said Alden Meyer, director of strategy and policy at the Union of Concerned Scientists. That said, he continued, “If they don’t get something out of this meeting after the failure at Copenhagen, then it raises questions about the whole UN negotiating process.”

“There is a risk if you don’t make significant progress in Cancun that countries and others are going to start spending their energy in other forums,” said Jennifer Morgan, director of the climate and energy program at the World Resources Institute. Some countries have suggested that venues like the G20 might make it easier to hash out disagreements. But those, Morgan points out, don’t generally include the least-developed nations and those most vulnerable to climate change.

Whether the UN process can produce a global agreement is still in question. After two weeks of deliberations that at times grew rancorous last year, Obama and leaders from Brazil, India, and South Africa, and China hammered out an eleventh-hour deal that came to be known as the Copenhagen Accord. It was more a statement of intent than an actual plan, and it left quite a few countries unsatisfied—particularly those who weren’t in the room that final night.

But the Copenhagen Accord at least solidified some basic commitments. Countries agreed that they would aim to keep planetary warming to under 2 degrees Celsius (3.6 degrees Fahrenheit), and would each put forward domestic plans to reduce greenhouse gas emissions. In the months since then, 138 countries have either formally signed on to the accord or signaled that they would—and combined they are responsible for more than 86 percent of global emissions. Industrialized nations also committed to raising $10 billion each year for the next three years for so-called “fast-start” funding to help developing nations cut emissions and adapt to the changes already taking place. There was an additional agreement to establish a long-term fund of $100 billion per year by 2020 to meet those goals.

But what that accord really meant was somewhat ambiguous. It was not formally adopted by the participants, since several countries—including Venezuela, Bolivia, Tuvalu, Cuba, Sudan, and Nicaragua—objected. It did not even offer a timeframe for reaching a legally binding deal—which, heading into Copenhagen, had been the goal. This year, countries will consider how to formalize those commitments and build upon the specific elements. “You’re likely to get an agreement in Cancun that captures the spirit of a lot of the Copenhagen Accord, with a lot more detail on some of the key pieces,” said Jake Schmidt, international climate policy director at the Natural Resources Defense Council.

World leaders will also need to figure out where talks are heading. “Ideally for the planet there would be a date by which we would have a new, legally binding agreement—that would be the best case scenario for an accountable system to collaborate globally on climate change,” said Angela Anderson, program director for the US Climate Action Network. But she—and most in the environmental community watching Cancun—isn’t expecting that to happen this year. US climate envoy also downplayed the prospects of laying out a concrete time frame for a new deal. “I think it should get done when it’s ripe,” he told reporters last week, adding that he “would rather have the concrete stuff done” before pursuing a legally binding treaty,

Even if leaders don’t set a new due date for a deal or even attempt to assess whether a treaty is possible, they will need to have serious conversations about the future of the Kyoto Protocol, which is currently the only legally binding deal on global emissions reductions and is set to expire at the end of 2012. The least-developed countries want a second commitment period for Kyoto pledges in order to keep something legally binding in place, which ensures both that some of the world’s biggest emitters are formally committed to reductions and that there is aid available for transition. But the United States notably never signed that treaty, and major emerging powers like China and India are also not included in the agreement. A new deal would ideally include all those nations agreeing to their own proposed reductions (which would be based on what they are able to commit to) in a formalized agreement.

Zimbabwe’s Margaret Mukahanana-Sangarwe, chair of the UNFCCC working group focused on the new climate deal, said that COP16 will “need to address big questions, otherwise nothing will move forward,” Mukahanana-Sangarwe said.  For Cancun to deliver progress, she said, leaders need to address “the apparent deadlock” over goals for cutting carbon, she said, as well as the details of the financial commitments made to developing countries.

Specifically, there will need to be progress on how countries will formalize the commitments they made last year, and how to keep track of what each country is actually doing when it comes to cutting emissions—a  major point of contention between the United States and China last year. The US has already accused China of not following through on the agreement, in which the country pledged to reduce its greenhouse gas intensity 40 percent to 45 percent by 2020.

And as for the US? Well, as anyone following the issue knows, the prospects for action on climate change have only gotten more muddled in the year since Copenhagen. The Senate failed to pass a bill dealing with greenhouse gas emissions, and the prospects of enacting a law over the next two years with a Republican-led House dominated by people who don’t think the planet is even warming is certainly slim. The Environmental Protection Agency is moving forward with its regulations on greenhouse gas emissions, which US negotiators have said they believe will put us on the path to the emissions cut of 17 percent below 2005 levels that the US committed to in Copenhagen last year.

But the chances of the US signing a treaty—which requires 67 votes in the Senate—are pretty much nonexistent. There are also significant questions about whether the US will be able to follow through on providing its share of the promised money to the global fund outlined last year since much the next Congress will likely focus on cutting spending.

“Countries are realizing they might have to go forward without the US again,” said UCS’s Meyer. He pointed back to Kyoto, where the US negotiators signed a deal but it was never ratified in the Senate. “A lot of countries are thinking they’ve seen this movie before.”

Despite the very low expectations for a major agreement, there are major areas where the observers expect to see progress this year: the establishment of new programs to help countries adopt more climate friendly technologies, movement on the details of the global climate fund, and the creation of programs to prevent deforestation (known as Reducing Emissions from Deforestation and Forest Degradation, or REDD). Progress in those areas would go a long way toward building trust and partnership between nations, observers say.

“We’re not going to see a breakthrough on a new treaty, but we will see significant progress on creating things and launching things that can make a difference on the ground,” said Morgan.

Editor’s note: Kate Sheppard will be blogging live from the Cancun climate talks starting Tuesday, November 30th. Catch her dispatches over at The Blue Marble.