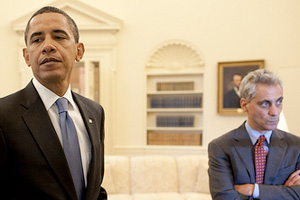 Engulfed by the worst environmental disaster in US history, Barack Obama is trying to change the subject. On May 26 the president pledged to “keep fighting to pass comprehensive energy and climate legislation,” and on June 2 he declared, “The time has come, once and for all, for this nation to fully embrace a clean-energy future.” Pivoting from oil spill to climate bill makes sense; a mandatory, declining cap on emissions is America’s best chance to wean itself off of fossil fuels—and Obama’s best chance to wring some good out of the catastrophe. With the Senate expected to vote today on Sen. Lisa Murkowski’s (R-Alaska) call to march in the wrong direction—a resolution stripping the EPA of the power to regulate greenhouse gases—this will clearly be a battle. But what did the president mean by “keep fighting?” As the campaigners on the front lines of the climate war know, Obama has not yet begun to fight.

In the early days of the administration, Al Gore sent the new president a confidential memo explaining why it was essential for the US to pass a climate bill in 2009, before the UN summit in Copenhagen, where the world was supposed to negotiate a successor to the Kyoto Protocol. If the US delegation arrived empty-handed in Copenhagen, Gore wrote, the world would have no chance to reach a new global deal. American leadership was the crucial and still-missing ingredient. But except for a few days in June 2009 spent whipping the vote for the Waxman-Markey climate bill, the White House has not pushed for the cap. It has been all talk—and even the talk tends to get watered down.

As Earth Day 2009 approached, for example, Obama and his strategists decided that a clean-energy event was needed. When the president prepped for the speech, to be held at a former Maytag factory in Iowa that now makes towers for wind turbines, he said he hadn’t been talking enough about the specifics of climate policy—a complaint that the entire climate community shared. Climate czar Carol Browner saw an opportunity. Two months earlier, she had prepared a policy document based on a short-lived interagency process designed to reach an internal consensus on climate policy, but the process got stalled and the document was languishing on Chief of Staff Rahm Emanuel’s desk. Browner wanted to dust it off and use it to prep the president on a deeper level of policy detail, so the Iowa speech could send signals to Congress about his position on the design of a climate bill.

Emanuel and strategist David Axelrod didn’t think that was a good idea. Better to stick to our basic clean energy message, they argued, and stay out of the policy weeds. It was the sort of fight that happened all the time in the Obama White House, and the True Believers ended up losing every time. “It was lather-rinse-repeat a thousand times in a thousand ways,” said one. “You had this incredible green cabinet of really committed people, but the only thing that really matters is what the president says—so everyone was trying to get words into his mouth. And Rahm was trying to keep the words out of his mouth. It was just a chronic pattern of infighting.” The green cabinet—Browner, Energy Secretary Steven Chu, EPA administrator Lisa Jackson, and others—thought there was a strong case to be made for the clean energy economy. With a little effort and focus, they argued, Obama could marshal the arguments, beat back the opposition, and move the needle of public opinion. “But then there were the Washington operatives on the political and economic teams who did not want to waste a bunch of bullets on some weirdo green crusade when the polling numbers weren’t there, and it would be a bloody battle to take that hill. They said, ‘Let’s go take some other hill.'” 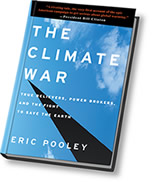 Listen to an interview with The Climate War
author Eric Pooley.

On Earth Day in Iowa, Obama used a fairly basic set of talking points for the speech, focusing on the energy provisions in the stimulus bill and the need for a carbon cap. He showed what an effective teacher he could be, explaining that America already placed limits on “sulfur dioxide and nitrogen dioxide and other harmful emissions, but we haven’t placed any limits on carbon dioxide and other greenhouse gases. It’s what’s called the carbon loophole,” he said, borrowing a phrase from Gore’s Alliance for Climate Protection. He framed the issue nicely, sweeping away a false choice that dated back to Reagan: “The choice we face is not between saving our environment and saving our economy. The choice we face is between prosperity and decline.” He even gave a mini-tutorial on how a market-based cap would work, while carefully avoiding the term “cap and trade,” which Axelrod had declared radioactive.

The administration was sending mixed signals about whether the president would spend political capital trying to pass the cap. Dealing with the White House required a one-day-at-a-time, God-grant-me-the-serenity mindset, especially when it came to Rahm Emanuel. The chief of staff was an obstacle to climate action.

When corporate and environmental leaders from the US Climate Action Partnership (USCAP) went to the Roosevelt Room in the West Wing for a late spring 2009 meeting with Emanuel, they could see that he didn’t much care about climate change. What he cared about was winning—acquiring and maintaining presidential power over an eight-year arc. Climate and energy were agenda items to him, pieces on a legislative chessboard; he was only willing to play them in ways that enhanced Obama’s larger objectives. He saw no point in squandering capital on a lost cause. The White House could claim victory if Congress passed a beefy energy bill without a cap—never mind that doing so could torpedo Copenhagen and delay serious green house gas reductions, perhaps for many years. At the USCAP meeting, Emanuel made his views clear: “We want to do this climate bill, but success breeds success,” he said. “We need to put points on the board. We only want to do things that are going to be successful. If the climate bill bogs down, we move on. We’ve got health care.” Rep. Henry Waxman (D-Calif.) had to move the bill out of committee before the White House would get in the game.

Emanuel had a point. If Waxman couldn’t win a simple committee vote without Obama’s help, no amount of presidential jawboning would carry the day. But his formulation threatened to become yet another climate catch-22: the White House wouldn’t engage unless the votes were there, but the votes wouldn’t be there unless the White House engaged. Obama aides spoke of a “stealth strategy” in which the energy team worked behind the scenes but the president was deployed sparingly.

“If you consider the difficulty of trying to pass cap and trade during a recession,” one Obama adviser said, “keeping a lower profile makes sense. Why stir up the opposition?” This was out of character for a president who was omnipresent in the media. His communications team put him on every magazine cover, granted “exclusives” to every news operation, sent him to five talk shows on a single Sunday. But on climate, they held him back because the green jobs message wasn’t playing well. The idea had been to pass the stimulus package and use the green jobs it created as proof of concept, “the first blade of the scissors,” as economic adviser Larry Summers described it. But only a fraction of the stimulus money would be spent in 2009, and tallying the number of green jobs it created was a bureaucratic nightmare—Van Jones was running an interagency process to figure out how to do it, but it would take months to get a defensible result. In the meantime, the deny-and-delay crowd was hammering at the whole idea of the clean-energy economy, and Axelrod’s polls were showing that people were increasingly skeptical of “green jobs.” That wasn’t going to change as long as the White House remained reluctant to get out there and fight the economic battle.

Obama’s stealth strategy had a fallacy at its core. The strategy assumed it was possible to be stealthy on this issue. It implied that if Obama didn’t elevate the issue, the opposition wouldn’t elevate it either. But the professional deniers—PR men and women paid to sow doubt and confusion on the issue—were getting louder every day. And Obama passed up chance after chance to talk about it.

When Waxman and Speaker Nancy Pelosi brought the Waxman-Markey bill to the floor, they forced Obama’s hand. He began pressing members, Gore worked the phones from Nashville, and Emanuel put aside his misgivings and mounted an effective whip operation. With an impressive last-minute display by Pelosi, the bill passed 219 to 212—and then the momentum dissolved in the face of conservative opposition. Obama’s stealth strategy failed to take into account the vigor of American denialism and opposition to cap and trade. It also failed to anticipate that unforeseen cataclysms could make climate legislation harder to pass in 2010 and beyond than it had been in 2009.

It’s a cruel irony that the epic disaster in the Gulf—a wakeup call to the need to reduce our dependence on oil—makes it harder to pass a bill that would help us do so. Expanded offshore drilling (and the revenue it would bring) was the chip Obama hoped to use to draw oil-state senators into a grand bargain that would also include subsidies for nuclear power and carbon capture and storage, with a modest carbon cap in return. The oil spill blew up that idea by taking expanded deepwater drilling off the table, at least for now. With few chips left, Obama appears to be hoping that public anger over the spill can help drive a new version of the climate bill. Soon, we’ll know whether he really means it. Democratic leaders in the Senate have been floating the idea of an energy bill without a carbon cap—which would be yet another failure of nerve by a group of legislators badly in need of adult supervision. Passing a real climate bill will be excruciatingly difficult. Waiting will only make it harder. It’s time for Obama to intervene on the Hill, silence the naysayers inside his own administration, harness the public mood, and make good on his promise to fight.

This piece is adapted from The Climate War: True Believers, Power Brokers, and the Fight to Save the Earth and published here as part of the Climate Desk collaboration. Listen to an interview with Eric Pooley here. Learn more about the book at www.EricPooley.com.