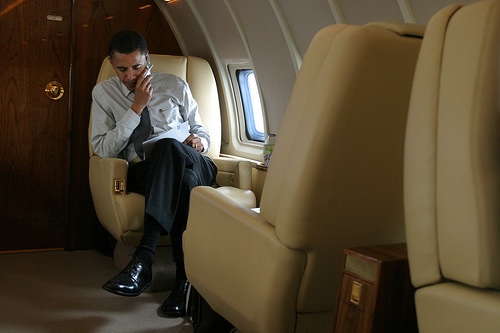 When President Barack Obama was in Oslo last week collecting his Nobel Peace Prize, thousands of officials from around the world were gathered 300 miles away in Copenhagen, trying to craft a climate change agreement. In his acceptance speech Obama made no direct mention of this. He remarked that “the world must come together to confront climate change,” but there was not a peep about the nearby efforts in Denmark or his scheduled attendance at the conference this coming Friday. Days later, when Obama delivered his weekly White House address, the subject was not the arduous attempt to reach a climate-saving global pact but passage of a financial reform bill in the House that would create a consumer financial protection agency.

Right now, the massive production under way at the overcrowded Bella Center in Copenhagen could be titled “Waiting for Obama.” Negotiations are lagging. China and developing nations are looking for more from the industrialized world: deeper emissions cuts and commitments to spend hundreds of billions of dollars annually to help poorer countries contend with climate change. The United States and Europe seek a deal with binding, verifiable obligations from the major emerging economies (China, India, Brazil, and others). On Monday, African nations, ticked off about a procedural matter with substantive implications, forced the suspension of working groups for a few hours. There are obstacles on top of logjams wrapped in intractable negotiating positions. Can Obama clear space for a breakthrough?

In recent days, the president has passed up opportunities to show that delivering the goods in Copenhagen is a top priority for him. The White House is certainly paying attention to the proceedings, sending several Cabinet members to the summit to promote the administration’s environmental and clean energy efforts. On Monday, the White House touted Energy Secretary Steven Chu’s announcement in Copenhagen of a new five-year, $350 million international program to spread clean energy technology in developing nations. But the United States’ portion of this tab will only be $85 million—chump change, in terms of the financial provisions being discussed at the meeting.

Since the summit began, negotiators have been suggesting that the United States must do more to make Copenhagen a success. (Some have said the same about China.) The emissions reductions proposed by Obama (17 percent below 2005 levels by 2020) are one-fifth the European commitment (20 percent below 1990 levels)—and much less than the 30 percent the Europeans say they will adopt if other nations (yes, the United States and China) go the extra mile. These proposed US cuts are even insufficient to meet the administration’s declared aim of limiting the expected average global temperature increase to 2 degrees Celsius. The Obama administration has pledged that the United States will implement an 80 percent cut by 2050. But that’s more promise than program.

Many negotiators—especially those from Europe—have reluctantly accepted that the Obama administration, facing a bipartisan headwind in the Senate that prevents more ambitious climate action, will not improve on reductions in the short term. “I want it to do as much as it can, consistent with getting a bill through the Senate,” said Ed Miliband, England’s minister for energy and climate change. Asked what other steps the United States could take, Swedish Environment Minister Andreas Carlgren mentioned expanding the deforestation provisions in the pending climate change bill. Neither he nor Miliband pressed the Obama administration too hard on reductions, but they both contended that the United States must move beyond its current proposal on international financing: a $10 billion annual fund for three years, with the United States covering only about one-seventh of the cost. “Long-term predictable financing is what the world needs,” Miliband insisted. He didn’t name a specific number, but he asserted that an annual pool of $100 billion in public and private funds by 2020 “should be the working figure.”

Can Obama dump that much money on the table at Copenhagen? Wouldn’t Republicans scream? After the White House announced that modest $350 million program, House GOP leader John Boehner slammed the administration for doling out money to other countries for “green” programs. Add three digits to this sum, and GOPers—and perhaps some coal state Democrats—would go nuts. Just as an election year is about to start.

For days, US environmentalists at Copenhagen have said that Obama needs to offer something new if the conference is to succeed. But after the US delegation gave little ground in the first week, environmentalists are now urging Obama to at least intensify his rhetoric. “Obama must send a signal that we can really trust that the United States will decarbonize and that climate change is his number one priority immediately after health care,” says Keya Chatterjee, head of the climate change program at the World Wildlife Fund. She acknowledged that a president cannot control everything, but he could muscle Congress to move speedily on the climate bill. Alden Meyer, director of strategy and policy for the Union of Concerned Scientists, adds, “He must indicate that he will continue to find ways to make deeper reductions and that we are willing to make our share of long-term financing.”

This is a mighty challenge for Obama. With developing countries ever on the watch for slipperiness from the industrialized nations, he has to somehow persuade them that he has the best possible intentions—without being able to offer any major new concessions. And can he truly declare climate change his next legislative priority, when the top item on the domestic political agenda is jobs, jobs, jobs? Can he even hint at expenditures of tens of billions of dollars, when the American public is displaying symptoms of bailout fatigue?

And there are a host of other issues that must be resolved in the next few days: what is the appropriate target for the expected temperature climb, what to do about the emerging developing powers, what sort of document will be produced, how will China’s emissions limits be monitored and verified, what’s the process for dealing with all the unfinished business. At this point, the widespread expectation is that Copenhagen will leave much to future talks. Already, negotiators are discussing a six- to twelve-month timeframe for mopping up. But the politics of climate change in the United States are likely not to improve during that period. Obama’s approval ratings are falling; an election is approaching. This may be his best chance to make a bold play that could break the deadlock—a move that many negotiators and observers at Copenhagen believe is desperately needed from the American president.

Yet on the same day Chu unveiled that $350 million program, the White House released a memo from Vice President Joe Biden, detailing how the stimulus has supported the development of clean energy jobs. It also announced that Obama on Tuesday would give a speech on “the economic impacts of energy saving home retrofits.” That stuff is important, but it’s no grand gesture. If Obama has any intention of mounting a Copenhagen surprise, so far there’s no tell.