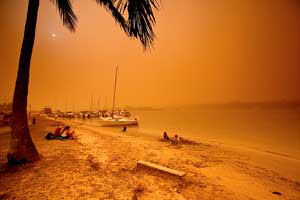 You won’t find geoengineering on the official agenda at the climate summit in Copenhagen. But for anyone watching the trajectory of the climate change debate, the controversial notion of intentionally modifying the planet or its climate system to counteract the effects of global warming is becoming increasingly difficult to ignore. Attracting almost no attention, Russia may have already conducted the first-ever geoengineering field trial. And if the climate talks at Copenhagen fail, it could give geoengineering advocates the lucky break they’ve been waiting for.

While it hasn’t been featured in the formal negotiations, geoengineering has been a significant sub-theme in Copenhagen—the subject of numerous side events (pdf), protests, and a documentary film screening. Robert Greene’s Owning the Weather, which aired here Sunday night in a venue off the spectacularly lit City Hall Square, paints the longstanding history of human attempts to control and modify the weather—through anything ranging from rain dances to quack cloud seeding efforts and hail cannon fusillades. The film ends with the observation that we are moving ever closer to making this ancient dream (or nightmare, if you prefer) a reality.

Indeed, scientists say there is little doubt that we could bring about an artificial planetary cooling by, say, seeding the Earth’s stratosphere with reflective particles, called sulfate aerosols, that would act as an artificial global parasol and cool us down. Such an act would amount to mimicking the climatic effects of a large volcanic eruption, such as the explosion of Mt. Pinatubo in the Philippines in 1991—whose 22 mile high stream of ash, subsequently dispersed across the globe, resulted in half a degree Celsius of global cooling over the course of the following year.

Granted, the unintended consequences of such an action (such as decreased global precipitation) might be significant. But, goes the thinking among some scientists, if we’re facing a climate catastrophe—if we’re really going to bake; if Greenland is really going to go—then wouldn’t a few side effects be worth it to maintain our fundamental way of life? And the less that is achieved in Copenhagen—the more agreements fall short of absolutely ruling out climate catastrophe by, say, returning global carbon dioxide concentrations to something like 350 parts per million—the more attractive geoengineering sounds, at least as a last resort.

Perhaps the most lamentable indication that geoengineering is going mainstream is the fact that political conservatives and contrarians have increasingly begun to embrace it as an alternative to the central project of COP 15—namely, halting and then decreasing global greenhouse gas emissions. Bjorn Lomborg, the Danish environmental contrarian and infamous author of The Skeptical Environmentalist, loves the idea. So do Steven Levitt and Stephen Dubner, authors of the bestselling SuperFreakonomics, whose chapter on how we can address global warming through geoengineering (rather than emissions cuts) has been eviscerated by environmentalists and some scientists due to its many inaccuracies and misrepresentations.

Meanwhile, at the other end of the spectrum, anti-geoengineering activists have begun raising hell in an attempt to stop this growing momentum in favor of climate tinkering, before it gets any stronger. They don’t trust scientific hubris; they abhor messing with nature. This movement centers on the Canada-based ETC Group ( it stands for “Etcetera”), whose head, Pat Mooney, opines in Owning the Weather that scientists are “warm, cuddly, and naive.”

However, the mainstream climate scientists who are willing to at least consider geoengineering as a possibility constantly emphasize that such measures should not be an alternative to greenhouse gas reductions—rather, they could serve as an additional safety valve. To that end, these scientists—like Jason Blackstock, a research scholar at the Vienna-based International Institute for Applied Systems Analysis who, along with the British Royal Society, helped to organize three geoengineering events (pdf) here in Copenhagen—support ongoing geoengineering research, so as to determine with more precision what various types of interventions might do to the planet.

At a panel discussion after the screening of Owning the Weather, Blackstock described geoengineering as “terrifying.” But as he quickly added, “scientists are not into this because of hubris, but because of fear.” Blackstock went on to make the case that there must be international regulations firmly in place before any rogue nation, or individual, attempts a geoengineering intervention of any significant scale.

Such regulations appear increasingly urgent, since government-funded geoengineering research is already underway, although not yet in the United States (so far as we know). The European Commission has launched a project to study “implications and risks associated with engineering solar radiation to limit climate change.” And the United Kingdom, through its Research Council’s Energy Program, will also be funding geoengineering studies.

And then, there’s the Russian Federation. Geoengineering ideas have a long history in Russia—and now, they appear to be moving to the next scientific level.

Although so far it has received little or no attention, the journal Russian Meteorology and Hydrology recently published a new kind of geoengineering study whose lead author is the journal’s editor, the prominent Russian scientist Yuri A. Izrael. Known for his opposition to the Kyoto Protocol, his skepticism of human-caused global warming, and his enthusiasm for geoengineering, Izrael also happens to be a top scientific adviser to Vladimir Putin. And now, his paper reports on what is probably the very first geoengineering field trial. Izrael and his team of scientists mounted aerosol generators on a helicopter and a car chassis, and proceeded to blast out particles at ground level and at heights of up to 200 meters. Then they attempted to measure just how much sunlight reaching the earth was reduced due to the aerosol plume.

This small-scale intervention was effective, the Russian scientists say. And in an accompanying article on geoengineering alternatives, Izrael and colleagues note that “Already in the near future, the technological possibilities of a full scale use of [aerosol-based geoengineering] will be studied.”

Up until now, scientists have largely studied the possibilities of geoengineering in relatively unthreatening computer models—not out in nature itself. They’ve just run a series of simulations to try to assess likely impacts. In this context, the apparent trajectory of Russian research sounds like something quite new. And it may prompt increasing calls for regulation of geoengineering interventions, even at the small scale research level where environmental consequences would be relatively minimal.

Indeed, last night in Copenhagen after the Owning the Weather screening, the prominent climate scientist Stephen Schneider of Stanford University remarked that if any country engages in a geoengineering initiative that affects the people or environment of another country, it could be considered an “act of war.”

It is important to bear in mind that weather modification schemes have long been closely tied to the military. In the Vietnam War, the US military tried to seed clouds in an attempt to flood the Ho Chi Minh trail and impair the operations of the Viet Cong. And none other than nuclear scientist and Ronald Reagan adviser Edward Teller—the model for “Dr. Strangelove”—was one of the early US geoengineering proponents.

If an international competition begins to advance farthest and fastest in geoengineering research for military reasons—premised on the idea that one might used weather or climate modification as a strategic weapon—that would likely render ongoing research classified, observes Blackstock. It would also surely lead to greater public backlash from organizations like the ETC. Group.

That’s the last thing scientists like Blackstock, who support ongoing public geoengineering research and dialogue, want to see. One thing is certain: Although a few years ago one might seriously make the argument that we shouldn’t even discuss the possibility of geoengineering—for doing so could weaken the case for quick and deep cuts in greenhouse gas emissions, and empower the Lomborgs, Levitts, and Dubners of the world—that idea just sounds ludicrous now. The public conversation about geoengineering is steadily growing; the scientific research on the topic is steadily increasing. There is no putting this idea back in the box.

Moreover, if it becomes increasingly clear that we can’t control global warming in any more sober way, it seems very likely that the pressure will mount, and mount, and mount, to have a backup plan in place. Blackstock uses the analogy of a car driving in fog and heading towards a precipice: It’s good to have ordinary brakes, but if those fail, you also want an emergency brake.

It’s an ingenious argument, but the degree to which it ultimately proves convincing may directly correlate with the degree to which COP15 or later efforts take the strongest measures possible to curb global warming. In particular, any further devastating climate impacts, particularly to vulnerable low-lying developing countries, may draw new calls for geoengineering research or interventions. And given the current state of deliberations in Copenhagen, that’s the scariest thing of all.

This story was reported by Chris Mooney of Discover as part of the Copenhagen News Collaborative, a cooperative project of several independent news organizations. Check out the constantly updated feed here. Mother Jones’ comprehensive Copenhagen coverage is here, and our special climate change package is here.