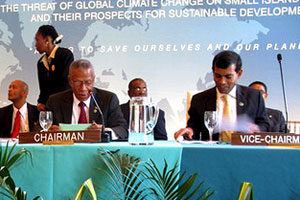 Big news from Copenhagen today, where the divide between big emitters and at-risk nations deepened, threatening the prospects of reaching a climate deal for president Obama and other heads of state to sign when they arrive at the summit next week.

In a day of major developments, the Alliance of Small Island Nations put forth a radically tougher proposal for confronting climate change than the US, China and other major emitters favor. The AOSIS proposal, which calls for temperature rise not to exceed 1.5 Celsius above pre-industrial levels, ran counter to a separate text released today by the chairmen of the summit that called for smaller but still significant cuts. Meanwhile, activists prepared for a worldwide day of demonstrations on Saturday that organizer Bill McKibben of 350.org said were “explicitly endorsing” the AOSIS proposal and would involve “millions of people” and 3,000 actions around the world.

“We are not backing 350 because it’s a beautiful number,” said diplomat Antonio Lima of Cape Verde, the vice president of AOSIS, referring to the alliance’s call to reduce the concentration of carbon dioxide in the atmosphere to 350 parts per million from today’s 389. “No, it is because of science,” he added. “Some of our members will disappear [beneath rising seas] if we go above 1.5 C.”

The rich-poor divide also reared its head on the all-important question of who will pay the bill for climate change.

Todd Stern, the Obama administration’s chief climate negotiator, said Thursday that he “categorically reject[s]” the suggestion that rich industrial countries owe compensation to the victims of climate change. Stern acknowledged that the emissions of rich nations over the past two hundred years of industrialization had caused global warming, telling a press conference, “We absolutely recognize our historic role in putting emissions in the atmosphere.” But, Stern added, “the sense of guilt or culpability or reparations–I just categorically reject that.”

Stern’s statement put him at odds not only with international law but with America’s European allies. European Union leaders announced in Brussels today that their governments would provide 7.2 billion Euros over the next three years to help poor nations adapt to sea level rise, drought and other intensifying impacts of climate change. The EU’s offer was in keeping with the provisions of the UN Framework Convention on Climate Change–the climate treaty President George H.W. Bush signed at the Earth Summit in 1992 and which the Copenhagen negotiations are seeking to extend. Nevertheless, it was quickly rejected by developing nations and aid agencies as grossly inadequate.

“We have talked about $100 billion a year,” ambassador Lima told The Nation, citing an estimate the World Bank has made for climate change adaptation by poor nations. “Now we are hearing about $10 billion for three years.”

“Worst of all, this money is not even new,” Tim Gore, the climate adviser to Oxfam EU, told the BBC. “It’s made up of a recycling of past promises and payments that have already been made.”

The emissions reductions included in the AOSIS proposal go far beyond what is currently on the table in Copenhagen. AOSIS calls for global emissions to peak “no later than 2015,” which aligns with statements made by IPCC Chair Ranjendra Pachauri. But AOSIS then demands that the US and other developed nations cut emissions by 45 percent (compared to 1990 levels) by 2020. Furthermore, global emissions, including from large developing countries such as China and India, are to fall at least 85 percent by 2050.

Noting that Pachauri, NASA scientist James Hansen and other experts have endorsed reducing carbon dioxide levels to 350 parts per million as soon as possible, McKibben hailed the AOSIS proposal as “the first truly rational attempt to grapple with what the science of climate change tells us.”

But the US, China and other big emitters are backing much smaller cuts. The EU has offered to cut its emissions by 20 percent from 1990 levels by 2020, and by 30 percent if other nations do the same. Japan has made a similar pledge, while the Obama administration, facing congressional resistance, has offered to cut by a mere 4 percent. China and India have said they will limit the growth of their emissions but that population growth and the need to fight poverty require absolute emissions to grow for years to come.

Thus the stage is set for a showdown in Copenhagen next week. Heads of state do not generally come to high-profile international negotiations like this one unless they expect to sign a deal. Poor and vulnerable nations are counting on global public pressure to compel the biggest emitters to go further, much further, than they have in mind.

“If we leave Copenhagen without a legally binding outcome and without very strong commitment on finance, how can we go in front of our children and tell them, We couldn’t reach [an agreement],” ambassador Lima told a roomful of young activists holding signs saying, “We stand with AOSIS.” That’s why we need the support of you, the youth,” he continued, “because you are the ones who are going to suffer if we don’t have a good result. And sometimes your governments will hear you when they do not hear us.”

This story was reported for The Nation as part of the Copenhagen News Collaborative, a cooperative project of several independent news organizations. Check out the constantly updated feed here. Mother Jones’ comprehensive Copenhagen coverage is here, and our special climate change package is here.