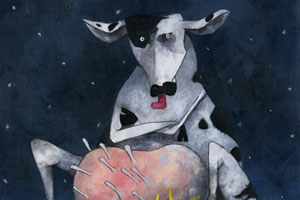 You’ve heard the rumors that the Pentagon engineered 9/11. You know about the folks who think Barack Obama wasn’t born in America. Last summer you learned every possible synonym for “death panel.” But have you heard the one about the cow tax? Unless you’re a farmer, probably not. This one goes back to the waning days of the Bush administration, when the EPA, after a long fight from environmentalists, grudgingly released a preliminary notice that outlined how the Clean Air Act could be used to control greenhouse gases. Buried deep in the document, on page 44,377 of that day’s Federal Register to be exact, was a comment from the USDA warning that if the proposed rules were applied to the ag sector—which generates CO2 emissions in many ways, from cow burps to soil tillage—”even very small” farms might be affected. The American Farm Bureau Federation leaped into action: DC bureaucrats were proposing a cow tax! It could cost producers as much as $175 for each dairy cow! Farmers freaked out.

The Bush administration, of course, had no intention of regulating greenhouse gases via the Clean Air Act, let alone applying any such regs to farms. Neither does the Obama administration, which never viewed the Clean Air Act as anything other than a vague fallback threat to help gain support for its own climate bill. But the lesson from the cow-tax uprising was clear anyway: Don’t ever, ever get crosswise with the ag lobby. They will sink you.

So when the Waxman-Markey climate bill was written, power plants were covered. Chemical factories were covered. Refineries were covered. But agriculture? Not covered. At all. Farms can emit greenhouse gases until sea levels have risen enough to give Iowans an ocean view and never pay a dime.

With agriculture fully exempt from emission caps, the farm lobby was happy. Right? Of course not. “It really has taken on a life of its own,” Farm Bureau lobbyist Rick Krause told the AP in June—modestly understating his own role in spreading the cow-tax meme in the first place. “This is something that people understand. All that we have to say is that [cows] are the next step with these proposed permit fees. And people are still talking about it.”

They are indeed. Because while most industries would be happy to win a total and unconditional victory, agriculture isn’t like most industries. They still had complaints, chief among them the fact that the bill would modestly raise the price of energy and chemicals in the future, and farmers buy energy and chemicals. Everyone else does too, of course, and that’s the whole point: Higher prices will provide an incentive to use less energy and fewer chemicals, reducing greenhouse gas emissions and slowing global warming.

But everyone else doesn’t have the power of the ag lobby behind them. “Farm Bureau” may sound rural and heartlandish, but in reality it’s a multibillion-dollar trade association cum insurance company with branches in all 50 states and close ties to agribusiness giants like Archer Daniels Midland and Novartis, not to mention a few dozen farm-state senators. With clout like that, shared sacrifice clearly isn’t an acceptable option, even in the service of fixing a problem that poses an enormous threat to farmers. (Global warming is projected to hit heartland states the hardest—and even small shifts in temperature can have disastrous consequences for crop yields.) And so, the lobby demanded compensation for those higher energy and chemical prices, even though they would mean only a tiny hit to farm incomes—1 percent at most for the next nine years, according to the USDA.

The compensation they got came via something called offsets. Under Waxman-Markey’s cap-and-trade provisions, you’d have to buy permits for the CO2 you emit, but you can reduce the number of permits you have to buy if you do things to reduce greenhouse gases. Some offsets are legitimate; some are smoke and mirrors. The way to support the former and weed out the latter is to have the EPA keep a close eye on things. But the ag lobby insisted that the farm-friendly USDA be put in charge of the offset program instead. Change the way you till the soil so that—maybe, possibly—less carbon is released, and voilà! You get a check. The USDA estimates that an average wheat farmer could make an extra $1,775 a year this way.

But that still wasn’t enough for the ag lobby. Next on their hit list was protection for ethanol. For years corn farmers have argued that ethanol has a lower carbon footprint than gasoline. It turns out that this isn’t true if you take into account the land-use changes that accompany ethanol production: The corn grown for ethanol displaces feed corn, which displaces soybean crops, which causes Brazilian farmers 6,000 miles away to make up the difference by growing more soybeans on their pastureland. This in turn displaces their cattle to new pastures created by clearcutting the rainforest, thus wiping out all of ethanol’s carbon benefits. The net effect, the EPA’s scientists have concluded, is that ethanol’s real carbon footprint is about the same as gasoline’s—or even worse.

The ag lobby’s response was simple and direct: They insisted that Waxman-Markey be changed to forbid federal agencies from considering indirect land-use changes when assessing the greenhouse gas footprint of ethanol. End of discussion.

The experts were agog. “This is not a close scientific call,” wrote Michael O’Hare, a public policy professor at UC-Berkeley who’s studied land-use issues extensively for the California Air Resources Board. “If we are willing to make stuff up and stifle the science with legislation like this, countries like India and China and the Europeans have no reason to get on board…It will be a catastrophe.”

In other words, by throwing their considerable weight around, the ag lobby can smash political crockery halfway across the world. But they have more subtle ways of showing their strength, too. Back in July, for example, Sen. Chuck Grassley (R-Iowa) put a hold on Thomas Shannon, President Obama’s nominee for ambassador to Brazil. There was no question about Shannon’s qualifications, only about his fealty to the corn lobby: In his confirmation hearings, Shannon had the gall to suggest that eliminating import tariffs on sugar-based ethanol (mostly from Brazil) might be “beneficial.” Which it would be, since sugar ethanol is both cheaper and more environmentally friendly than domestic corn ethanol.

But those are fighting words in the Corn Belt, and Grassley lifted his hold only after the White House rolled over and reassured him in writing that the ethanol tariff wouldn’t be touched. They understood the score: Don’t mess with the ag lobby. Not even a little bit.

In fairness, farmers have some arguments on their side. Regulating their greenhouse emissions is difficult, and exempting them is a defensible position. Some offsets are useful, and the USDA might turn out to do a good job of regulating them. The anti-land-use provision is scientifically shameless, but in practice it probably won’t have much effect since it sunsets after five years. Protective tariffs are in place for lots of things besides ethanol. And lobbyists in Washington have all lined up like pigs at a trough to get whatever goodies they can from the climate bill. What distinguishes the farm lobby is the chutzpah to go back after an unconditional victory and demand even more.