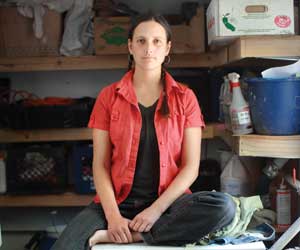 WHEN I MET Sandra Turnbull on a cloudless summer day, she hadn’t bathed in almost a week. Dirty laundry was piling up in the basement of her Oakland, California, home as she waited to run a full load in her high-efficiency washing machine. She’d let her back lawn go almost as yellow as the unflushed contents of her water-saving dual-flush toilet. In her living room, she served me a glass of water, half full; what I didn’t drink would join the gray water she was collecting in buckets and bowls in the shower and kitchen sink to put on her fruit trees. “That’s the way we save that little bit extra every day,” she said. On a good day, her family of four used around 110 gallons—less than a third of what a typical American household of the same size does. Yet the local water utility claimed they were still using too much.

Last July, the East Bay Municipal Utility District responded to the worst drought in more than a decade by ordering most of its residential customers to slash their water use by nearly one-fifth—regardless of how much they were already using. The most profligate could easily meet the goal by drenching their lawns less, but water misers like Turnbull were faced with either paying new fees, appealing their bills, or figuring out ways to conserve even more. At an EBMUD meeting, she joined dozens of angry customers to scold the utility for “penalizing people like us, who have been conserving all along, and rewarding water hogs.”

In recent decades, public awareness campaigns and rebates for water-efficient appliances have created a wave of voluntary water conservation across the West, helping forestall chronic shortages. But in the face of climate change, booming populations, and the collapse of rivers and deltas, the success of these conservation efforts has raised new questions about water conservation not just in California but across the country and the globe: During the dry years, what to ask of the most frugal customers? What to demand of the least? And most important, does it ever make sense to treat water like it’s a bottomless resource?

Composed of dense coastal cities, such as Berkeley and Oakland, as well as sprawling inland suburbs, San Francisco’s East Bay is one of the state’s most balkanized water districts. Split demographically, meteorologically, and politically, it is a perfect laboratory for the thirsty West’s squabbles. “You can see many parts of the state in our district,” says Andy Katz, who represents Berkeley and parts of Oakland on the EBMUD board. “So if we can figure this out, much of the state will be able to borrow from us.”

Long before most other water districts, EBMUD offered rebates for efficient toilets, handed out low-flow showerheads and garden nozzles, and ran ads exhorting customers to be a “water saving hero” by taking quick showers. It even gave customers “cash for grass” if they removed their lawns. (Lawns and gardens consume nearly a third of residential water in the United States.) Initially, these steps proved cheaper than building new dams or reservoirs. But lately, the bargain has evaporated; achieving the same water savings through incentives now costs up to 10 times more. In short, EBMUD has become a victim of both its success in motivating people like Turnbull and the continued reluctance of her suburban neighbors to close their spigots.

Typically, 25 percent of the East Bay’s inhabitants suck down 60 percent of its residential water. For this, they are charged as much as 50 percent more per gallon than the most efficient users. During the recent drought they were asked to use 20 percent less and got a rate increase along with everyone else. Yet EBMUD decided not to charge the super soakers any additional premiums, blunting the incentive to save even more. Some economists, however, say water utilities can afford to charge their heaviest users far more. “There is no water shortage,” says David Zetland, a water policy researcher at the University of California-Berkeley. “We’re just doing the worst job in the world trying to allocate it. If you go down to a bar and Corona costs 12 cents a bottle, you’re gonna run out of Corona. And that’s the problem with water: It’s just too damn cheap to care about.” Even in Southern California’s Irvine Ranch Water District, which sells water to its most frugal customers at below cost but slaps an additional 840 percent charge on the biggest users, 200 gallons at the top rate still cost less than a Frappuccino.

Breaking the addiction to cheap water can be tough. Less than half of California’s water districts use tiered pricing. During the last big drought, in 1991, when EBMUD hiked its rates for customers who used more than 250 gallons per day, irate homeowners refused to pay their bills and four inland suburbs sued. The utility relented. “One part of the district was subsidizing another, and fundamentally that’s not fair,” says John Coleman, vice president of the EBMUD board, sounding like a ticked-off conservationist—except that he’s defending the users who couldn’t bear to see their lawns die.

In the absence of a concerted, coherent movement to conserve water, saving remains largely an individual affair, led by activists such as “Greywater Guerrilla” Laura Allen. Her five-person house in Oakland is surrounded by a lush fruit and vegetable garden, yet typically uses less than 100 gallons of water a day. She accomplishes this feat with an illegal maze of pipes that drains her sinks, shower, and washing machine into her garden. When I dropped by to see the setup, I peed in her composting toilet, and a few days later she used my nitrogen-rich tinkle to water her almond tree. (See “Trickle-Down Theory.”) This type of water recycling could slash water use, yet the state’s permitting process is so onerous that only three gray-water systems have been approved in the East Bay.

Unable to wring more savings from the sippers and afraid to upset the slurpers, EBMUD is now falling back on the strategy it had long avoided: pumping itself out of trouble. If next summer is dry, it will take as much as an additional 100 million gallons a day from the Sacramento River, where low flows have decimated delta smelt and endangered salmon—which could further add to the woes of farmers trying to save water. (See “What’s Your Water Footprint.”) It’s talking about building an energy-intensive desalinization project and raising its dam in the Sierra foothills. Ironically, economists say, the high cost of these projects will simply create what they’re meant to avoid: more expensive water.

By early this year, water use in the East Bay had dropped only 11 percent—well short of EBMUD’s goal. Then a burst of rain refilled its reservoirs, postponing any politically painful rate hikes for its biggest water users—at least for now.

In the meantime, Sandra Turnbull sees little reason to cut back and further subsidize “the big wasters.” A few days after I met her, she noticed that the leaves of her backyard apple tree were beginning to curl. She grabbed four jugs of water from a stash she kept as an emergency earthquake supply, watered the tree, and then refilled them. “It felt like a necessity,” she said. “I’m not feeling guilty at all.”