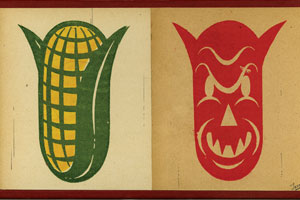 If the specter of obesity and diabetes wasn’t enough to turn you off high-fructose corn syrup (HFCS), try this: New research suggests that the sweetener could be tainted with mercury, putting millions of children at risk for developmental problems.

In 2004, Renee Dufault, an environmental health researcher at the Food and Drug Administration (FDA), stumbled upon an obscure Environmental Protection Agency report on chemical plants’ mercury emissions. Some chemical companies, she learned, make lye by pumping salt through large vats of mercury. Since lye is a key ingredient in making HFCS (it’s used to separate corn starch from the kernel), Dufault wondered if mercury might be getting into the ubiquitous sweetener that makes up 1 out of every 10 calories Americans eat.

Dufault sent HFCS samples from three manufacturers that used lye to labs at the University of California-Davis and the National Institute of Standards and Technology. The labs found mercury in most of the samples. In September 2005, Dufault presented her findings to the FDA’s center for food safety. She was surprised by what happened next. “I was instructed not to do any more investigation,” she recalls. FDA spokeswoman Stephanie Kwisnek says that the agency decided against further investigation because it wasn’t convinced “that there was any evidence of a risk.”

At first, Dufault was reluctant to pursue the matter. But eventually, she became frustrated enough to try to publish the findings herself. She had her 20 original samples retested; mercury was found in nearly half of them. In January, Dufault and her coauthors—eight scientists from various universities and medical centers—published the findings in the peer-reviewed journal Environmental Health. Although they weren’t able to determine what type of mercury was present, they concluded that if it was organic, the most dangerous form, then based on average HFCS consumption, individuals could be ingesting as much as 200 micrograms of the neurotoxin per week—three times more than the amount the FDA deems safe for children, pregnant women, women who plan to become pregnant, and nursing mothers.

But the FDA and the Corn Refiners Association, an industry trade group, claim there’s nothing to worry about. The group hired ChemRisk, the consulting firm whose scientists testified on behalf of a polluting utility in the lawsuit portrayed in Erin Brockovich, to analyze Dufault’s report. ChemRisk criticized Dufault for not specifying the type of mercury her tests had found. This, the consultants said, was key, since mercury poses different risks depending on its chemical form. In its unadulterated elemental state, mercury is relatively safe to ingest—the body absorbs only about a tenth of a percent of it. Inorganic forms of mercury, such as cinnabar, are more easily absorbed and therefore more dangerous than elemental. Organic forms, like methylmercury, which originate from fossil-fuel emissions and build up in the fatty tissue of tuna and other kinds of fish, are the worst; readily absorbed, they can cumulatively damage the brain and nervous system.

Though it provides no scientific evidence to back up this assertion, the FDA says that the mercury in Dufault’s HFCS samples is elemental. But the lab that analyzed the samples believes there’s a good chance the mercury is organic. The analysts “said in so many words, ‘It doesn’t look like inorganic,'” says Peter Green, Dufault’s UC-Davis colleague who coordinated with the lab. “They would even say it’s more likely not the regular elemental mercury.”

The corn-syrup industry claims that no HFCS manufacturers currently use mercury-grade lye, though it concedes some used to. (According to the EPA, four plants still use the technology.) It says that its own tests found no traces of mercury in HFCS samples from US manufacturers, including a number of samples from some of the same sources Dufault tested. But hundreds of foreign plants still use mercury to make lye—which may then be used to make foods for export. Already, 11 percent of the sweeteners and candy on the US market are imported.

At around the same time that she published her study, Dufault also learned of a report issued by the Minnesota-based Institute for Agriculture and Trade Policy, which found low levels of mercury in 16 common food products, including certain brands of kid-favored foods, like grape jelly and chocolate milk. Researchers haven’t proven that the mercury in the foods came from HFCS, but internist Jane Hightower, who coauthored the Environmental Health study, points out that it ultimately doesn’t matter how it got there: The FDA has allegedly known about the mercury-contaminated hfcs for nearly four years and “should already have an answer for us based on science and not speculation,” she says. The agency says it has no plans for further testing unless additional evidence of harm emerges in outside scientific literature. But the issue has been getting some attention in Congress—a bill proposed in April would require plants that once employed the technology to report how much mercury they used.

Dufault retired from the FDA in January 2008, after the agency began taking her off her field projects. “All of a sudden, they wanted me to sit in the office,” she says. She moved to Hawaii, but she hasn’t exactly been lounging on the beach. She recently finished a paper, currently in the peer-review process, that explores why children and fetuses are more sensitive to mercury than adults. She also teaches second- and third-graders with learning disabilities. “I worked for an organization that allowed stuff to go on that probably impacted these children,” she says. “I look at this as doing penance.”