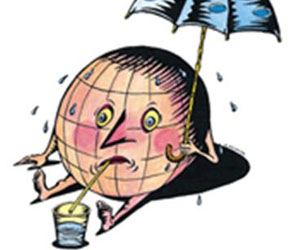 Photo used under a Creative Commons license by flickr user <a href="http://www.flickr.com/photos/mikecogh/">mikecogh</a>

On Monday, the Waxman-Markey climate bill moved to the Senate floor after narrowly passing the House. It’s a step, yes—but as everyone knows, cooling the planet will require a lot more than closing an emissions deal. That’s why earlier this month the august National Academy of Sciences (NAS) brought together in Washington, DC, leading scientists, economists, policy experts, philosophers, and a menagerie of other experts for a two-day workshop to discuss a crazy-sounding idea: Should the US consider geoengineering the planet’s atmosphere to combat global warming?

Once a fringe theory, in recent years the idea that humans can change the Earth’s climate through direct intervention has begun to gain credibility in climate change discussions. To be fair, the scientific community’s hand is forced: Despite ongoing efforts to curb emissions levels and slow the planet’s warming, the warning signs are clearer than ever. Natural disasters abound. Entire regions may be rendered inhabitable. Mass extinction looms on the horizon. Geoengineering proposals have, by necessity, moved from the world of science fiction to potential technology and policy.

The ways by which scientists propose to directly engineer the Earth’s environment to slow the Earth’s warming are myriad. Ideas range from injecting aerosols into the atmosphere via fighter jets to reduce solar radiation, to fertilizing the oceans with iron to grow algae blooms that absorb more carbon dioxide, to sending millions of small mirrors or “sun shades” into the Earth’s orbit to scatter the sun’s light away from the planet and back out into space. And these are but a few of the suggestions now surfacing in scientific circles.

The revived interest in geoengineering is relatively new. In 2006, a Nobel Prize-winning chemist named Paul J. Crutzen reignited the geoengineering debate with an article in the journal Climatic Change calling for more research into whether geoengineering could potentially slow the Earth’s increasing temperatures. Since then, scientific publications have devoted entire issues to debates on geoengineering’s merits, think tanks have hosted events on the topic, and international climate change conferences have mentioned geoengineering proposals in their proceedings.

Even John Holdren, chief science adviser to President Barack Obama, has mentioned ?geoengineering as a possible option. A geoengineering skeptic, Holdren told the Associated Press in April that geoengineering had been informally discussed by administration officials as an option to combating climate change. “It’s got to be looked at,” Holdren said. “We don’t have the luxury of ruling any approach off the table.”

The idea of deliberately engineering the climate predates the idea of global warming by more than a century. As early as the 1830s, when an American meteorologist named J.P. Espy proposed (PDF) igniting enormous fires to affect the frequency and intensity of precipitation, scientists have thought about how to tinker with the planet’s thermostat. (In literature, climate modification schemes appear in classics like Homer’s The Odyssey and, more prominently, in Shakespeare’s “The Tempest.”) Since then, geoengineering schemes have ranged from the realistic—Energy Secretary Steven Chu advocated painting the roofs of buildings white to reduce absorption of solar radiation—to the more quixotic, like synthetic trees that “scrub” or remove CO2 from the air, or “space elevators” that transport aerosols into the stratosphere from the planet’s surface.

One of the more widely discussed geoengineering schemes is what’s often called “solar radiation management.” In it, aerosol particles are injected into the stratosphere—the second major layer of the Earth’s atmosphere—to increase the stratosphere’s reflectivity. In theory, this increased reflectivity would reduce the amount of solar radiation that reaches the planet’s surface and is trapped there by greenhouse gases—which is, of course, the primary cause of global warming. Less radiation, then, could slow rising temperatures.

Crutzen, whose 2006 Climatic Change article discussed solar radiation, likened this kind of geoengineering to a volcanic eruption. For instance, the eruption of Mount Pinatubo in 1991 launched millions of tons of sulfur dioxide into the stratosphere. All that sulfur floating around the stratosphere actually led to a decrease in temperature of, on average, by 0.5 degrees Celsius near Mount Pinatubo in the year following the volcano’s eruption. Indeed, “volcanic eruptions serve as a nice analog” to sulfate aerosol injections, says Alan Robock, a Rutgers University meteorologist and leading geoengineering researcher.

Of course, geoengineering researchers cannot sit idly by waiting for the next volcanic eruption to test their theories. In Robock’s case, climate models serve that purpose at NASA’s Goddard Institute for Space Studies. When it comes to the actual injection of sulfur particles into the atmosphere, Robock and other scientists suggest a number of options. Small jet-fighter planes streaking through the stratosphere could release sulfur carried in the cargo space of the aircraft. Plastic or rubber weather balloons could be launched transporting sulfur particles into the stratosphere. Some scientists have even proposed blasting the particles into the atmosphere with military-grade artillery guns.

Compared to the cost of, say, the US government’s nearly $13 trillion bailout of the financial sector, the estimated costs of geoengineering aren’t all that much. Robock and a group of other scientists wrote in Maythat the millions of tons of sulfur needed each year, equipment (jet planes, balloons, artillery rifles, etc.), and deployment methods needed for solar radiation management by sulfate injections would cost (PDF) somewhere near tens of billions of dollars—a drop in the bucket compared to the international gross domestic product.

What’s unclear with most geoengineering proposals is whether the social and environmental benefits outweigh the potential risks. Writing in the Bulletin of the Atomic Scientists in the summer of 2008, Robock listed (PDF) a number of different reasons why geoengineering could be a bad idea at this point. From an environmental standpoint, geoengineering could deplete ozone worldwide due to increased amounts of aerosol particles in the atmosphere. It could stifle the push for solar power by decreasing the amount of sunlight reaching the Earth’s surface. Precipitation levels could drop off, creating massive droughts in affected areas. And if geoengineering were begun but then halted mid-deployment, Robock predicts that a period of rapid warming would occur—like a catch-up period—putting far more stress on the environment than the gradual warming seen now.

Then there are the political, moral, and ethical consequences of deliberately modifying the climate through geoengineering. After all, the Earth is a global commons, shared by all plants and animals and countries and their citizens. How can anyone or anything claim authority over the planet’s thermostat? As Robock asks in the Bulletin, “What if Russia wants it a couple of degrees warmer and India a couple of degrees cooler?…Would it be possible to tailor the climate of each region of the planet independently without affecting the others?”

One of the most outspoken scientists on this subject is Stanford University climatologist Stephen H. Schneider. An elder statesman in climate change circles, Schneider has consulted with six different US presidential administrations and written about the consequences of geoengineering for more than 30 years. Before any large-scale geoengineering testing or deployment, Schneider says, an international consensus or treaty must be in place comparable to the Kyoto Protocol. “It should be illegal for anybody to do any [geoengineering] experiments that aren’t internationally sanctioned,” he says. “Otherwise, what you end up doing is you end up creating the possibility of very serious conflict. Some people could even consider it an act of war.”

One way to build international consensus on geoengineering could be focusing it on one specific region—say, the polar caps. In the Arctic, one of the regions most visibly impacted ?by global warming, it would be much easier to agree to test geoengineering to see if it would work in counteracting global warming, says Michael MacCracken, the chief scientist for climate change programs at the Climate Institute in Washington, DC. “Keeping the Arctic cold, I mean, basically everybody would love to do that,” MacCracken says.

Because there’s little to no direct sunlight during an Arctic winter, an aerosol injection scheme would only be deployed during daylight months, reducing the potential risks in geoengineering. “Maybe you want to figure out over the globe that you want to do it only in certain seasons or at certain latitudes or you don’t do it in the Western Hemisphere,” MacCracken says. “There’s been virtually no exploration of what the options are and possibilities are.”

Despite the difference of those involved, the recent NAS meeting illustrated that many scientists and experts interested in geoengineering agree on one point: We need far more geoengineering research. Little, if any, actual field-testing has occurred so far, and for good reason. The underlying theoretical testing has a ways to go before physical experiments can begin.

One noteworthy topic at the NAS event was the possibility of a federal, centralized geoengineering research program. Such a program was proposed under the Bush administration in 2001, but never saw the light of day. Right now, geoengineering research is more scattershot, with various scientists spread throughout the country and the world using their own grant money from organizations like the National Science Foundation or NASA to run climate models and test their theories. “Most of what’s been done has either been done on the edge of other projects or if there was some program manager who’s approved a single grant proposal,” says Ken Caldeira, a leading geoengineering researcher at the Carnegie Institution For Science in Palo Alto, California. A federal research initiative, however, would signal the US’s intent to thoroughly study geoengineering and decide whether the benefits outweighed the risks and potential costs. Robock says the NAS workshop could be a springboard for such a federal research program. “What I hope comes out of [the NAS workshop],” he says, “is a consensus to research and answer many of the unknowns so policymakers have enough information to make decisions to see if this is a crazy idea or something we should consider seriously.”

The worst-case scenario would be to ignore geoengineering now, then have to put an untested theory to use later. Better now, scientists contend, to investigate whether geoengineering could work as a potential Plan B should mitigation prove not enough to prevent catastrophe. “If some degree of warming becomes widely viewed as intolerable, and we are going to surpass that amount of warming, then there’s no option other than direct intervention in the climate system,” Caldeira says. “But it’s a bit like getting your kidney removed. It’s not something you look at with joy—’Oh, I’m going to get my kidney removed’—but it’s better than dying.