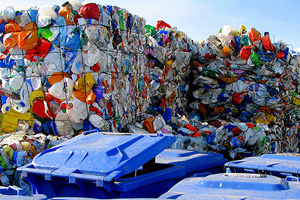 The modern recycling movement got its start alongside the first Earth Day, nearly 40 years ago. In the months surrounding April 22, 1970, around 3,000 voluntary recycling programs sprung up around the country, started mostly by counterculture types looking for a practical, virtuous way to minimize their environmental impact. Since then, recycling’s gone mainstream: Americans now recycle and compost a third of their trash, up from just 6 percent in 1970. Yet even as we load up our recycling bins, we’re generating more waste than ever before. In just 5 minutes, we use another 1,060,000 aluminum cans, 2 million plastic bottles, and 15 million sheets of paper. We’re still drowning in plastic, New York recycles only a fifth of its garbage, and trash haulers still find landfill more profitable than recycling. Then consider that municipal solid waste—that’s the stuff that fills our home garbage cans and office paper bins—is just 2.5 percent of our total “Gross National Trash” output. While we’ve been agonizing over whether our plastic yogurt lids can be recycled, have we been missing the big picture? Is recycling giving us a false sense that we’re solving our waste problem?

We put that question to four experts: Elizabeth Royte, Eric Lombardi, Annie Leonard, and Susan Strasser. Check out their answers below. Then post your comments or questions for them. For the rest of this week, they’ll be checking in to respond to readers, discuss and debate the future of recycling and waste, and perhaps even solve the mystery of the yogurt lid.

Elizabeth Royte is the author of Bottlemania: How Water Went On Sale and Why We Bought It and Garbage Land: On the Secret Trail of Trash. Her article on zero-waste zealots appears in the current issue of Mother Jones.

Yes, I think that people feel they’re doing their part for the environment by putting recyclables into containers at the curb or bringing them to a drop-off center (and they are helping the earth). But that feeling also allows some to continue business as usual—to consume and waste ever more stuff: “I recycle those single-use plastic bottles, so it’s okay to keep buying them.” We need to re-emphasize the other R’s: Reducing consumption of new goods and reusing what you’ve already got. We need to reconsider, also, how much local governments and taxpayers are willing to pay to deal with product waste. Getting manufacturers or brand owners to take responsibility for their products’ end of life would relieve some of that burden—and give those manufacturers a strong incentive to redesign goods to last longer, to contain fewer hazardous materials, and to more easily come apart for remanufacture or recycling. A couple of examples of “producer responsibility” already in place: computer take-back programs and bottle bills.

Eric Lombardi is the executive director of Eco-Cycle, one of the nation’s largest nonprofit recyclers. He is a cofounder of the GrassRoots Recycling Network and the Zero Waste International Alliance.

Recycling is a bit of a pacifier for a young nation, but that perspective is also a narrow one. In the bigger picture, recycling is like a gateway drug in that it is the first environmental action of every good Republican. I think the recycling stage is a very large one, and those of us who work on it have unlimited opportunities to create stories, presentations, and visions about all sorts of important environmental issues, including “game-changing ideas” like zero waste, zero carbon, and zero population growth. Add to that the fact that recycling is one of those real activities we can do every day that is good and virtuous, and what you end up with is a wonderful, visceral connection between message, action, and vision.

I agree with the view that if recycling is all you’re doing, then it’s a bad joke. But I would add that I don’t believe people stop at just recycling, and that if you believe that then you’re just looking for a justification for your own cynicism. Over the last 20 years I have watched a widespread green consciousness emerge and sweep over our culture, and I believe that the recycling revolution had everything to do with that.

Annie Leonard is an environmental researcher and campaigner. She is also the author and host of The Story of Stuff, an animated online exposé of the hidden costs of consumption.

There is a reason that recycling comes last in the oft-repeated mantra of “reduce, reuse, recycle.” That is where it should be: a last resort. Recycling is what we do with something when our back is against the wall, when we have exhausted all opportunities to redesign the product to be more durable, to reuse or repair it, or to simply do without it altogether. As a last resort, recycling is better than landfill or incineration for sure. And hats off to those dedicated people who have built and voraciously defended the recycling infrastructure that does exist in this country. But let’s be clear about what recycling is. My friend Paul Connett says that recycling is an admission of failure. I say that recycling is the opiate of the masses. It makes us feel good, like we’ve done our part.

I spent last week chaperoning my daughter’s fourth-grade class trip to an outdoor environmental school in the Sierra Mountains. At the end of our stay there, the kids were asked to think of things they could do in their lives to help the periled planet. The overwhelming majority cheered: “Recycle!” Look, globally we’re using 1.4 planets worth of resources each year. Fisheries are collapsing, aquifers are drying up, the climate is in chaos, more than 100 species a day become extinct. Putting our bottles and paper in a blue bin just won’t cut it. That doesn’t mean we shouldn’t do it, but let’s get over all the hoopla about it. Yes, recycle. Of course, recycle. But don’t believe for a second that recycling, alone, is enough to turn things around.

Susan Strasser is a professor of history at the University of Delaware and the author of Waste and Want: A Social History of Trash. She has been praised by The New Yorker for “retrieving what history discards: the taken-for-granted minutiae of everyday life.”

Americans have sorted trash for recycling for centuries. Old rags were once made into paper, bones into fertilizer; peddlers and general stores collected these and other recyclable materials from households and sold them to factories. During the first years of municipal solid waste collection, cities required residents to sort out materials that could be recycled—paper and bottles then as now, but also ashes and organic garbage.

These practices were forgotten during the mid-twentieth century, and in recent years, sorting trash for recycling has become a symbol of care about the environment. To call it a symbol is not to diminish its significance. Recycling provides a limited contribution to solving a problem that is more about consumption than about trash. But it reminds us of the threads that bind our individual households to the planet and the activities of our daily lives to its future.