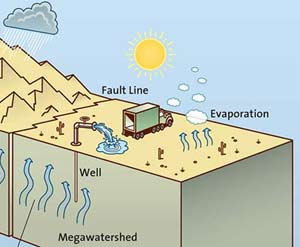 Spend any time with Robert Bisson, and conversation will eventually turn to the tiny island of Tobago. Bisson loves the place, and with the enthusiasm of a travel agent raves of its friendly people, its pristine beaches, and its lush tropical rain forest. But the real source of his boosterism runs deeper, down to the bedrock that underlies the tourist haven. There, a few years ago, Bisson demonstrated a discovery that he claims has the potential to solve the looming global water crisis—which according to the UN could leave 2.7 billion people facing severe shortages by 2025—by bringing forth a steady flow of untapped freshwater from the geologic depths. 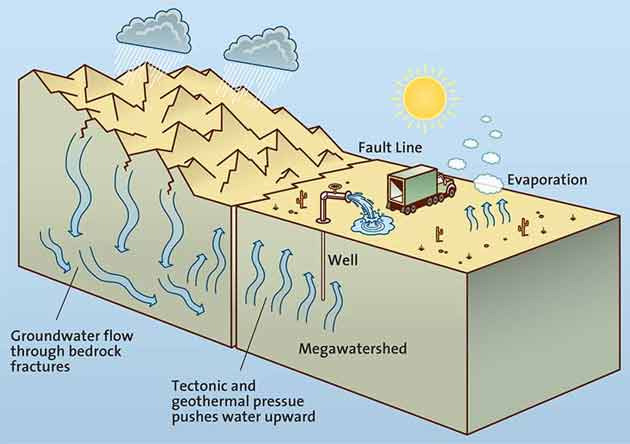 Not everyone agrees with his grandiose claims. Bisson is a controversial figure who has transferred his experience scouring the earth for oil and minerals to the field of hydrology. His unorthodox theories on the volume and dynamics of the world’s freshwater supply go against the scientific current. Even so, Bisson has confounded his critics, who can’t deny that he has an unnatural knack for finding water—hundreds of millions of gallons of it—in places where none was thought to exist.

Such was the case with Tobago, a 120-square-mile sliver of land in the southern Caribbean. By the summer of 1999, a historic drought had nearly exhausted the island’s supply of freshwater. Hotels ran dry, turning on their pipes only a few hours a day. A new, $100 million Hilton resort sat empty for about six months as its owners debated whether to install a desalination plant. That June, a European firm, commissioned by the island’s government to survey groundwater reserves, reported that no significant sources existed. Instead, it recommended damming a local river to create a reservoir—a major infrastructure project that would have cost an estimated $60 million and taken up to eight years to complete. In desperation, the government turned to Bisson, whose Virginia-based EarthWater Technology International (now called EarthWater Global) drilled a series of wells deep into the underlying bedrock. Within a year, at a cost of less than $20 million, the wells were drawing 5 million gallons a day of previously undiscovered groundwater, with the possibility of upping the sustainable yield to a daily 50 million gallons—10 times what the dam had been expected to produce. Eight years on, the wells are still flowing at capacity.

At the root of Tobago’s success, says Bisson, is the presence of what he calls a “megawatershed.” He coined the term himself, and for the last several decades has been leading a crusade for broader acceptance of his idea, one that he claims could revolutionize how the world thinks about water. According to Bisson, far more precipitation falls at high altitudes than most hydrologists have been able to measure. It then seeps deep into the ground, penetrating the fractured bedrock along fault systems where it streams through fissures in the rock, sometimes for hundreds or even thousands of miles. Contrary to what most scientists believe, Bisson says, many of the most drought-prone places on earth—Africa, the Middle East, and Central Asia—actually sit atop a constantly recharging supply of freshwater. All we need to do is drill for it.

On a hot day in July, I met Bisson at his office on a leafy, cobblestoned street in Alexandria. A short man with a gray mustache and the weathered face of an outdoorsman, he sat in a chair of finely carved wood near a fireplace while his dog, a white teacup Maltese named Lexi, sniffed at my leg.

In some ways, Bisson doesn’t seem the type to lead a global water revolution. For one thing, in a field dominated by PhDs, he has only about four years of college, spread across seven universities, and never earned an undergraduate degree. He considers it a badge of honor. Above all, Bisson thinks of himself as an explorer. He’s a fellow at the elite Explorers Club in New York City, and when we met he pointed to the window and said with a smile, “Exploration is out there, not in here.”

Born in 1946 in Laconia, New Hampshire, Bisson took an early interest in underwater exploration. By the mid-1960s he had joined Jacques Cousteau’s crew in the Mediterranean. He later got into the oil, natural gas, and mineral exploration business, founding his own company, bci-Geonetics, in 1972. It was then, while drilling for minerals, that he began to encounter groundwater in fractured bedrock. “Virtually everyone on the planet who’s looking for economic minerals, oil, and gas has found tons of freshwater in places where it shouldn’t be according to what they learned in school,” he explains. Puzzled at the sheer volume of water he was finding, Bisson built some test wells and began pumping them. “It kept on coming. When you stop pumping, the water’s at about the same level,” he says, an indication that new water was flowing in. But from where?

What Bisson believes to be the answer occurred to him in 1987, while he was exploring for groundwater on a usaid contract in Sudan. “The eureka moment was when I realized that the Great Rift systems of East Africa”—a 4,000-mile fault zone spanning from Jordan to Mozambique—”were leading to regional collection and transmission of water, not by a few miles, not just going outside a few local boundaries, but going hundreds or even thousands of miles all over these vast desert terrains of East Africa.” Bisson was unable to continue drilling in Sudan due to the country’s political instability, but since then has conducted groundwater surveys all over the world. In the places his megawatershed wells have gone online—including Seabrook, New Hampshire, Somalia, Tobago, and Trinidad—groundwater has flowed from previously undiscovered sources. More contracts are pending in South America, Asia, Africa, and the Middle East. Bisson now talks of augmenting the world’s freshwater supply 100 times over, effectively ending the global water shortage and, by extension, improving the health, economics, and security of nations around the world. Best of all, he says, drilling for water is cheaper, more sustainable, and more environmentally friendly than alternatives like desalination plants and dams.

There’s one problem, though: As Bisson freely admits, most hydrologists think his megawatershed theory is unproven, if not dead wrong. The debate centers on whether wells drawing groundwater from deep, fractured bedrock are accessing a renewable flow of freshwater, or just stagnant pools that will ultimately run dry for lack of recharge. The latter is known as “fossil water,” and the current scientific consensus is that Bisson’s megawatersheds are brimming with it. “It’s very unlikely that the volumes of water he argues are in these megawatersheds can actually be coming from renewable resources,” says Peter Gleick, a water expert and president of the Pacific Institute, a sustainability think tank. Bill Alley, chief of the US Geological Survey’s Office of Ground Water, labels the term “megawatershed” as “an advertising scheme…There are some very large groundwater resources around the world that are being tapped and used, but a lot of them are in arid or semiarid areas that were recharged during a different climate period. They’re effectively nonrenewable.”

Even Claude Cormier, a groundwater specialist who worked with Bisson briefly on the Tobago project, steers clear of using the term “megawatershed.” But with regard to Bisson’s groundwater wells in Tobago, he says, “I guess the proof is in the pudding there.” Utam Maharaj, the former director of water resources at the Water and Sewerage Company of Trinidad and Tobago, which contracted Bisson’s firm to explore for water, says that the projects “had dramatic impacts on the water needs of both islands,” and characterizes Bisson’s methods as “totally revolutionary.”

Bisson acknowledges that “there are challenges to be met if one is going to be exploring for something that (a) no one believes exists, (b) they believe exists, but only as fossil water, not replenished, and (c) challenges the entrenched interests that make so much money off of capital works.” But as time goes on, he remains convinced that opposition to his idea will fade. “It’s like cold fusion,” he tells me. “If somebody actually does it in the laboratory and it stands up to scrutiny, and if someone is able to do it in another laboratory, then you’ll have General Electric doing it. That’s what I’m hoping for. This is one of those things where you contribute something that starts as a footnote in history and maybe grows into a page, then a chapter.”