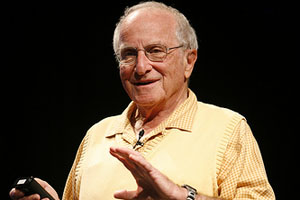 Photo is used under a Creative Commons license by flickr user <a href="http://www.flickr.com/photos/poptech2006/">Pop!Tech</a>

Mother Jones: I’m interested in your manual irrigation pumps. I wanted to hear a little bit from you on exactly how these work.

Paul Polak: IDE [International Development Enterprises] is the organization that I started, and it basically pioneered treadle pumps 25 years ago and has sold 2.1 million of them. There are probably 2.5 million altogether in the world today. A treadle pump is a way of translating human power into lifting water. It works sort of like a Stairmaster in a gym. A person just steps on treadles. These are usually bamboo, but they can be made of metal or other materials.

MJ: So it goes down into the water source that naturally exists under the ground…

PP: Right, and [it’s] just like in the old days in this country [when] we used to have hand pumps. This operates just like a hand pump, only a hand pump can have its pumping mechanism down pretty deep. Here, the pumping mechanism is on the surface and it just sucks the water. So in an area where the water table is pretty shallow, you can lift a lot of water and use it to irrigate a quarter-acre or a half-acre. The human work pumps more water the shallower it is, because it’s less work. At these shallow levels, Bangladeshi farmers used a treadle pump to irrigate a half-acre of vegetables. With that they cleared an extra $100 to $500 a year. And these are people who are earning $300 a year now.

PP: It’s huge. So that treadle pump is one of the examples of how very low-cost water control increases the income of poor farmers. If you’re going to design farm tools for these very poor people, you have to get the price down and the income up to the point where you get three times your money back in the first year. We’ve been able to do that with all kinds of tools for farmers and IDE, the organization that I started that popularized these treadle pumps. And then a whole bunch of other organizations got interested, and that’s great. So now if you take Bangladesh as an example, in Bangladesh we energized—all of this goes through the private sector, so the private sector in Bangladesh sold 1.5 million treadle pumps. If you multiply that by $100 in income, although some farmers made more, that’s $150 million a year in new income for every poor person. And you multiply that by $25, the investment, and that’s about $37 million that they invested for an income of $300 a year, or a dollar a day. And the total cost to IDE as an organization, which was involved in the design and the mass marketing to the private sector, was something like $12 to $15 million over 15 years. So you invest $12 million to get the market going, farmers invest $37 million, and they end up earning $150 million a year in new income forever, and that’s net income. So that’s the kind of power you can have from these simple tools. Now, in Africa, treadle pumps cost more. Everything costs more in Africa, and they also earn more income, but we’ve been trying to get the cost of treadle pumps down.

MJ: When did you start marketing these pumps in Bangladesh [where they were first introduced]?

MJ: And did they immediately then have that return on the investment? You say there have been 1.5 million treadle pumps since the program started.

PP: Right, and now the economic benefits I’m counting assume $100 a year in new income, but as we learn more about it, it got closer to $500. So that’s a conservative number, but, yeah, right from the beginning treadle pumps started making on average at least $100 a year in new net income on a farmer’s investment of $25.

PP: Yeah, and you have some farmers who make $1,000 and more, but that depends on—water is probably the most critical constraint, but as we went along with treadle pumps and people were earning $100, we found that one-fifth of the farmers were earning $500. One of the things I do is talk a lot to farmers and learn from them, and so we talked to the farmers who were making $500 and asked them how the heck they could make $500 when most of the people were only making $100. And the answer is they were more market savvy. So if they were growing cabbages, they would grow their cabbages to hit the market three weeks early and get twice the price. And instead of growing one crop—which is pretty risky, because you never know if farmers are going to overgrow it, because then it’ll be worthless—they grew diversified crops, at least four or five. So that lowers the risk and increases the probability that one of them will make a real good profit. And then they used better-quality seeds. And they really were in touch with the market, so they knew what the market wanted, and they would change their crops depending on changes in the market. They used much better fertilizer strategies and had more effective ways of recognizing pests and diseases and dealing with them. So all we did was take what we learned from those $500 farmers and applied it to everybody. So that’s what IDE does with the small farmers.

MJ: Have you gone to other places in Asia?

PP: I started IDE, and it grew to an international organization with 550 full-time staff. Of those 550, 13 are in the headquarters in Denver, and the rest are all in the field, and they’re local people. We expanded then from Bangladesh. We’re in India, Nepal, Vietnam, Cambodia, Myanmar, Zambia, Zimbabwe, Ethiopia.

MJ: In these other countries, is it the same kind of return?

PP: The farmers told us very clearly that one of the most important things they needed was affordable water, but that has expanded into 13 different affordable irrigation tools. You can classify them according to water lifting, water storage, and water distribution. IDE recently received some support from the Bill & Melinda Gates Foundation to finalize these 13 technologies, because they’re important all over the world.

MJ: So the irrigation system is an example of more efficient distribution.

PP: Irrigation simply means bringing water to plants. And so irrigation includes lifting the water, bringing it to the plants, and storing it.

MJ: You said you had an irrigation system that costs $3 with a return of $10. Where have you introduced those?

PP: It’s very popular in India and Nepal. We’re introducing it in Myanmar, and it has a huge application all over Africa.

MJ: Before you had these pumps, what kinds of options did farmers have?

PP: All over the world, if there’s a well, people put a bucket down the well with a rope on it, and they pull the bucket up by the rope. Then a leverage version of that. Think of a horizontal pole on a fulcrum, and it’s weighted at one end. So you put the bucket down into the well and there’s a pole, and at the other end there’s a weight so that it balances the work. You’re pulling the rope down as it goes into the well, but then the balance is helping you pull the water up with the bucket. In Bangladesh, they had for shallow lifting what they call a swing basket: Two men, usually, have something that looks like a bamboo baby’s diaper, and it has two ropes attached to each end, and they handle this so it scoops the water. It moves the water maybe two feet up from a pond into an irrigation channel, and two people are scooping the water up by hand. Then in Bangladesh, at the mechanized end, the World Bank subsidized diesel pumps, shallow and deep. But those cost a lot of money, far too much for somebody to afford, so they gave them away to farmers.

MJ: It’s something that’s going to have such a huge return in the long run. That’s sustainability right there.

PP: Well, and since I’ve handed over IDE—I think I mentioned that, didn’t I? A year ago I handed it over to a new leader, and I’ve started a new organization that’s applying these principles beyond agriculture.

MJ: And what’s the name of that organization?

PP: D-Rev, for Design Revolution, and it’s basically designing affordable tools that make a world of impact, especially on poverty. We’re working on a way to cut [the cost of] solar energy by two-thirds. These are all business ways, ways to make clean drinking water available through a series of water kiosks, franchises like Colonel Sanders. On this trip to Uganda and Kenya we just came back from, we were designing a way of treating milk so that it doesn’t spoil. Normally what you do with milk is you chill it right away, but that takes a lot of energy, so we’re going to design a tool which, if successful, will kill all the bugs in milk by exposing it to ultraviolet light. And now farmers will have at least 12 to 24 hours before their milk spoils. The problem small farmers have is there’s a morning milking and an evening milking, and if you only got two, three, four hours before the milk goes bad, most of the evening milk you have to drink yourself or boil, so you don’t get the economic value out of it. That’s farming, but with energy, one of the reasons solar and photovoltaics are not catching on is because they’re too expensive, so we’re designing a way to cut the cost, just like we cut the cost of drip irrigation by three-quarters. It’s the same idea applied to a whole spectrum of things.