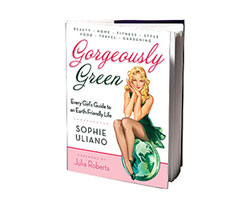 To hear the audio of MoJo’s interview with Sophie Uliano, click below:

If you’ve sheepishly avoided going green for fear of having to give up nail polish and other ecosins, Sophie Uliano wrote Gorgeously Green with you in mind. Her eight-step program doesn’t ask readers to sacrifice lattes or pedicures to save the environment. Instead, the Julia Roberts pal offers practical grocery store tips like how to shop for veggies (look at the produce sticker: numbers beginning with an eight mean it’s genetically modified; numbers beginning with a nine mean it’s organic) and recipes for homemade, all-purpose vinegar cleaner.

Inspired by a college professor to do her part for the planet, Uliano designed her book like a class, complete with checklists and quizzes. She spoke with Mother Jones on everything from pricey face creams to finding your own shade of green.

Mother Jones: If a person were to change just one habit to lighten their environmental footprint, what should it be?

Sophie Uliano: This is a question that I get asked a lot. It’s a tough one because in terms of going green or living a more sustainable life, I don’t believe that there’s just one action that’s going to make this massive impact. It’s a cumulative effect of hundreds of little actions that you take throughout your day. If you were to ask me which were the most important, I think the two big ones would be changing your transportation—so driving and flying less—and the other thing would be changing your eating habits. So those would be the sort of two main ones, the first ones on my list. The excitement to me is that it’s hundreds; almost every action you take throughout your day, you can make a different choice and a better choice.

SU: I would say that it would be Vrksasana, which is tree pose because you are being a tree; you are reflecting getting very grounded and rooted and balanced. That one pose teaches all those different aspects. It teaches balance, it teaches focus, and it teaches you how to get grounded and centered. I think all of those aspects lend themselves very nicely to learning how to be green.

MJ: You speak a lot about saving money by going green. The homemade all-purpose cleaner is great. But I’ve noticed, and I’ve experienced, that the ecohotels and the night cream are a little pricey. What’s up with that?

SU: They are. They definitely are. But here’s the way that I look at it: You know, you may be paying almost double—not always, actually, it depends where you shop. So if you’re a girl who likes to get a relatively pricey face cream from a department store then it’s not going to be any more expensive than a green version. However, if you’re used to buying things from a drug store or a grocery store and then you’re going to switch to something green, then yes, you’re definitely, probably going to be paying almost double. But in my mind it’s a compromise or it’s a change that is well worth the money. I think that what we put on our skin and what we eat, you just cannot compromise. You cannot keep on putting things that are toxic and that are going to compromise your health on your skin. Your skin absorbs. It’s the same as eating. Over 60 percent is absorbed directly into your blood stream. So to me paying that little bit extra is absolutely worth it. It’s health insurance.

SU: If I were living in Europe I would pick the Smart Car for sure. Living here in Los Angeles it would make me a little nervous in that tiny little Polly Pocket car on the giant freeways. So I think I would go for the Prius. I actually drive the Toyota Highlander, the hybrid, which I really like.

MJ: What’s your one green sin?

SU: My one green sin is having a bath. A long, hot, deep bath with lots of nontoxic bubbles and aromatherapy oils in it. It’s just something that I love to do, I’ve always loved to do, coming from England. Even if it’s hot here, at the end of the day it’s how I de-stress. Instead of having one every night like I used to it’s now maybe once every two weeks. And it always feels like whatever it is—50 gallons of total, wasteful, sinful water. But that’s my sin.

MJ: Is there such a thing as green consumerism, or is buying new stuff inherently unsustainable?

SU: You know, it’s six of one, half-dozen of the other. Now, when we talk about green “stuff,” if we’re talking about buying green it depends on if it’s necessary. I think just buying, consuming things that aren’t necessary—whether it be clothes, shoes, purses, nail polishes—yeah, that’s green consumerism and I think a huge part of going green is saying, “You know what, I don’t need this. I really don’t. I don’t need more clothes, more nail polishes, I don’t need another tea kettle or hair dryer even if it’s telling me that it’s ecofriendly. We know that there’s a lot of greenwashing out there, so we have to be very careful about that. I think a lot of times for me being green is stopping and going, “I don’t need more stuff.” Because where’s it going go, where is it going to end up? Everything has a grave site, and I just find the waste to be abhorrent. But that being said, if there’s something that you need to buy like we’ve already discussed —skin care products, hair care products, food, everyday things—going green in those areas and buying and consuming green in those areas is a great thing.

MJ: Bonus question: You push a lot of green products in your book; on the website you point out a lot of good things. Are you sponsored by any of the products that you promote, or do you own stock in any of the companies, or do you just think that these are good things?

SU: I don’t, no. I just promote, or recommend, should I say, products that I really like. What I try and do, well, not try, I do all the time, I never recommend anything that I haven’t tried. So every single thing that is in my book or on my website I’ve actually tried. My only hesitation sometimes in recommending things is that some of them are quite pricey and I really like to try and recommend things to people that are affordable to everybody. But no. The answer is I’m not, and I have a lot of people wanting me to sponsor, to endorse them and whatnot, but no, I am not.