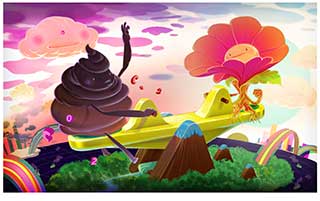 Noting that contributing to global warming would be “ironic, not to mention wrong,” the producers of An Inconvenient Truth announced in June 2006 that they had given $496.80 to NativeEnergy, a well-regarded carbon-offset company. The firm, in turn, said the movie was providing “critical revenues” to several renewable-energy projects, including a Pennsylvania dairy farm that planned to capture and burn the methane emitted by its cow manure. Such efforts to cut greenhouse gas emissions, said one of the film’s producers, “would likely not happen without these kinds of investments.”

NativeEnergy says that by agreeing to buy the dairy’s methane reductions for 20 years, it ensured the poop project’s success. The farm’s co-owner says that she and her husband would have tried to build the digester even without the offset money, since they planned to use it to produce electricity and trap odors. So did NativeEnergy really help to create a new carbon offset, or just piggyback on an existing project and charge customers such as An Inconvenient Truth to support the status quo?

Only in the world of documentary filmmaking would a $500 question set off a finger-pointing firestorm. But in the mini-controversy surrounding An Inconvenient Truth‘s carbon footprint lies a cautionary tale about how hard it is to tell good offsets from bad in an industry with rapidly rising stakes. The best of these swaps reduce greenhouse gas emissions without environmental or social costs; the worst have been compared to medieval indulgences—absolving environmental sins with little more than feel-good marketing. The sometimes fuzzy line between the two is becoming evident as the carbon-offset market is poised for a potentially lucrative boom, with myriad new players lining up for a piece of the green.

In 2007, ecoconscious consumers and corporations spent $330 million on offsets, paying to balance the greenhouse gas emissions of everything from suvs to oil refineries by eliminating an equal amount of emissions elsewhere. Now the offset sellers and their backers have their eyes on a bigger prize: The enormous offset market that would be created if the federal government were to require companies to reduce their carbon footprints.

The offset lobby has set its sights on Capitol Hill, where Congress has been considering competing carbon-reduction plans. The Lieberman-Warner Climate Security Act, which was debated in the Senate this week, would have made companies reduce their CO2 emissions a full 70 percent by 2050, but would allow them to use carbon offsets to achieve up to 30 percent of their reductions. Although the bill failed to pass this morning, it will be a template for the next Congress, where climate legislation is sure to be a top priority. Other climate bills would allow for even more offsets, but even under Lieberman-Warner, the federally regulated offset market would be more than 40 times larger than the current consumer market.

Supporters of the Lieberman-Warner plan point to the success of the offsets program created in 2003 under the Kyoto Protocol’s Clean Development Mechanism, CDM, a carbon-trading system that they say has been more efficient and cheaper than forcing companies to cut emissions.

Yet prominent environmental groups such as the Sierra Club and Greenpeace are resisting the inclusion of offsets in the bills. “We feel that offsets are very suspect,” says Shawnee Hoover, legislative director for Friends of the Earth. “The whole system is just rife with the potential for corruption.”

Opponents cite the perverse incentives that have been created under Kyoto’s CDM, which last year authorized hundreds of offset projects to be converted into $1.2-$1.8 billion worth of carbon credits. At the heart of their concerns is the question of whether these projects are “additional”—in other words, do they create new emissions reductions, or simply bankroll endeavors where carbon credits are incidental, yet profitable, byproducts? A 2006 United Nations investigation found that a third of CDM-approved offset projects in India would have happened even without Kyoto funding. In China, almost every new hydroelectric and natural-gas-fired power plant has applied for CDM money, casting doubt on whether they really require the offset revenue to be built. “It looks like the CDM is just turning into a production subsidy,” says Stanford University climate policy expert Michael Wara, “and that’s not a good way to spend our money.”

In total, CDM-approved offsets have captured or destroyed the equivalent of 135 million tons of CO2 emissions worldwide, slightly more than the annual emissions of Pakistan. Yet an astounding 51 percent of those offsets have been generated by paying refrigerant manufacturers to incinerate HFC-23, an industrial byproduct and potent greenhouse gas, instead of spewing it into the atmosphere. The price of HFC-23 offsets can be worth more than twice the market price of the refrigerants themselves, which has had the unintended effect of encouraging refrigerant companies to produce (and then destroy) even more greenhouse gases in the name of eliminating them. The 43,000 tons of HFC-23 incinerated between 2003 and 2012 will generate $6 billion worth of carbon credits, but cost just $150 million to destroy, according to Wara. He describes the practice as “an excessive subsidy that represents a massive waste of resources.”

Deutsche Bank, a European investment bank that has financed HFC-23 offsets, disagrees. Through the Geneva-based International Emissions Trading Association, it is lobbying for US climate legislation to include offsets from the developing world, where most HFC-23 is produced. (Currently, Lieberman-Warner effectively limits international offsets to those sold in Europe.) IETA, which also represents BP and American Electric Power, wants to convert its members’ existing investments in Chinese dams and Indian wind farms into carbon credits on the American market, where they would trade for less than domestic or European offsets.

“The atmosphere really does not care whether a ton of emissions are reduced in Brazil or in the US,” says David Hunter, IETA’s lobbyist on Capitol Hill and a former adviser to Republican Senator Susan Collins of Maine, a leading cosponsor of Lieberman-Warner. “The key is to reduce as many tons as you can as quickly as you can.”

In addition to pushing Congress to replicate the Clean Development Mechanism, the carbon lobby wants an even wider range of offsets to buy and sell. It supports a provision in Lieberman-Warner that would allow companies to receive retroactive credit for offsets purchased through voluntary markets such as the Chicago Climate Exchange. Like the CDM, the Climate Exchange has been criticized for approving questionable offsets. For instance, it paid some Midwestern farmers to reduce methane emissions by practicing no-till agriculture, even though they’d been doing so for more than a decade. The exchange’s founder, Richard Sandor, has donated $34,000 to candidates including Senators John McCain and Barack Obama.

The Carbon Offsets Providers Coalition, the self-described “Better Business Bureau of carbon offsets,” is lobbying for climate legislation to incorporate “enhanced oil recovery,” a petroleum extraction process in which CO2 is injected into old oil wells. Critics say such a move would create a new subsidy for the oil industry. Lobbyists have also proposed exempting offset projects from being regulated under the National Environmental Policy Act, which requires developers to carry out environmental-impact studies.

At the Carbon Forum America, a recent trade show in San Francisco focused on cashing in on the “new carbon-constrained economy,” attorneys from the law firm Hunton & Williams passed out “carbon neutral” burlap handbags, along with pamphlets touting their experience “dealing with climate change on Capitol Hill.” Not mentioned was the firm’s $3 million in lobbying for 22 different oil and coal interests last year.

Most offset companies are not against some kind of oversight, such as allowing third-party auditors to vet their projects. But they want the system to be more streamlined than the CDM’s, which is plagued by bottlenecks. The Offset Quality Initiative, a group focused on “high quality greenhouse gas offsets,” supports a fast-track approval process for certain kinds of projects, such as those that capture methane from cow manure. That approach isn’t foolproof, concedes Janet Peace, an economist with the Pew Center on Global Climate Change. “Some projects will be business as usual for whatever reason,” she says.

Seeing offsets get a bad name doesn’t sit well with Aimee Barnes, a one-time activist with the Natural Resources Defense Council who now works for the British offset firm EcoSecurities. “We wanted to be in a place where we could utilize capitalist sentiment to drive environmental change and innovation,” she said at the San Francisco carbon confab, sitting at a booth decorated with images of lush forests. But walking the line between corporate clients and environmental critics is proving tough. “We are in this bizarre gray space in between,” she mused. “Nobody really likes us.”