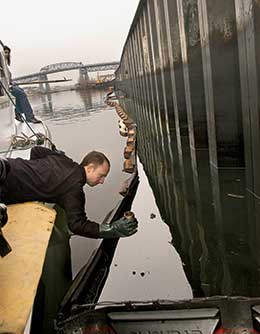 basil seggos leans against the rail of the 36-foot harbor patrol boat as it chugs along Newtown Creek into an industrial wasteland of sewer pipes and flotsam, past a huge conveyor belt carrying skeletal cars to the scrap heap and a natural gas facility belching plumes of orange flame. A gentle headwind conveys the odors one at a time: salt, sewage, sulfur, and then the powerful stench of petroleum. “You can really smell it before you can see it,” Seggos, the chief investigator for the environmental watchdog Riverkeeper, says, pointing to a black metal bulkhead along the south bank. The boat draws closer, and a purple sheen appears on the surface. “That’s all oil,” he says. It’s the bleeding edge of an environmental disaster, one of the largest oil spills in the world.

The discharge floating on this inland waterway, which divides the boroughs of Brooklyn and Queens, is just a hint at what lies beneath—anywhere between 17 million and 30 million gallons’ worth, a spill more than 50 percent larger than the Exxon Valdez. But unlike the Exxon Valdez, this one has been allowed to grow and fester for half a century, directly below a residential area. Even in the neighborhood—an old-time blue-collar community pocked with hipster enclaves—many people don’t know why the air smells like gasoline on rainy days.

“This is a working-class community with a dirty creek in a part of Brooklyn no one really cares about,” Seggos says. “It would have perhaps been a better thing if these were river otters covered with oil. You’d have had immediate action.”

No one’s really sure how long the oil has been there, but most people point to a massive explosion that ripped through the city’s sewer system in 1950, raining manhole covers down on the populace. City officials blamed gasoline leaking from what was then Mobil’s Brooklyn refinery. Mobil denied it. That was pretty much the extent of the investigation, and for a couple of decades the oil quietly continued to drip into the soil and groundwater under the refinery, spreading beneath the neighborhood and oozing—a tenth of an inch every hour—toward the bank of Newtown Creek.

In 1978, a Coast Guard helicopter spotted an oil slick on the creek. Investigating further, the Guard discovered the 55-acre monster that had by then massed beneath the city. Chemical analysis fingered Mobil as the source, and again the company said it wasn’t at fault. By now, Mobil had sold part of the refinery to Amoco and was using the rest for storage tanks. A few blocks away, a Texaco subsidiary also had a storage facility. The companies (now known as ExxonMobil, BP, and Chevron, respectively) pointed fingers at each other; government agencies, sensing that this was not a rumble they wanted to be involved in, did the same.

The Coast Guard, having spent half a million dollars investigating the spill, decided it had done enough; the case was turned over to the state of New York, which wanted no part of it either. Believing that the spill, while regrettable, posed no immediate hazard (no one drank the groundwater anymore, and the manhole-launching explosions had long ago subsided), officials decided not to apply their recently established oil spill fund to what was by far the state’s largest oil spill, on the grounds that the spill predated the fund. So the buck was handed down to New York City—which, still reeling from its financial near-meltdown in the 1970s, chose not to do battle with a brace of oil company lawyers. For a decade, nothing happened. And the oil lake quietly grew.

“you become something of a stink connoisseur when you live in Greenpoint,” says Teresa Toro, who lives two blocks from Newtown Creek. The neighborhood features rows of meticulously kept houses, manicured parks, and cafés catering to an influx of ex-Manhattanites, but it also remains the location of choice for projects that would never be placed along Fifth Avenue: sewage treatment, waste transfer, natural gas storage. For Toro, the oil fumes are the worst. “When the wind is just right, I can smell it blowing off the creek. Sometimes we can’t open our windows.

“The [sewage treatment] plant people get very defensive when you call up and complain about the smell,” Toro laughs. “They say, ‘That’s not us! It’s the spill!'” But then she turns serious. “Every time I go to the creek, I just get so angry,” she says. “I feel like I’m watching a crime in progress.”

Local lore holds that it was the Valdez crash that finally shamed the state into action in 1990. “Not at all,” says Joseph Lentol, the neighborhood’s state assemblyman since 1972. The truth, he says, is worse: In 1988, Mobil had another leak—35,000 gallons—and felt the need to notify the city that, by the way, there happened to be 17 million gallons more underneath. The state’s Department of Environmental Conservation began negotiating a consent order forcing Mobil to clean up its mess.

The deal, in the end, required no monetary damages, set no firm benchmarks for progress, and demanded removal of the oil floating on top of the groundwater but not of the contaminated soil. It also gave Mobil a powerful tool for staving off litigation—the company was, after all, complying with a government-mandated cleanup. “A consent decree is nothing more than another word for a plea bargain,” says Lentol. “It was a slap on the wrist.”

As time wore on, the people of Greenpoint would come to revile the environment department as much as, if not more than, the oil company itself. At least they weren’t paying Mobil executives’ salaries. A spokeswoman for the department, Maureen Wren, says the consent decree should be viewed in light of “the information available at that time” and that the state has always been committed to holding the company responsible. But by the time another decade had gone by, ExxonMobil and the other oil companies had removed less than 8 million gallons. There was no reason for them to pick up the pace. Until Riverkeeper showed up.

“We found out about it by stumbling across it, literally,” Seggos says, recalling how he noticed the sheen on the water one day in 2002, while floating along Newtown Creek to educate immigrants about the dangers of fishing there. He assigned an intern to look into it and was soon presented with a fantastic-sounding story about a 17-million-gallon-plus underground lake of oil. “I said, ‘You idiot! What the hell are you talking about? Go back and do more research!'” After almost another year of investigation, Seggos approached the state to see if Riverkeeper—a small, 41-year-old environmental group whose top attorney is Robert Kennedy Jr.—could help apply pressure on ExxonMobil. “They totally blew us off,” he says.

In 2004, Riverkeeper notified the environment department that it planned to sue ExxonMobil, BP, and Chevron on behalf of a half-dozen local residents (including Teresa Toro). The suit sought no damages, only a proper cleanup. But behind the scenes, Seggos had begun laying the groundwork for a major toxic tort suit, facilitating a series of sometimes-awkward meetings between out-of-town trial lawyers and reticent locals. “It’s a very difficult community to penetrate,” he says.

That got a lot easier in the summer of 2005, when results of vapor tests Seggos had commissioned came back showing dangerous levels of explosive methane gas and benzene, a carcinogen. The neighborhood erupted as if the oil itself had been set ablaze. People who had long believed the spill to be merely a foul-smelling nuisance now began tallying the community’s sick and its dead.

“It’s up to 35 or 36 people that I know that have had cancer just on this block,” says Tom Stagg, a retired detective who’s lived near the spill his whole life. Sitting at his kitchen table, he rattles off the list: his mother, father, stepfather, his neighbor’s wife, a friend of his daughter’s, his pal Joey, a nine-year-old kid a couple streets over. “It’s too many,” he says. “Too many people.”

Jane Pedota lives directly above the spill. A couple of her neighbors, she says, have exactly the same pancreatic problems; another neighbor has died of a brain tumor, and his wife died of myelofibrosis, a cancer linked to benzene. “I’m telling you, you’re seeing odd things,” Pedota says. “Too coincidental for me.”

By the end of the year, the lawyers Seggos had brought in, Girardi & Keese—of Erin Brockovich fame—filed suit against the oil companies. Stagg and Pedota signed on. Brockovich herself showed up to rally the residents.

By the time the environment department convened a public meeting last year, the neighborhood had built up a full head of steam. Hundreds packed the Princess Manor banquet hall to hear presentations by ExxonMobil, BP, and Chevron, hectoring company representatives with catcalls of “liar!” and “shame on you people!” A health department spokesman tried to reassure the crowd, saying the state was unaware of any health threat but acknowledging that no studies had been done and none were planned. When state officials announced the cleanup would last another 20 years or more, the room fell silent.

That April, Riverkeeper obtained internal ExxonMobil documents showing that the company had known of high levels of benzene and other chemicals a decade earlier, when the substances were detected in a commercial property just 1,000 feet from the Pedota household. (ExxonMobil spokesman Brian Dunphy told Mother Jones that the tests, which were not conducted by the company, aren’t proof of a health threat.)

The pressure continued to build until June 2006, when the talks between the environment department and ExxonMobil imploded (neither side will say why), whereupon the state finally referred the case to then-Attorney General Eliot Spitzer. Days later, Congress approved funding for a full epa study of the spill, the federal government’s first involvement in the case since the Coast Guard sailed away in 1979.

In February, Spitzer’s successor, Andrew Cuomo, announced that his office intended to sue ExxonMobil (he filed the suit in July) to force a speedy cleanup. But the threat of litigation seemed to have the opposite effect. ExxonMobil shut down its groundwater pumps, which had been sucking up oil at a rate of 1,110 gallons per day, slowing the cleanup to a near halt. At the direction of the environment department, the company restarted the pumps this summer; the various lawsuits facing ExxonMobil remain ongoing. “I told my kids, ‘This won’t be settled until I’m dead and gone,'” says Pedota—who, like everyone else on her block, flies the Stars and Stripes in front of her house all year long. “But it would be nice to see that you could raise your children here.” As she spoke, the oil beneath her home continued to creep, a tenth of an inch per hour, toward the creek.