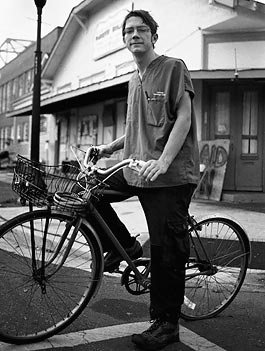 [You can read an extended version of this story with extra photographs here.]

A FEW DAYS AFTER HURRICANE KATRINA slammed into New Orleans, a small group of strangers on bicycles showed up in the Algiers neighborhood, knocking on doors and asking if anyone needed medical attention. Algiers was, at that point, a place of eerie silence, confusion, and fear. Fear of the wind and the rain; fear, too, of the police, of criminals, and of one’s neighbors. The neighborhood’s streets had stayed above the floodwaters, but power was gone, along with any semblance of organized public life. Rumors of armed gangs and vigilantes ran rampant.

Residents asked cautiously if the strangers were from the Red Cross or the government, neither of which had yet made an appearance in Algiers. They were told that no, these were volunteers who had come without anyone’s authorization. They were, in fact, “street medics”—a loose network of activists who had organized to provide emergency treatment at street protests. The locals accepted the offers of first aid, allowing the visitors to take blood pressure, test for diabetes, and inquire about symptoms of anxiety, depression, and disease. “It was just about the noblest thing I’ve ever witnessed in my life,” recalls Malik Rahim, a lifelong Algiers resident, local housing activist, and former Black Panther who put out the call for assistance and helped arrange space for the medical workers in a local mosque. “It was the street medics who really stopped this city from exploding into a race war, because they were white and were serving the black community at a time when blacks were fed up. Those are the real heroes of this thing.”

From those first visits sprang the idea for a full-fledged medical facility known as the Common Ground Clinic, which served, from its headquarters in the Masjid Bilal mosque, up to 100 people a day in Algiers and dozens more at frequent “mobile clinics” set up in the Upper Ninth Ward and on the downtown parking lots where immigrant workers congregate.

If Common Ground was started by activists, it soon attracted more mainstream health care workers who discovered the project on the Internet. Lynne, a bubbly nurse from Harrisburg, Pennsylvania, found her way there in the fall while searching for ways to volunteer after she was laid off from a job. The first few days were “a very big cultural shock,” she confesses, pointing to some of her new friends clustered outside on a smoke break. “Why don’t they shave their legs? I just don’t get it,” she says, laughing. “But now I love the people here. We all have a common purpose.” One afternoon, a camouflaged U.S. Army truck pulled up outside the mosque; a young National Guard lieutenant jumped out and announced that he had boxes of antibiotics and cortisone. Within minutes, soldiers just back from Iraq and anarchists who had been protesting the war were unloading the truck shoulder-to-shoulder, swapping anecdotes about the French Quarter.

For many of Common Ground’s patients, the clinic is a relief not just from Katrina and the health care vacuum that followed—Charity Hospital, which treated most of New Orleans’ poor, has still not reopened—but from a quieter, longer-term emergency. “For many of them, the last time they saw a doctor was in prison or in emergency at Charity,” says Rahim. Which is why, as normalcy slowly seeps back into New Orleans, Common Ground is beginning to shift from emergency response to something more complicated. By midwinter, the clinic had moved into a larger site across the street, where a steady stream of people from Algiers was signing up to volunteer. A community advisory board was being set up, and an umbrella organization, the Common Ground Collective, was becoming a homegrown effort at rebuilding hometown lives, offering “solidarity, not charity.” “That clinic is gonna be a permanent clinic,” says Rahim, who’s become the collective’s symbolic leader. “It’ll be served by the people it’s serving right now.”