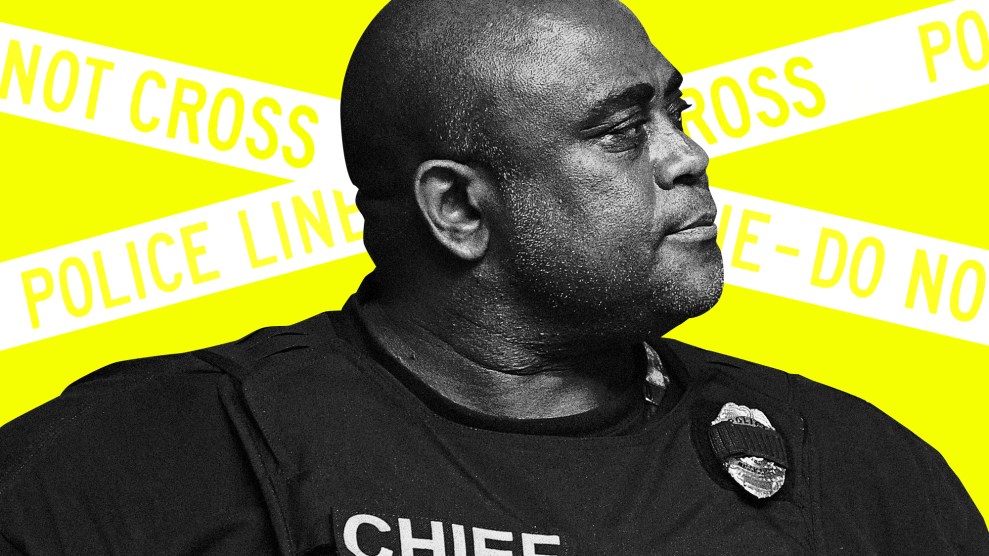 A Mississippi police chief has been caught on tape bragging that he crashed a nonviolent protest and thought about assaulting its Black organizer, who had criticized him on social media. “I thought about fucking him up right then,” Chief Kenneth Collins said of activist Marquell Bridges, in a conversation recorded earlier this year. The audio, leaked online last week, follows a detective’s allegation that Collins told her to hit Bridges with false criminal charges.

In February, Bridges organized rallies in Brookhaven—where Collins is chief—after a white father and son allegedly chased and shot at a Black FedEx driver delivering packages. Although the driver wasn’t wounded, the incident drew comparisons to the fatal shooting in Georgia of Ahmaud Arbery, a 25-year-old Black man who in 2020 was chased and killed while jogging by a white father, his son, and their neighbor.

About a week after the Brookhaven attack, Gregory and Brandon Case turned themselves in and were quickly released on bond. Prosecutors charged the first with conspiracy to commit assault and the second with purposefully shooting into a motor vehicle, allegations that the pair deny. A grand jury is now considering whether to indict them. But in the days after the attack, both the FedEx driver, 24-year-old D’Monterrio Gibson, and the local NAACP chapter called on Chief Collins, Brookhaven’s Republican Mayor Joe Cox, and other law enforcement officials to resign for failing to adequately address incidents of racism. “Brookhaven is not a racist, prejudiced town,” Collins said at the time, according to the Jackson Advocate, a Black newspaper in nearby Jackson, Mississippi. “You can’t judge a town by the actions of two individuals.” According to a federal lawsuit, Gregory and Brandon Case are relatives of the police department’s assistant chief.

Collins was venting in the recording about the fact that Bridges invited groups including the New Black Panther Party to the demonstrations, along with community members who had been affected by police violence, according to Mississippi-based activist and journalist Leo Carney, who knows Bridges personally and shared the recording on Twitter.

“I sat there and watched them all day. They’re bringing up every piece of dirt they got on us,” Collins says in the recording. “Any-fucking-body that got a problem with the police department, they had them up there.”

Collins then describes an encounter with Bridges and other activists toward the end of the protest. “So when I got ready to leave, them motherfuckers surrounded me. This Marquell Bridges, the motherfucker on Facebook talking all this fucking shit,” Collins says. “And that’s when I stopped and looked at him. He’s the big son of a gun with the dreadlocks. I thought about fucking him up right then.”

“I had my overalls on,” the chief notes. “I very seldomly carry a gun. I brought God with me.”

Bridges, the activist, had previously laid into Collins and other police on Facebook, describing the chief, who is Black, as a “sambo” and “puppet” who “covers up the injustice that happens” and “allows his officers to mistreat and wrongly arrest its [Black] citizens.” Bridges told me he recently received the recording of Collins from a Brookhaven police employee. “Collins had it out for me and other protesters from the time he heard we were coming,” he said.

Bridges said that at the protest in question, Collins approached the FedEx driver, Gibson, who was standing with his mother, and apparently attempted to intimidate them. Collins “jumps out the truck,” Bridges recalled, “and walks straight to D’Monterrio, like a lone wolf with his overalls, like ‘I’m not scared of y’all.'” Bridges said he and other protesters surrounded Gibson to protect him, and that nobody threatened Collins. “We surrounded [Gibson] to get him away from him,” Bridges told me, referring to Collins. “Everybody put their hands up. He was trying to agitate us.”

Mississippi-based crime news website Darkhorse Press described the protest as tense, and said Collins arrived as the crowd was dispersing. He began to address the protesters, saying they would owe him an apology, possibly for negative comments  about police. When Gibson’s mother, Sharon McClendon, addressed the chief by his first name in a question, Collins told her to refer to him as “Chief Collins,” eliciting negative murmurs from the crowd. Some protesters started circling him, shouting, “No justice, no peace, no racist police,” until a lead organizer asked them to move back. The county sheriff, who had jurisdiction at the event, eventually put his arm around Collins and spoke to him, and Collins walked back to his truck.

“I said, ‘I love you, Sheriff, but I brought Jesus with me. I ain’t scared of these motherfuckers,'” Collins claims in the recording. “The sheriff said, ‘I know, Chief. But come on with me. We’re outnumbered.'” Collins then seems to imply that he had weapons in his truck. “I don’t give a fuck about no rifles they’re carrying,” he said, possibly referring to protesters from armed groups such as the New Black Panther Party. “I got every fucking thing I need in my truck…I had more of what they got, but I didn’t come there…” he says, trailing off for a moment before adding, “I sat there and looked at that fucking Marquell Bridges. I thought about putting my left foot at the right side of his ass.”

Collins did not respond to multiple requests for comment. Bridges says the full recording is more than 20 minutes long and contains other intimidating comments; he did not release the entire tape because he plans to sue Collins for the chief’s alleged threats, and hopes to pursue criminal charges. “I want it released,” Bridges told me. “I’m going through the proper legal channels.” Our team heard and quoted only the roughly two minutes of audio Bridges has leaked to date.

In a rare turn, another police officer has also accused Collins of inappropriately targeting Black activists. In July, former Brookhaven Detective Latoya Beacham sued Collins, alleging retaliation after she refused his orders to obtain arrest warrants for Bridges and other Black activists on what she believed were false charges. “Collins opposed the protests,” Beacham’s complaint reads. “He directed that any member of the Black Lives Matter who participated in a protest [should] be arrested…[He wanted] to punish members of Black Lives Matter.”

Beacham was so upset about Collins’ demand to arrest the activists for First Amendment–protected activity that she spoke with her pastor. When Collins found out that she had confided in the pastor, according to the complaint, he suspended her and asked the police department’s governing board to fire her for insubordination. When the board refused, Collins demoted Beacham to a patrol position, which required her to work nights and hindered her detective work. He also allegedly interfered with her investigations, gaining access to files and refusing to release them to her. “Having no other option,” her complaint states, she left the department.

Collins responded to the lawsuit with a brief statement on Facebook. “A group has been working together trying to destroy me and our town,” he wrote. “FACTS MATTER and I look forward to my day in court.”

Bridges said that although Beacham refused to sign the affidavit against him, another officer did, arresting him for disorderly conduct. He is out on bond and disputes the charge.

Other Black activists in the area have felt intimidated by Brookhaven police, according to the Advocate. The Brookhaven NAACP chapter attempted to schedule a large press conference after Gibson was shot at—but an “overbearing police presence” caused most speakers to postpone at the last minute. “There were law enforcement officers behind buildings and around corners,” the chapter’s president, the Rev. Rico Cain, told the paper.

Gibson said during another press conference around the same time that both Brookhaven police and FedEx officials asked him not to speak with the media about his case. He and his family urged prosecutors to pursue attempted murder charges with hate-crime enhancements, and accused Brookhaven cops of failing to adequately investigate. Police gave the defendants “too much time to hide evidence,” Gibson said. “They were too focused on worrying about what people thought about Brookhaven.”

Gibson tried to make a police report after the incident, but said Brookhaven officers did not take him seriously despite the bullet holes in his van and through the packages. Six days later, Gregory and Brandon Case turned themselves in. Citing the Cases’ police ties, Gibson’s attorneys called on Brookhaven PD to recuse itself in favor of the Mississippi Bureau of Investigation, which was already collaborating on the case. “The most frustrating part of this situation” was law enforcement’s response, McClendon, Gibson’s mother, said at a February press conference. Though Gibson reported the shooting immediately, with evidence, “there was no immediate arrest,” she said. Instead, the suspects “were allowed to turn themselves in” and “did not spend one night in jail.”

Outside of Brookhaven, Bridges says, the attack on Gibson has gotten too little attention. “They tried to do him just like Ahmaud Arbery, but nobody seemed to care because he didn’t die,” he said.

But Gibson has told reporters that he’s still living with the effects. In July, he received a letter alleging that a Louisiana white supremacist heard about his case and wanted to kill him. “He said…he won’t miss this time like the other person did,” the letter reads. The FBI said it was investigating. “Sometimes, I would like to come inside the house and close my door and stay inside my house for three to five days at a time,” he told the Mississippi Free Press. “It’s like a struggle every day to do the basic tasks that used to be easy for me.”

Meanwhile, Bridges, the activist, continues to wonder about the police chief’s response to the protests: The rallies were about “two ordinary citizens,” the Cases, he says. “We didn’t even come to Brookhaven to fight the police.”