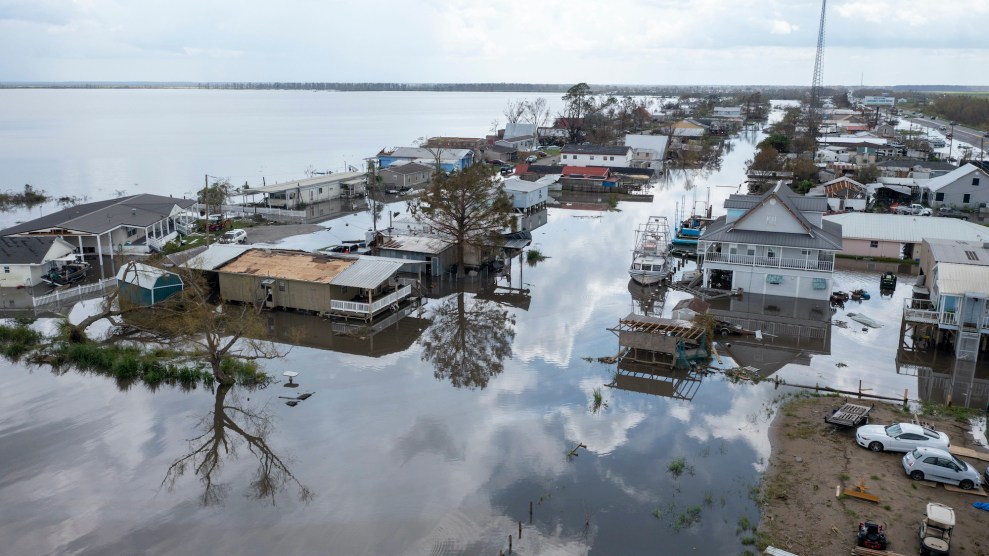 Last Friday, as Hurricane Ida was tearing up trees and ripping roofs from homes in western Cuba, officials on the Louisiana coast put out the call to residents: Get out. Forecasters were saying the “extremely dangerous major hurricane” would make a beeline for the bayous and oil refineries along the Gulf Coast. In Lafourche Parish, where the storm would eventually make its landfall, parish president Archie Chaisson issued a mandatory evacuation order. “Not the easiest decision I’ve ever made in life here in parish government,” Chaisson told residents in a Facebook livestream. “But one we felt was necessary, as a group, to help keep everybody safe.”

Everybody, that is, except the roughly 600 people locked in the Lafourche Parish Detention Center. A day after the evacuation order, some of the detainees were tasked with filling up sandbags to protect residents’ property against flooding. People incarcerated in the parish were not evacuated, even as the storm gained massive force over the next 24 hours—building from the Category 1 storm over Cuba to a Category 4 cyclone just offshore.

The legacy of Hurricane Katrina looms large over this decision. In 2005, before that disaster, the sheriff in New Orleans, Marlin Gusman, decided that people in his massive Orleans Parish Prison would “stay where they belong,” even though the mayor had issued a mandatory evacuation order. When the storm hit the city, the jail’s generators failed, plunging around 7,000 prisoners, pretrial detainees, and staff into darkness and sweltering heat. Lacking electricity, many cell doors were stuck shut; detained adults and children remained trapped for days as their cells filled up to chest height with sewage-tainted water, according to an ACLU report published the following year and based on interviews with hundreds of people. By the time the sheriff changed his mind and decided to evacuate, there were only three boats available. The number of deaths is still disputed.

Perhaps with this history in mind, many Louisiana sheriffs decided to evacuate their jails in advance of Ida. Nicholas Chrastil, writing in the Lens, reports that hundreds of pretrial detainees were sent from the Orleans Parish Prison to the Louisiana State Penitentiary, better known as Angola, which is further inland (According to state data, 27 staff and eight prisoners in Angola were COVID-positive as of last Wednesday.) Other sheriffs made the same call, evacuating parish jails in Plaquemines, Acadia, St. Mary, Vermillion, Terrebonne, and St. Bernard, according to Chrastil.

Yet the people incarcerated in Lafourche went nowhere. They’d been made to fill sandbags in the days leading up to the storm’s landfall and were still doing that work after the evacuation order, according to a video posted to the sheriff’s Twitter and Instagram pages on Saturday, and since deleted. According to the post, pre-filled sandbags were available to elderly and disabled residents.

Lafourche Sheriff Craig Webre wasn’t the only Louisiana sheriff to decide to keep incarcerated people in the storm’s path. The Jefferson Parish Correctional Center, on the bank of the Mississippi, kept 1,100 detainees in place. Jails in St. Charles Parish and St. John the Baptist Parish also did not evacuate.

Alesia Richards, whose fiancé is detained pretrial in the Nelson Coleman Correctional Center in St. Charles Parish—which also issued a mandatory evacuation order to residents—says he called her ahead of the storm and urged her to get out, so she drove to a friend’s home in Houston. The last time she heard from him was Sunday afternoon, as the storm was striking. Since then, she hasn’t been able to get an update from the sheriff, or reach the jail by phone. “Really, I have no idea what he’s going through right now,” she says. “What is he doing to survive?”

As it turned out, St. Charles and Lafourche parishes sustained some of the worst damage in the region. Webre told CNN on Sunday night that every road in the parish was impassible and two of three hospitals were damaged. Power in the region is not expected to be restored for weeks. A break in a water main has left many without clean water. But the sheriff’s gamble may have worked out, at least according to his spokesperson: On Monday, public information officer Capt. Brennan Matherne told Chrastil that the jail, though running on generator power, sustained “minimal damage.”

7:20 p.m. ET: The Lafourche Parish Sheriff’s Office spokesperson, Capt. Brennan Matherne, says the sheriff did not evacuate the jail “because it was built to withstand the threats this storm presented” and that there was a plan to evacuate if the hurricane damaged the jail to the point it hampered operations. The jail is now running “essentially as normal,” with generator power and access to clean water, Mattherne says. The video of incarcerated workers filling sandbags, meanwhile, was removed from social media “because we were getting so many responses it was hampering our communication efforts in the middle of an impending Major hurricane,” he writes. “We were just trying to highlight the efforts of our inmate workers.”