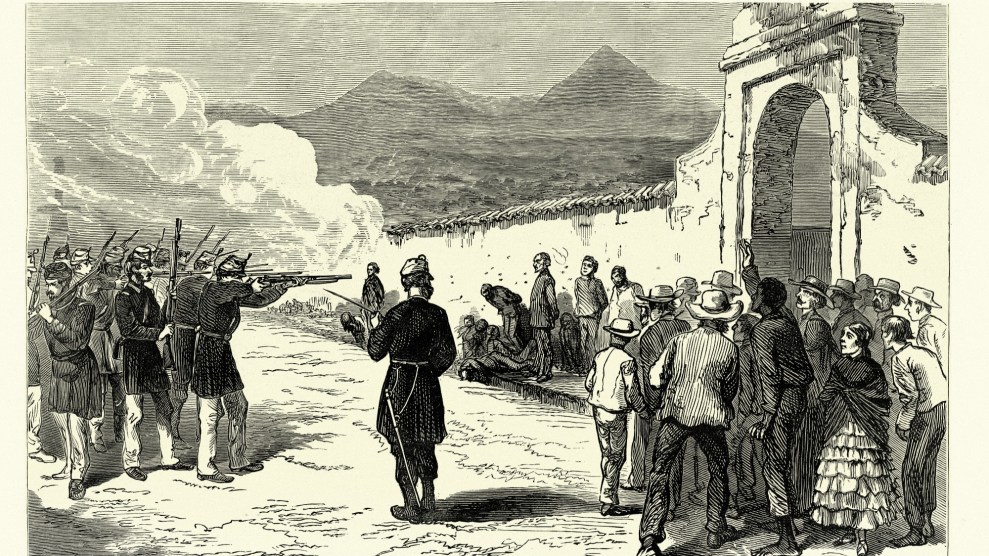 For 10 years, South Carolina was unable to execute anyone because the state couldn’t secure the drugs used in lethal injections. Initially undeterred, when the drug supply began running low, lawmakers approved the electric chair as an alternative method. The condemned were then given a choice between lethal injection and electrocution. Unsurprisingly, the inmates chose lethal injection since executions couldn’t be carried out.

But South Carolina now is poised to resume executions after its legislature this month approved a law that will allow prison officials to execute death row inmates by firing squad. Once Republican Gov. Henry McMaster signs the proposed bill, if lethal injection drugs continue to be unavailable, those scheduled to die will face two grim choices: either the firing squad or the electric chair.

South Carolina has been trying to revive its execution chamber for years. But this latest push, which has been successful thus far, is taking place when capital punishment’s popularity has diminished and when the GOP has reconfigured itself. No longer is it a party committed to promoting distinct policy proposals and conservative ideology. Instead, it exists as an outlet for white grievance, owning the libs, and opposing whatever policies the Democrats support—even ones that may in fact be beneficial to their constituents.

“The decade without executions in South Carolina should be seen as a mark of progress toward a culture of life, not a reason to backslide into immoral and gruesome means of killing.”

After last year’s racial justice protests and the ongoing deadly pandemic, Democrats have sought to reform the criminal justice system and address structural racism. For South Carolina Republicans, however, what better way to differentiate yourself from the liberals than championing a bill that would require death row inmates to choose between two barbaric forms of execution they would like the state to use? “The decade without executions in South Carolina should be seen as a mark of progress toward a culture of life,” said Krisanne Vaillancourt Murphy, the executive director of Catholic Mobilizing Network said in a statement, “not a reason to backslide into immoral and gruesome means of killing.”

Once upon a time, it seemed as if the Republican Party was seriously considering moderating some of its positions on capital punishment that had become increasingly unpopular. In New Hampshire, some Republican lawmakers voted to abolish the death penalty along with their Democratic colleagues. But, as with most things, all that changed during the Trump years, during which a record-breaking execution spree took place. Once this occurred, the only place left for the party to go has been further and further to the right. Gov. McMaster, who is up for re-election next year, has already established himself as one of former President Donald Trump’s most ardent sycophants (a very competitive position). He has groveled at the former president’s feet at any opportunity, including supporting Trump’s attempt to overturn the 2020 presidential election. Naturally, he has been one of the most enthusiastic supporters of the new law, which he insists will provide “closure” to victims’ family members.

We are one step closer to providing victims’ families and loved ones with the justice and closure they are owed by law. I will sign this legislation as soon as it gets to my desk.

The state’s execution history is a perfect microcosm of the racist nature of the entire criminal justice system. It’s impossible to ignore the racial disparities in who is chosen for capital punishment. Though they only make up one quarter of the state’s population, Black people make up more than half of death row inmates. The majority of the victims were white.

The state also can claim one of the most shameful episodes in the history of execution in the United States. In 1944, two white girls in Alcolu, South Carolina, Betty June Binnicker and Mary Emma Thames, went missing. Their badly beaten bodies were found on the Black side of town. George Stinney, a 14-year-old Black boy who had seen the two girls the previous day was quickly arrested, tried, and convicted by an all-white jury. There was no physical evidence tying the boy to the gruesome crime, but police claimed that he had confessed. George became the youngest person to be executed in the twentieth century. He was so small that the executioners used a Bible as a booster seat on the electric chair. George’s family has maintained his innocence for decades and 70 years later, in 2014, Judge Carmen Mullen vacated his conviction saying he didn’t receive a fair trial.

Since 1985, South Carolina has executed 43 people, making it one of the top ten states with the most executions. The last person put to death was Jefferey Motts in 2011 for murdering his cellmate Charles Martin while serving multiple life sentences for the killings of his relatives. Since then, the Palmetto state has been unable to procure lethal injection drugs after manufacturers in Europe ended shipments to states that intended to use their products to kill inmates. As a result, the rate of executions dropped dramatically, and five states, including Virginia, have abolished the death penalty altogether in the last five years.

Though it had been in use for decades, injecting the condemned with a lethal amount of drugs became the popular method in the 1990s after most states concluded it was the more “humane” option, despite scientific evidence that shows that for the person who is lethally injected, the experience is likely to be akin to drowning. Nonetheless, it is the method of choice for most death penalty states, but others include electrocution, the gas chamber, and firing squads as legal methods.

Of those options, firing squads have only been used sporadically in the United States since the US Supreme Court reinstated the death penalty in 1976. The last person to die by gunshots is Ronnie Lee Gardner in Utah in 2010, who chose the method, in which five anonymous marksmen stood 25 feet away from him and fired bullets into his chest. Sandra Yi, a local reporter who witnessed the execution said, “When he was shot, some of us weren’t sure if he had passed away because we could see movement.”

Despite appearing to be rather primitive, death penalty supporters, critics, and legal experts have pointed out that there is less chance of botching an execution if it is carried out by a firing squad. Of course, there is always room for error. In Indonesia, where a firing squad is the primary method, there have been stories of the marksmen missing the condemned and then having to shoot him again.

In the last two decades, the United States moved away from methods like hanging, firing squads, and electrocution because they conjured up images of a society so backwards in its thinking that it wasn’t properly horrified by the gruesome violence those methods produced. Lethal injection, conversely, seemed more sterile and painless—for the viewers at least. When lethal injection was introduced it was thought of as a compassionate and humane way to kill death row inmates, though scientific experts have concluded that it’s likely neither of those things. It’s still a way to end a life, but at least death penalty supporters could tell themselves that this was how a civilized, medicalized, and more sophisticated society handles a punishment that most wealthy nations have concluded is cruel and barbaric. But South Carolina’s fervor to resume executions by any means necessary has abandoned this facade of sanitizing the death penalty.

Currently, 37 people are awaiting death in South Carolina; three of them have exhausted their appeals and are eligible for execution. “Three living, breathing human beings with a heartbeat that this bill is aimed at killing,” Democratic state Rep. Justin Bamberg said when lawmakers were set to vote on the bill. “If you push the green button at the end of the day and vote to pass this bill out of this body, you may as well be throwing the switch yourself.”