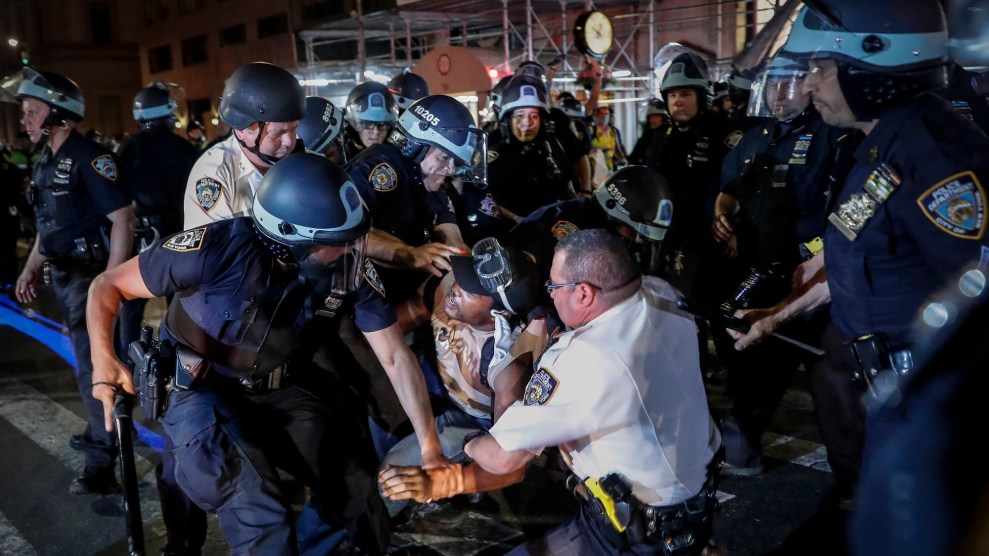 This week, the witnesses at the trial of Derek Chauvin spent several days testifying about police use of force, which includes shootings, the use of tasers, or in the case of the former Minneapolis police officer accused of murdering George Floyd last year, neck restraints. Multiple witnesses, including the Minneapolis Police Department’s chief, testified that Chauvin used excessive force when he pressed his knee onto Floyd’s neck for approximately nine minutes. Yet, the use of force, excessive and otherwise, remains one of the most ambiguous and commonplace practices in policing.

Their testimonies seemed clearly to point to Chauvin’s actions as being the cause of Floyd’s death. That is, until one realizes that even with damming video footage, it’s not too hard to argue the exact opposite. The cumulative effect of the litany of descriptions of police deploying force was a grim reminder of how hard it is to prove that any police officer used excessive force when detaining a suspect. That even if Chauvin is convicted, we are likely to be no closer to walking away with a clear-cut definition of what’s too much.

Many people who follow policing are intimately familiar with the consequences of the use of “excessive force.” We know that the answer to the question, “When is it too much?” is, “It depends.” A vivid illustration of how the ambiguity of what excessive means when its appended to the words “use of force” makes it harder to determine why Floyd died was the testimony from Minneapolis police officer Lt. Johnny Mercil, who is the department’s use of force coordinator. “We tell officers to stay away from the neck when possible,” he said in court. Not a hard and fast rule, but a suggestion—when possible.

“We tell officers to stay away from the neck when possible.”

Use of force seems to be the recurring theme when another police interaction with a member of the public turns deadly—like, for instance, in 2019 when Aurora, Colorado, police put 23-year-old Elijah McClain in a chokehold, killing him, after a 911 caller said he looked “sketchy?” Or when Rochester, New York, police officers pinned Daniel Prude, a man having a mental health crisis, to the ground after family members called 911. That’s not to suggest that police don’t have other options. After all, police manage to take alive some dangerous suspects like Dylann Roof, a white supremacist who shot and killed nine Black churchgoers in Charleston, South Carolina, in 2015.

The decision of when to use force is usually entirely at the discretion of a single police officer, and there are rarely any consequences for when it might have crossed a line. As my colleague Samantha Michaels reported in the aftermath of the non-fatal shooting of 27-year-old Jacob Blake in Kenosha, Wisconsin:

Even after atrocious policing, even after a man is paralyzed, use-of-force laws around the country often make it very, very difficult to punish cops. In Wisconsin and most states, police can legally fire their weapons against someone if they have “reasonable” fear the person will otherwise gravely harm them or someone in the vicinity. And here’s the kicker: The law usually says police officers get to define what’s reasonable.

During the Chauvin trial, the state of Minnesota made this point clear from the start: Officer Derek Chauvin was on trial, not their system of policing. Fair enough, but at some point it would be important to question similar tactics many other police officers use throughout the country. One month after Floyd’s death, in June 2020, the New York Times found at least 70 cases in the last decade in which police officers or other law enforcement restrained people until they couldn’t breathe. One of the most well-known cases took place in 2015 when New York Police Department officer Daniel Pantaleo put Eric Garner in a chokehold on a city sidewalk. Garner begged the officer to stop, insisting that he was unable to breathe. And then he died. Pantaleo was fired but was never charged for Garner’s death—even though he used a chokehold that had been banned by the NYPD.

Fast forward to this week of the Chauvin trial, where multiple experts, including MPD colleagues, testified that Chauvin went too far. The city’s police chief, Medaria Arradondo, testified that Chauvin had used excessive force on Floyd, especially when the victim was no longer responsive, and Chauvin continued to press his knee into him. “That in no way, shape or form is anything that is set by policy, is not part of our training,” he said, “and is certainly not part of our ethics or values.”

In order to counter the witnesses’ testimony, the defense relied on implicit racist tropes in order to make the case that Chauvin used an appropriate amount of force. Their argument? Both Floyd and the largely Black crowd watching the incident were the real threats. While cross-examining Mercil, the training officer, defense lawyer Eric Nelson kept returning to the presence of the bystanders, insinuating that the only reasonable response for Chauvin and other officers at the scene when faced with the group of people shouting was to become increasingly panicked. “If they’re saying, ‘I’d slap the fuck out of you’,” Nelson asked, “would that reasonably tend to rise alarm in a police officer?” Mercil said that it would.

Matthew Frank, the state prosecutor, offered a rebuttal to the defense’s question. “And if they’re saying, ‘Get off him, you’re killing him,’ should the officer also take that into account and consider whether their actions need to be reassessed?” the prosecutor asked. In another depiction of how “force” is open to interpretation, Mercil also agreed with that statement.

The litany of experts testifying that Chauvin used too much force felt much less powerful when Nelson’s line of questioning made it clear to the court that figuring out if a police killing is justified or unjustified depends on the eye of the beholder.

During Nelson’s cross-examination of  Mercil, the lawyer presented Minneapolis Police Department’s training materials, which included a diagram outlining the use-of-force continuum. The image depicted the types of force officers were permitted to use and when, which all depended on the subject’s “aggression” levels. For example, the training instructs officers to restrain the suspect if they are actively resisting, and to escalate up to deadly force if they are actively aggressive and all other tactics have failed. Nelson had previously argued that a police officer may not know when a subject may go from being compliant to suddenly resisting. It was a callback to the central theme of the case the defense was making: Chauvin had to keep his knee on Floyd’s neck because he was so dangerous, even when handcuffed, barely conscious, and on the ground.

A lay person might consider that a man with a knee on his neck and struggling to breathe is hardly aggressive. But in his defense strategy, Nelson summed up the insidiousness of American policing and robbed the previous testimonies of their power. “Simply because a person is not actively resisting,”  Nelson asked Mercil, “it doesn’t mean you can’t use some force.” The person responsible for training Minneapolis police officers in use of force had no choice but to agree.