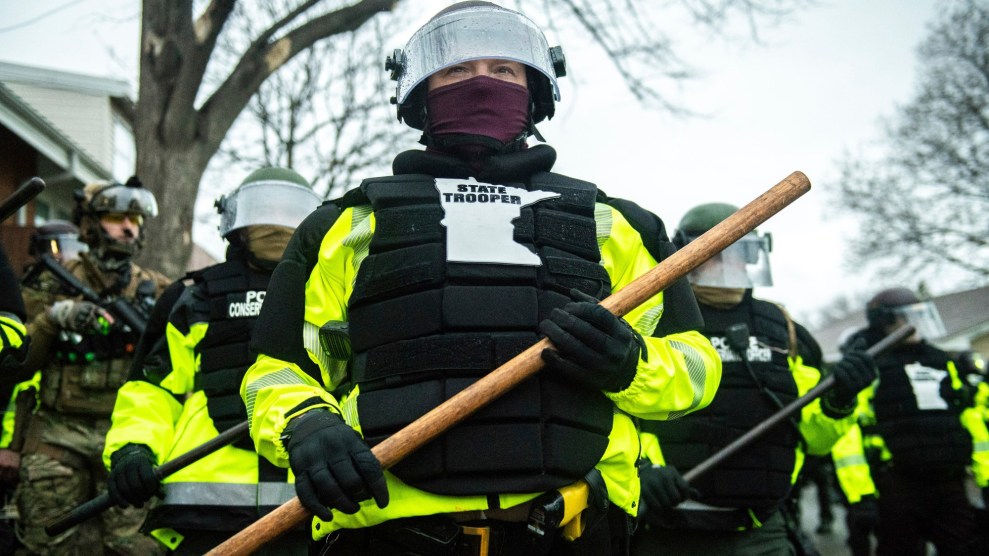 Just 10 miles away from where the state of Minnesota is prosecuting former Minneapolis police officer Derek Chauvin for the murder of George Floyd, officer Kim Potter, who is white and a 26-year veteran of the Brooklyn Center, Minnesota, force, killed a 20-year-old Black man. Last weekend, Daunte Wright was pulled over for driving with expired plates, when police found a warrant for unpaid fines. When Wright tried to get back in the car, Potter fired one shot, killing him. She claimed she was reaching for her Taser and pulled out her gun instead. The juxtaposition is jarring: While one police officer stood trial for the death of a Black man, another cop kills yet another Black man.

The Chauvin trial has been making extraordinary headlines, with law enforcement colleagues testifying that Chauvin’s actions were not justified when he kneeled on Floyd’s neck for approximately nine minutes until he died. A few headlines declared that these admittedly powerful testimonies represented a “crack in the blue wall,” a euphemism for the culture of secrecy surrounding policing, especially when it comes to violence. But after Wright was killed nearby, the police department flew a Thin Blue Line flag at their station to demonstrate not their service to the public but their solidarity with each other. There are no cracks in that blue wall; it’s firmly intact. Police officers rarely end up on trial for killing civilians. But if the jury finds Chauvin guilty and the judge doles out punishment, it won’t be because society has reckoned with the problematic and pervasive realities of policing. It’s time to stop framing the trial of Derek Chauvin as a precedent or a symbol of change; it’s merely an aberration.

The fact is that for every Black person whose life is cut short and hashtagged, there are hundreds more, of every race, whose deaths go unnoticed by anyone other than their loved ones. According to the Washington Post database, police shot and killed 1,021 people last year. So far in 2021, 213 people were fatally shot by police. (Floyd—and who knows how many others—was not included in that database, because Chauvin’s knee, and not a gun, was the weapon.)

The state of Minnesota has insisted in court that police officers and their methods are not on trial, just the actions of one. Technically, they’re right—but their argument is missing the point. Police violence can’t be treated as a problem involving various individual officers. The issue isn’t just that Chauvin kneeled on Floyd’s neck until he died, or that Potter shot Wright during a so-called routine traffic stop, but rather that since its inception, the system of policing in America was designed to enable this kind of violence.

A look back at the history of American policing shows how its purpose has always been to enforce the racial order. And that goes a long way to explaining why, even after every unfortunate video of police violence goes viral, police violence continues. The genesis of law enforcement as we know it today can be found in the system of slavery. In the 17th century, slave patrol units were created to police enslaved people, so if they were caught outside of their master’s plantations without a “pass” or permission from their owners, they were subject to beatings and torture. After the Civil War and the end of the formal system of slavery, white vigilantes like the Ku Klux Klan continued this reign of terror on freedmen. The Jim Crow era brought about Black Codes, which were racist and discriminatory laws enforced by police officers. After the civil unrest during the summer of 1967, President Lyndon B. Johnson organized the Kerner Commission to study violence in Black neighborhoods. The 1968 report concluded that the problem was racial injustice, poverty, and police brutality. White America, however, was not sympathetic to the commission’s findings, and a few months after its release, Rev. Dr. Martin Luther King Jr. was assassinated, leading to more uprisings. The federal government responded by sending more heavily armed police into Black neighborhoods to crack down on the unrest. Today, police are in our neighborhoods and schools, and on our streets—with essentially the same purpose.

Contrary to popular belief and TV cop shows, police don’t spend that much time solving murders or other violent crimes. The New York Times found that in New Orleans, Louisiana; Sacramento, California; and Montgomery County, Maryland; police officers only spend about 4 percent of their time responding to murders or assaults or other forms of serious crime. Mostly, cops are called to the scene of car accidents, mental health crises, and routine traffic stops. Their codes of conduct are often written in a way that provides a lot of leeway in how they interact with the general public. Don’t shoot into a moving vehicle…unless you really have to. Don’t restrain a suspect…unless you feel your life is in danger. The presence of weapons and the emphasis on an individual officer’s personal experience are a recipe for police interactions often to turn deadly. Plus, for many people, the mere existence of Black bodies constitute a threat. So it becomes less surprising, though no less appalling, that George Floyd’s use of a counterfeit $20 bill at a convenience store would turn deadly.

A system such as this, that is so deeply embedded in society and extends back to one of its original sins, will not be undone by the trial of one violent man in uniform. This country has built an entire system dedicated to maintaining the racial hierarchy, often at the expense of marginalized people. Nor will this one trial be a referendum on policing. The parade of cops testifying that Chauvin was wrong in his actions is not a harbinger of a transformed approach to policing. It is merely law enforcement officials correctly wanting to distance themselves from the mockery Chauvin made of Floyd’s rights. It allows police, and society as a whole, to make Chauvin the problem, instead of traditions and deeply embedded practices of American policing. For every cop who told the court that Floyd’s death at the hands of police was unjust, many more will kill or inflict needless suffering on another Black man. And, as usual, there won’t be a trial, much less a reckoning.