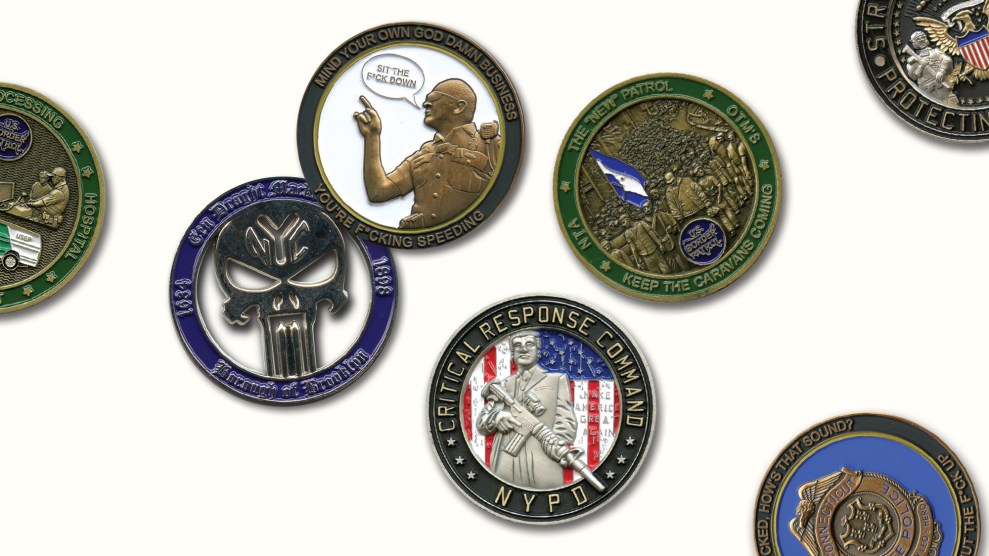 The first military challenge coins, one story goes, were handed out in 1969 by a US Army colonel to build camaraderie in his Special Forces unit. He took the idea from a National Guardsman who had required his troops to always keep a sixpence coin on them in order to buy drinks for their buddies. (Soldiers caught empty-handed during a “coin check” typically must buy a round.) By the 1980s, the silver dollar–size medallions had taken off in the military and beyond. Corporations gave them out to employees. Numismatists collected them. And as cops began equipping themselves and acting more like soldiers, they started minting their own. These law enforcement challenge coins often embrace the unpolished side of the “warrior cop” ethos—the violence, racism, and impunity that have sparked our current reckoning with American police culture.

1. Coppers’ Pennies: Official challenge coins tend to be shiny and inoffensive. But unofficial coins often celebrate cops behaving badly. During a traffic stop in May 2020, Connecticut State Trooper Matthew Spina screamed obscenities and placed his hand on his gun while ordering a motorist to get out of the car. “You’re fucked,” Spina yelled in a video captured by the driver. “How’s that sound?” Spina was suspended, yet in a challenge coin made for his fellow law enforcement officers, he was immortalized as “Every LEO’s hero.” (A spokesperson for the Connecticut State Police said, “The coin does not represent our values.”) Other coins have commemorated “blue flu” walkouts and the riot squads (“hats and bats”) that responded to Baltimore’s Freddie Gray protests in 2015 and the George Floyd protests in 2020. A recent one reportedly made by a former Louisville officer shows nightclub-wielding cops in front of the flaming skyline of the city where protesters took to the streets after Breonna Taylor was shot to death in a botched police raid.

2. No Quarter: With 36,000 cops, New York City is rolling in challenge coins. Coins have been struck to honor an officer who shot and killed four people and commemorate the harassment of a “rat” who blew the whistle on internal corruption. In 2017, members of the Police Benevolent Association made a coin to raise money for a wounded officer from the 67th Precinct in East Flatbush, Brooklyn. One side was embossed with a Jamaican flag and the phrase “Fort Jah”—a racist nickname for the neighborhood, which has a large West Indian community. A caption read: “For those who like hunting there is no hunting like the hunting of man.” One version included an image of a Black man being cornered by armed officers with the inscription “LET THE GAMES BEGIN.” Several NYPD Gang Squad coins feature the logo of the comic book vigilante the Punisher, whose co-creator has called out its use as a symbol “co-opted by forces of oppression and to intimidate black Americans.” Asked about one of the Punisher coins, an NYPD spokesperson told the New York Daily News that “the idea that it encourages officers to be anything but professional and duty-bound is ridiculous.”

3. Heads and Tales: It’s not just cops who have embraced challenge coins. In 2019, ProPublica found a coin circulating among Customs and Border Protection officers that depicted a mass of people marching under a Honduran flag. “keep the caravans coming,” it read, referring to the Central American migrants President Donald Trump had demonized as part of his crusade to close the US-Mexico border. (CBP said this coin was “not officially approved.”) Another coin for border patrol agents is embossed with a grinning skeleton pointing two smoking pistols; another shows Trump in a CBP uniform with the legend “protect the border or close the border.”

4. Chump Change: Presidents since Bill Clinton have dispensed challenge coins. Not surprisingly, Trump broke the mold with a blinged-out medallion featuring an image of Mar-a-Lago as well as a collectible with portraits of him and North Korean dictator Kim Jong Un (yours for $100 at the White House Gift Shop). The president is also the subject of many unofficial coins, including one for the NYPD counterterrorism unit that protects Trump Tower. It features a golden relief image of the man who’s called himself the “chief law enforcement officer of the federal government” cradling an assault weapon, looking ready to stand in the middle of Fifth Avenue and shoot someone.