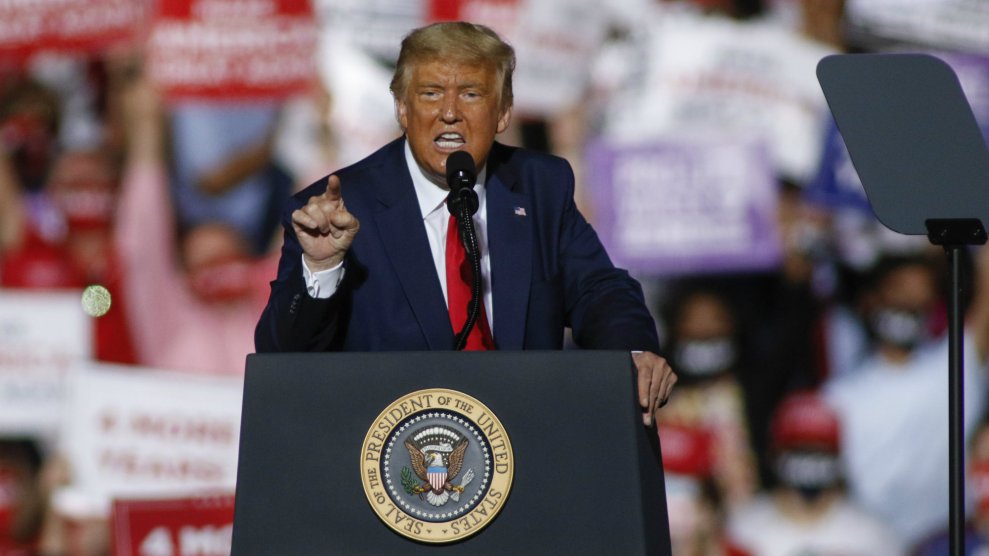 With less than two weeks remaining before the election, and President Donald Trump trailing former Vice President Joe Biden in the polls, Trump is traveling to battleground states and holding rallies with his often unmasked and often not socially-distanced base. His closing argument appears to be more of the same: He’s been the very best president America has ever seen, especially in his handling of the coronavirus pandemic. Meanwhile the death toll climbs to numbers once thought unimaginable.

Trump’s presidency will be remembered for so many things—the rampant corruption, the dismantling of our public institutions—but nothing more deadly than his disastrous response to the pandemic. Whether or not he is defeated, however, the post-election period will be especially lethal—and not just because of the anticipated spike in COVID-19 cases.

The Trump administration announced in 2019 that the federal government was resuming its executions. This summer, while the pandemic was still raging and millions of people continued to be forced to upend their normal lives, the DOJ carried out executions for the first time since 2003. So far, seven people have been put to death by the United States at the federal prison in Terre Haute, Indiana, and last week, the DOJ announced two more executions scheduled for this year. That will bring the total number of executions taking place during the period between Election Day and the inauguration of a new president to three.

Whether or not he is defeated, however, the post-election period will be especially lethal—and not just because of the anticipated spike in COVID-19 cases.

According to a 2018 Gallup poll, 60 percent of Americans believe that life in prison is more fitting retribution for murder than capital punishment, which has been proven to be racist, arbitrary, expensive, unjust, and not a deterrent for crime. But Trump has always been a fan. In one of his first political public acts, he took out ads in New York papers calling for the death penalty for five Black and Brown teenagers falsely accused of a well-publicized Central Park rape in the 1980s. Although they have since been exonerated, Trump continued to insist they were guilty as late as 2016. As president, when Trump heard that Singapore was considering the death penalty for drug traffickers, he suggested the United States adopt the same policy. It’s one of the few areas where he’s been remarkably consistent. If Trump thinks protesters who tear down Confederate statues deserve ten years in prison, it’s logical that a felony should be punishable by death. (Unless it was committed by someone in his immediate circle or by a white armed 17-year-old with a grudge against racial justice protesters.)

Three people will be put to death in November and December. Orlando Hall, who will be executed on November 19, was convicted in 1995 for the kidnap, rape, and murder of Lisa Rene. Hall, who is Black, was sentenced to death by an all-white jury. He also has the dubious distinction of being one of the first people sentenced to death under the 1994 Crime Bill. The sweeping criminal justice bill, co-authored by Joe Biden, expanded crimes that could be eligible for capital punishment, including kidnapping.

The first woman executed by the United States in 67 years will be put to death on December 8. Lisa Montgomery was convicted for the 2004 murder of Bobbi Jo Stinnett and the kidnapping of Stinnett’s baby. Montgomery went online and befriended Sinnett, who was eight months pregnant. She then visited her home under the false pretense of looking at the puppies Sinnett was breeding. Montgomery strangled the victim, cut open her stomach, and took the baby to claim as hers. When she was a child, Montgomery had been the victim of sexual abuse at the hands of her stepfather and as a result suffers from several mental illnesses. “Lisa Montgomery has long accepted full responsibility for her crime, and she will never leave prison,” Kelley Henry, a federal public defender and attorney for Montgomery said in a statement. “But her severe mental illness and the devastating impacts of her childhood trauma make executing her a profound injustice.”

Two days later,  Brandon Bernard will be executed for the 1999 killing of two Texas youth ministers Stacie and Todd Bagley. Bernard was 18-years-old when he committed the crime. His co-defendant, Christopher Vialva, was executed by the federal government in September.

COVID has deeply affected the criminal justice system, especially in prisons where there have been a number of outbreaks leading to deaths of inmates. Correctional facilities, because of crowded unsanitary living conditions, are the perfect breeding ground for an infectious virus. Like the rest of the federal government, the US Bureau of Prisons, the agency responsible for federal inmates, did an inadequate job keeping staff and inmates safe. Most states paused executions when the pandemic began, but the federal government was the exception, and the rapid pace of executions may have led to a coronavirus outbreak. As I wrote in September:

Last week, two inmates at the federal prison complex in Terre Haute, Indiana, died from the coronavirus. “Those deaths were part of a larger outbreak in the wake of the federal government’s decision to carry out an unprecedented number of executions there these past few months during a deadly pandemic,” Cassandra Stubbs, the director of the ACLU’s capital punishment project said in a statement. “The government’s rush to kill has caused senseless risk for incarcerated people, prison staff, and everyone who lives in Terre Haute, Indiana.” According to BOP’s data, more than 40 inmates have tested positive for the coronavirus and several have been hospitalized.

Despite the outright lies from Trump claiming that the spread of the virus is slowing down and a vaccine is just around the corner, public health experts are warning that the next few months will be the hardest phase of the pandemic. The US is already seeing cases rise (again), Wisconsin has set up a field hospital for overflow coronavirus patients, and health care workers in the state have warned that their hospitals soon could become overwhelmed.

But while experts are predicting a grim winter, the Republicans, bracing for defeat in the polls, have opted to simply let millions of people suffer. Although Trump has gone back and forth on another round of stimulus relief for desperate Americans, Senate Majority Leader Mitch McConnell (R-Ky.) has made it abundantly clear that he’s not beholden to his constituents. Although another round of stimulus checks is wildly popular across the political spectrum, McConnell has stalled any deal before the election, much less during the lame duck session. After all, the decimated economy would be a fine problem for the hypothetical Biden administration to grapple with during its first hundred days.

As cruel as the last four years have felt, as impossible as it has been to parse what it means to mourn 221,000 lives and counting—many of them lost to hubris, greed, and partisan politics—everything the country has endured over the last seven months may foreshadow what’s to come. The cold weather leading to more indoor gatherings coupled with pandemic fatigue will likely cause coronavirus cases to surge in November and December, while finally peaking in January, according to experts. They predict the death toll could reach 400,000 by the end of the year. If Biden beats him, Trump’s final act of rushing executions during a pandemic would be fitting: An unpopular president exacting an unpopular punishment against the backdrop of an unimaginable death toll.