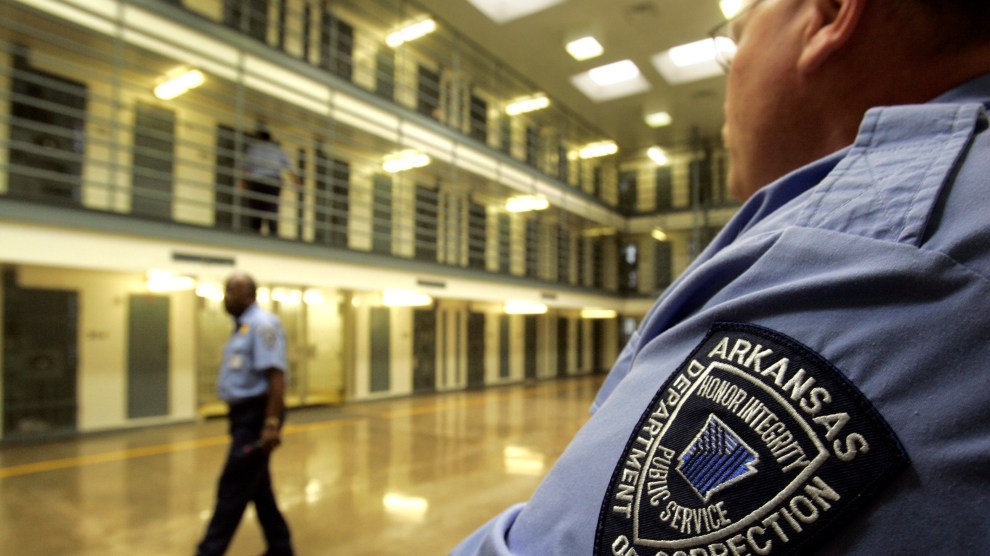 Guards patrol a cell block at the Cummins Unit prison in Arkansas in 2009. Danny Johnston/AP

In late April, Marco was resting in his barracks at Cummins Unit prison in Arkansas, sick with COVID-19, when he overheard something unusual. A correctional officer distributing soap and toilet paper to the inmates mentioned that multiple officers had just tested positive for the virus. Marco, who requested that we not publish his last name while he’s still in prison, recalls hearing the officer say, “All of us got it, but they’re telling us to work anyway if we’re not showing symptoms.”

Most of the men in Marco’s housing unit had tested positive for the virus in mid-April, putting them at the center of one of America’s biggest reported outbreaks. More than 900 men in the prison were infected. So it didn’t surprise him that officers were testing positive too. But over the next couple of weeks, as his sense of smell returned and his legs stopped aching so terribly, Marco continued to worry about what the officer said: If infected guards were continuing to work at the prison while they were contagious, could he get sick a second time? “How is the virus gonna ever leave if they’re still allowing people that are positive to come in?” he wondered.

“How is the virus gonna ever leave if they’re still allowing people that are positive to come in?”

As Marco, 41, recovered in early May, more information about the staffing policy came to light. The Arkansas Department of Corrections, facing a lawsuit about prison conditions during the pandemic, told a court that due to a severe staff shortage, correctional officers who are currently infected are permitted to clock in at certain prisons as long as they are asymptomatic and wear a face mask. But since asymptomatic carriers can still spread the disease, attorneys for incarcerated people in Arkansas worry the policy will worsen infection rates. Eldon Vail, a former corrections chief in Washington state who testified on prisoners’ behalf, said he had studied prison conditions around the country and knew of no other state that asked infected officers to work. “It’s dangerous,” says Cristy Park, an attorney at Disability Rights Arkansas who helped file the lawsuit, along with attorneys from the ACLU and the NAACP Legal Defense Fund.

In Arkansas, officers who work while contagious must take certain precautions: According to a memo from the Arkansas health department, submitted to the court as part of the lawsuit, they may only enter barracks that house inmates who already tested positive. They must maintain six feet of space, and abstain from mingling with coworkers in the break room. “You are to travel directly from home to work with no excursions, detours, or stops,” the memo, signed by state epidemiologist Jennifer Dillaha, explained. “If you begin to have symptoms such as fever, cough, or trouble breathing, or if you otherwise feel sick, you must immediately notify your supervisor and immediately leave.”

The Arkansas corrections department defends its policy. Solomon Graves, a spokesperson, told Mother Jones that the rules are based on a Centers for Disease Control and Prevention guidance for “critical infrastructure workers.” The federal guidance says that as long as these workers are asymptomatic, they can keep working after “potential exposure to COVID-19,” which the CDC defines as coming into close contact with someone who is believed to have the disease.

But when asked about the Arkansas policy, a CDC spokesperson did not condone it. “CDC guidelines state that if staff test positive, they should self-isolate at home until they have met the CDC criteria for release from isolation in consultation with their physician,” CDC spokesperson Bert Kelly told Mother Jones. The federal guidance for critical infrastructure workers does not recommend that people continue to work immediately after testing positive themselves. The CDC recommends that asymptomatic people should stay home for at least 10 days after testing positive, or until they test negative twice in a row.

Attorneys for the ACLU, the NAACP, and Disability Rights Arkansas are asking a federal court to prohibit correctional officers in Arkansas from working while they’re infected, as part of the lawsuit they filed, which also demands better access to cleaning supplies and medical care for prisoners during the pandemic. But in May, US District Judge Kristine Baker declined to issue an injunction temporarily blocking contagious correctional officers from working. The judge said she was concerned about reports that some officers were not always wearing masks, but added that attorneys had not proved that requiring infected staffers to work violated prisoners’ rights. “It is impossible to imagine any employer permitting or requiring COVID-19 infected employees to work while they are infectious and can spread the virus to others,” attorneys for the three groups wrote in court documents. “But, as demonstrated in this case, the substantial risk of infection did not deter [the corrections department] since that risk would be borne primarily by prisoners.”

Some local lawmakers are concerned. Sen. Joyce Elliott, a Democrat who has focused on improving prison conditions, says the state legislature’s Black Caucus met to discuss the staffing practice. Even if contagious officers take precautions, she worries they may spread the disease in the prison or community, especially if they need to stop for gas on their way to and from work. According to court documents, one officer at Grimes Unit prison who tested positive was deployed to work while he was infected at Cummins Unit, about two and half hours away. “I don’t know of any other employers who are asking their workers to come to work if they are positive—it’s only our prison system,” Elliott says. “It sends a message about how we value certain lives more than others.”

Mother Jones reached out to several correctional officers at Cummins Unit, but none agreed to an interview. Zachary Crow, who directs an advocacy group called Decarcerate and has spoken with officers about conditions during the pandemic, says that at least two of them have quit because of the staffing policy. “These people are entering the prison—they’re gonna be interacting with other guards, they’re gonna be touching stuff,” Crow says. “There’s no way they’re completely isolated,” adds Reagan Stanford, another Disability Rights Arkansas attorney. The corrections department says officers who test positive are only permitted to work in areas with inmates who have tested positive and are not allowed to interact with other inmates and staffers who have not tested positive.

As of March, the Arkansas’ corrections department reported 651 vacancies.

Arkansas prisons, like many prisons around the country, have struggled with staff shortages for years because of low pay and dangerous working conditions. As of March, the state’s corrections department reported 651 vacancies. And attorneys filing the lawsuit have complained that staff shortages have led to disruptions during the pandemic, including delays feeding people. But they argue that asking a small number of contagious officers to work will do little to fix these problems while potentially exposing many more people to the virus. “If the [corrections department] is experiencing staff shortages, they should consider following the path of the State of Ohio who have brought in the National Guard to supplement their staffing levels,” Vail, the former corrections chief in Washington, suggested to the court. In early May, Dexter Payne, the director of the corrections department, told the court that fewer than 10 asymptomatic officers had reported to duty at Cummins Unit.

Marco, who is 20 years into a life sentence, says that officers who test positive try to avoid the housing unit and spend most of their time in other parts of the prison like the control booth. But he still worries. He tries to stay in his cell as much as possible. Some men in his barracks are still sick. When he got a sore throat a few weeks ago, he struggled not to panic, afraid he had been infected again. “We’re starting to see people die around here,” he says. “Yes, I have a life sentence, but I don’t have a death sentence. I don’t want my life to end in prison from COVID-19.”