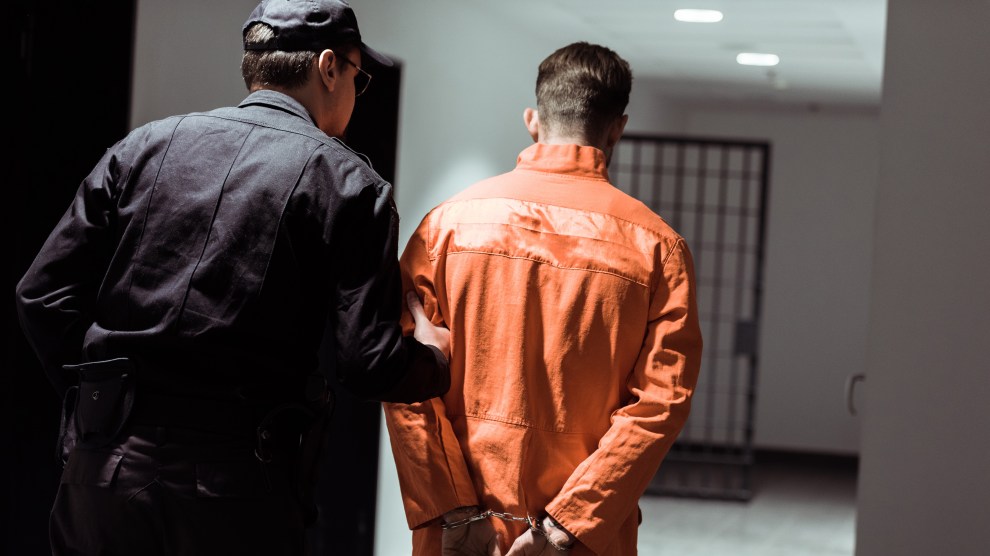 Ray Coleman Jr., a federal prison officer, grew uneasy as he entered the hospital in Tallahassee, Florida, last weekend to pick up an inmate recovering from strep throat. The hospital housed multiple patients with COVID-19. Coleman was tasked with escorting the man back to the prison complex, where the disease, if it entered, could quickly spread among the hundreds of high-risk people incarcerated there—and ultimately boomerang back into the community.

In the surrounding city, officials ordered people to stay inside, avoid gatherings, and forgo appointments. But movement in and out of the prison continued: Newly convicted people arrived to start their sentences; some inmates returned from court hearings in other towns where they were appealing their cases; some transferred in from prisons around the country. “Everyone else is stuck at home,” says Coleman, referring to the shelter-in-place orders. “So why are we moving inmates?”

“Everyone else is stuck at home. So why are we moving inmates?”

The country’s 122 federal prison facilities, like state prisons and jails, are now in the thick of the coronavirus crisis. At least 57 federal inmates and 37 prison staffers have tested positive; at least three of these inmates have died. And a shortage of testing makes these numbers unreliable: Many more undiagnosed prisoners sit in isolation or quarantine with symptoms of COVID-19. On Tuesday, the Bureau of Prisons announced that for 14 days, even healthy inmates will be required to spend most of the day in their housing units. But Coleman and other prison staffers around the country—all speaking in their capacity as members of their union, the American Federation of Government Employees Council of Prison Locals—say the lockdown will do little to stop the virus as long as the agency continues to move inmates in and out of prisons and transfer them between facilities, especially given that inmates don’t get tested for the virus before they are moved.

Public health experts have warned for weeks that once coronavirus gets inside these lockups, it will spread at rates far faster than it’s spreading among the general population. Already, that’s happening at jails in New York and Chicago. With this in mind, federal prison unions and members of Congress have been urging the Bureau of Prisons to stop moving so many inmates.

The bureau’s official stance is that, while it has reduced transfers by about 80 percent compared to last year, multiple federal laws, including the Bail Reform Act, require it to continue moving inmates. On Tuesday, Pennsylvania Rep. Fred Keller introduced legislation to give the bureau more power to keep them in place. “While…the rest of the country is working together to stop the spread of this virus by altering and pausing our livelihoods, the Bureau of Prisons must do its part and stop moving potentially sick inmates around the country,” Keller said in a statement. But Congress is not scheduled to reconvene until April 20, so it could take weeks to pass the bill.

At least 57 federal inmates and 37 prison staffers have tested positive.

Which leaves prison staffers who represent their unions raising the alarm. “There’s a lot of anxiety and fear among the staff about what’s going on,” says Ronald Morris, president of the local union at the correctional complex in Oakdale, Louisiana, which has seen the biggest outbreak of any federal prison, including the three deaths. At least 11 inmates at the complex have tested positive, and another 68 were in quarantine for symptoms earlier this week, says Morris; 20 staffers had either tested positive or were waiting for the results of their tests, while the prison continues to admit in new inmates. “We’ve got to lessen this curve,” says Steve Markle, another leader of the national union who works at the federal correctional complex in Terre Haute, Indiana, which specializes in housing inmates with serious preexisting medical conditions. “I have employees who just had transplants, who have lupus, who are just finishing up chemotherapy for cancer,” says Coleman. “I just feel like everyone needs to sit in place where they’re at right now.”

That’s not to say federal prisons aren’t being careful about who comes in and out. Correctional officers and other staffers must have their temperatures checked before they’re allowed into work. And when new inmates arrive, they are quarantined for two weeks. At some complexes, they’re kept in a designated housing unit with other sick or quarantined prisoners, each with their own cell and bathroom.

Prison staffers in the union question the effectiveness of these quarantines, even in complexes with individual cells and toilets. Prisoners still need to leave them to shower. The cells have space under the door to allow food to be slipped in. And if the ventilation system is poor, people still share the same air. On top of that, new inmates arrive regularly, and the two-week quarantine clock does not restart for those already inside. “It’s a way to say we’re doing something, but it’s not really effective,” says Coleman. Even the lockdown may do little to stop infections, he says, because many prisoners live in crowded dorms with beds just a couple of feet apart.

Making matters worse, federal prisons—like hospitals and other institutions around the country—are dealing with a severe shortage of masks and other personal protective equipment. Prisons often ban hand sanitizer because it contains alcohol. As agency-owned buses filled with inmates shuttle from complex to complex, union members at the Tallahassee prison recently asked their warden to give the driver some sanitary wipes, to scrub the seats in between the standard weekly cleanings.

And a lack of COVID-19 tests makes it impossible to measure the scope of the problem. The national union reports that some prison complexes housing several thousand inmates received only around five tests. “A lot of places aren’t even going to test because they only have a handful of tests. They are just assuming and not actually testing,” says Brandy Moore, secretary treasurer of the national union.

“They only have a handful of tests. They are just assuming and not actually testing.”

The Bureau of Prisons’ coronavirus response plan says the agency is working to “significantly decrease” the movement of inmates, but a spokesperson said it is required to accept newly sentenced people into its custody, and to make transfers to ensure prisoners are housed in suitable conditions with appropriate medical care. The spokesperson added that the agency provides masks and other protective equipment in accordance with guidelines from the Centers for Disease Control and Prevention. And inmates undergo a medical screening before moving in or out of a facility. Staffers check them for symptoms like a fever, cough, and trouble breathing. But they usually aren’t tested for coronavirus, even though not everyone who catches it experiences symptoms. It “is clear that BOP can no longer guarantee transferred inmates are free of COVID-19,” Rep. Keller wrote in a letter to the bureau’s director before introducing the bill.

Stopping all inmate movement likely wouldn’t be feasible; prisoners still need to be transported to hospitals for emergency medical procedures, for example. But union members argue that routine checkups outside the facility could be postponed or handled by medical officers inside the prison, and court hearings could be conducted via video conferencing—something the Bureau of Prisons spokesperson said the agency was now pushing for. Prisons could also delay accepting newly convicted inmates by allowing them to remain at home for more time after their sentencing. And the bureau could postpone inmate transfers between facilities, they argue. “We just don’t feel the bureau is taking this seriously enough,” says Markle.

When Coleman returned from the Florida hospital last weekend, he brought the inmate with strep throat to the medical staff at the prison for a screening. The health care workers cleared the man and returned him to the general population.