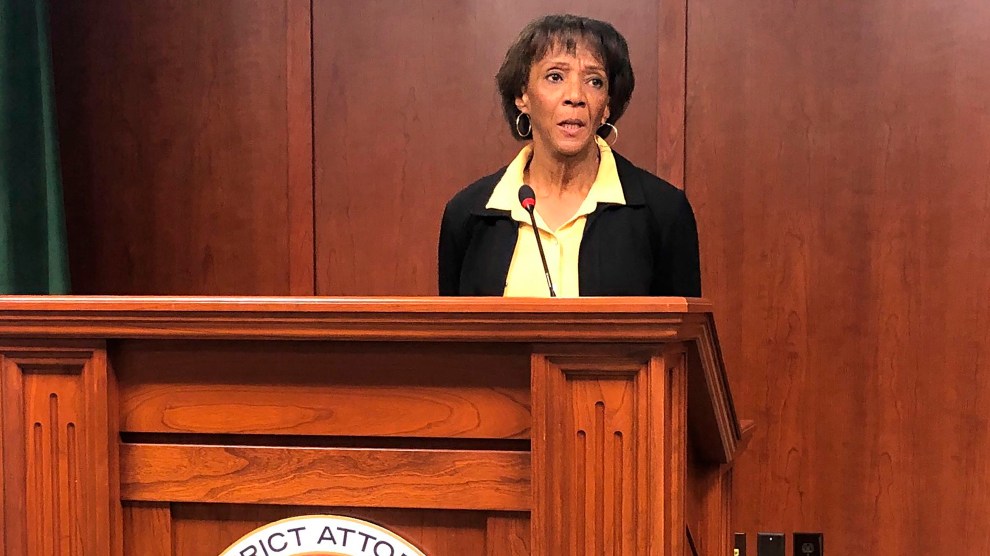 District Attorney Jackie Lacey speaks Monday at a press conference after her husband was filmed pointing a gun at protesters at her home.Stefanie Dazio/AP

For years, Black Lives Matter members have protested against Los Angeles District Attorney Jackie Lacey, the first African American and first woman to work as the county’s top prosecutor. Lacey has declined to file charges against hundreds of police officers and sheriff’s deputies who have shot and killed civilians since she took office. So every week, members of Black Lives Matter LA demonstrate outside her office to call for her ouster. Tensions between Lacey and the activists have been mounting ahead of the primary election.

And the situation became especially heated on Monday morning: When a group of BLM protesters showed up at Lacey’s house and rang the doorbell, they were unexpectedly greeted at the door by a man holding a gun.

The man was Lacey’s husband, David Lacey. A video appears to show him pointing what looks like a handgun at Black Lives Matter organizer Melina Abdullah, a professor at Cal State LA, who shared the video afterward. Two other protesters stood beside her. “I will shoot you. Get off of my porch!” he said in the video. Abdullah asked him to let Lacey know that Black Lives Matter members were outside. About 30 people had arrived before dawn to protest what they say is her refusal to meet with them, and had arranged chairs to pray on the sidewalk. “I don’t care who you are,” the man said, lowing the gun. “Get off of my porch!”

Los Angeles police soon responded to Lacey’s home but did not make any arrests, according to the Los Angeles Times. Protesters remained outside an hour later, carrying signs that said “#ByeJackie.” At a press conference later in the day, Lacey confirmed that her husband had pulled a gun on the protesters and said that he did so out of fear: During her tenure as district attorney, she said, she had received death threats and been followed. Lacey said that her husband was “profoundly sorry.” “He meant no one any harm,” she told reporters. “It was just him and I in that house, and we really didn’t know what was about to happen. I, too, am sorry if anybody was harmed…I just want to live in peace and do my job.”

I’m front of DA Jackie Lacey’s house for that community meeting she promised with the @BLMLA crew. Rang her bell to invite her.

Her husband pulled a gun, cocked it, pointed it at my chest and said “I’ll shoot you. I don’t care who you are.” @WP4BL @RealJusticePAC @shaunking pic.twitter.com/WtazUWSJIC

The incident comes one day before the March 3 primary, where Lacey faces two challengers, former San Francisco District Attorney George Gascón and Los Angeles public defender Rachel Rossi, who have pledged to take a tougher stand against police after shootings. Patrisse Cullors, a co-founder of the Black Lives Matter movement, has described the election as “the single most important DA race in the country.”

As I explored in this deep dive about the primary race, Black Lives Matter protesters say Lacey has refused to meet with them ever since a contentious town hall in 2016, where some members of the audience called her a “race traitor” and chanted “You help killer cops!” She walked out of that event early.

“The collective grief and despair of our marginalized communities continue to grow as they are ignored. Jackie Lacey committed to meet with family members and has broken that promise,” challenger Rossi tweeted on Monday. Speaking at the press conference, Lacey said she had offered in the past to meet with Black Lives Matter either one on one or in a small group, as opposed to in larger public gatherings. “They have rejected those offers,” she said. “It seems like what they like is to embarrass me and intimidate me. My hope is that one day that might change.”

The primary race could have a big impact on how Los Angeles, which sees more fatal officer-involved shootings than just about anywhere else in America, deals with police violence. Prosecutors led by the district attorney are the ones who decide whether to press charges against cops who shoot. More than 500 people have been killed by on-duty officers during Lacey’s tenure, and only one officer has been prosecuted.